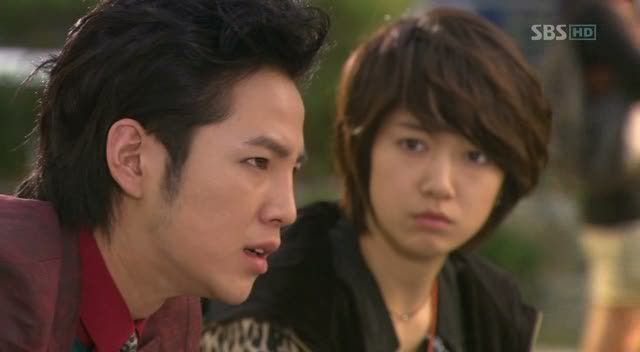 You’re Beautiful Cast: Who is in it?

Park Shin-Hye (‘The Heirs‘, ‘Pinocchio’, ‘Doctors’, and ‘Memories of the Alhambra’) stars as Ko Mi-Nyeo or Gemma (female) and Ko Mi-Nam (male). She wishes to become a nun but later joins the band A.N.JELL in the disguise of her twin brother.

Jang Keun-suk (‘Love Rain’ and ‘Switch’) plays Hwang Tae-Kyung. He is the lead vocalist and guitarist of A.N.JELL. Hard-hearted and cold on the outside, he gradually begins developing a romantic inkling for Mi-Nyeo once he discovers her true identity.

Jung Yong-Hwa (‘The Package’ and ‘One Fine Day’) is Kang Shin-woo, the rapper, bassist, and keyboardist of A.N.JELL. Kind and caring, he was the first to find out that Mi-Nyeo is actually a girl. He, however, keeps the secret to himself, unknown even to Mi-Nyeo, and acts quite protective when around her.

Lee Hong-gi (‘A Korean Odyssey‘) plays Jeremy, the cheerful and always positive vocalist and drummer of A.N.JELL. He starts getting attracted to Mi-Nyeo, thinking she is a boy and gradually becomes confused about his sexuality.

Uee plays the character of Yoo He-Yi, an actress and pop singer. Kim In-Kwon is Ma Hoon-Yi (Mi-Nam’s manager) and Kim Sung-Kyung is Mo Hwa-ran (a renowned actress and singer and Hwang Tae-Kyung’s mom, who left her son in order to be with her lover — who coincidently happens to be Mi-Nyeo’s late father).

You’re Beautiful Plot: What is it about?

Ko Mi-Nyeo and Ko Mi-Nam (both played by Park Shin-Hye) are twins. The brother and sister duo had been living in an orphanage since their childhood days, following the death of their father. As they grow up, Mi-Nam becomes a famous musician while Mi-nyeo lives in a junior nun dorm and hopes to become a nun. One day, Mi-Nam after giving a successful audition is invited to join the musical band A.N.JELL. But he needs to undergo treatment in order to rectify a previous plastic surgery that went wrong. This requires that he stay in the US for a month.

Meanwhile, Mi-Nam’s manager, Ma Hoon-Yi requests Mi-nyeo to pose as her brother and join the band until he recovers. Mi-nyeo reluctantly accepts, thinking that media coverage would give her a chance to search for her lost mother. So, finally, she becomes a part of A.N.JELL and meets its members, the haughty Hwang Tae-Kyung, kind Kang Shin-woo, and cheerful Jeremy.

Tae-Kyung is previously against Mi-Nam’s arrival and leaves no excuse to make life hell for Mi-nyeo. However, Shin-woo and Jeremy quickly become her friends. Tae-Kyung finally uncovers that Mi-Nam is actually a girl and threatens to expose her. But he gradually changes his mind and eventually starts falling for her. Shin-woo and Jeremy also cannot help but start getting attracted to the sweet Mi-Nyeo. However, Mi-Nam still believes she is a guy and this makes him question his sexuality. As Mi-nyeo adapts to this new life of fame, she also discovers her mother’s past, which has a connection to Tae-Kyung.

Meanwhile, Yu Hee-Yi, a shrewd pop singer, discovers Mi-Nyeo’s secret. The former decides to use this piece of information for her advantage and blackmails Tae-Kyung to pretend before the press that they are dating. However, complications arise when Yu Hee-Yi starts falling for Hwang Tae-Kyung.

You’re Beautiful Season 2 Release Date: When will it premiere?

‘You’re Beautiful’ season 1 premiered in Korea on SBS on October 7, 2009. It aired for 16, 60-minute-long episodes and finally wrapped up on November 26, 2009. It was released in several other countries across Asia, including Japan, China, Thailand, Malaysia, Singapore, Indonesia, UAE, and the Philippines. The series was extremely popular in Japan where it aired on Fuji TV, surpassing even the popularity of ‘Winter Sonata’, another acclaimed Korean drama in the country.

‘You’re Beautiful’ also progressed to become a cultural phenomenon, with leading automobile manufacturers offering their cars to be used on the show for promotional purposes. Audi S4 was first launched in this very series. In Korea, it received mediocre ratings but still became a cult classic, after it started streaming on online platforms. There were several remakes as well such as a Japanese version called ‘Ikemen desu ne’ and a Taiwanese adaptation, ‘Fabulous Boys’.

Now, as far as a renewal is concerned, the first point to note here is that ‘You’re Beautiful’ was originally conceptualized as a miniseries. The plot has a definite conclusion and an all-inclusive storyline. There’s rarely any scope for it to go on for multiple seasons. Additionally, even after almost a decade since its last air date, we do not have any announcement for another season from the creators — in spite of multiple petitions from fans demanding a new installment. Hence, the chances of it being commissioned for a season 2 are almost zero. However, if the makers, by any chance, decide to go for a revival (considering its international popularity), we will update you about ‘You’re Beautiful’ season 2 release date.

Check out the official trailer for ‘You’re Beautiful’ season 1 below.