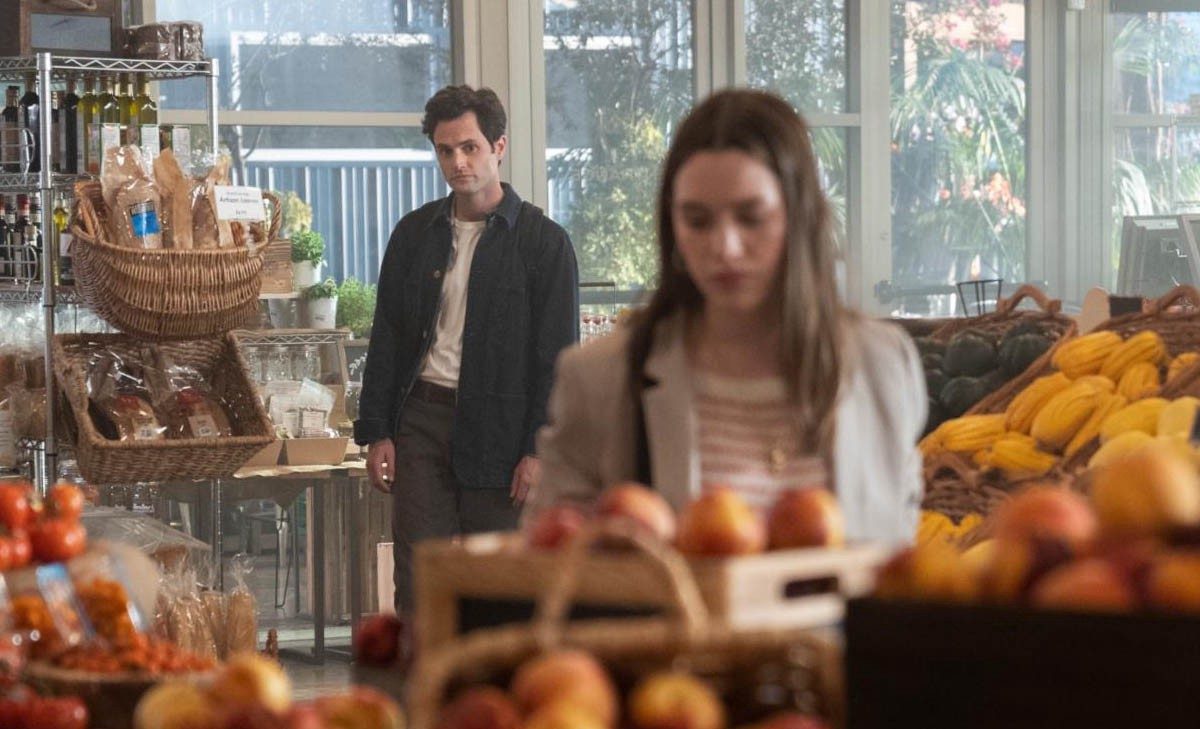 They say all is fair in love and war, and there is only one person who will take this to his heart like no other – Joe Goldberg. ‘You’ is a psychological thriller series that chronicles the story of a grade A stalker, Joe, whose quest and twisted obsession to find true love leads to some dark and disturbing consequences. Initially debuted on Lifetime, the show became a smashing hit when it dropped on Netflix in December 2018. The show is a social commentary on the “nice guys” and further opens the door to conversations about toxic masculinity, savior complex, abuse, and stalking.

The show makers leave it up to the audience to decide what they think of his actions instead of imposing their own opinions and biases through their storytelling. Told from Joe’s point of view, the viewers are let in on his inner monologue throughout the show as we see him justify and make sense of his irrational feelings and actions in a disconcerting way that, more often than not, shifts from menacing to downright creepy and spine-curdling territory in no time. For fans wondering when will they see Joe put on his stalker cap again (quite literally), here’s everything we know about ‘You’ season 3!

You’ Season 2 premiered on December 26, 2019, on Netflix. Upon its release, the show ranked number 5 on the most-watched series on Netflix in 2019, which is exceptionally impressive, considering that the second installment arrived in the last week of the year! Following the second season’s success, the streamer officially renewed the show for season 3 in less than a month of its release.

According to Variety, the upcoming season will comprise of ten episodes in a similar fashion to its predecessors. In January 2020, it was stated that season 3 is slated for a 2021 release. Filming is scheduled to commence in November 2020 and conclude in April 2021. If everything goes accordingly and there are no widespread production delays due to the COVID-19 pandemic, we expect ‘You’ season 3 to release sometime in late 2021.

Netflix has confirmed that Penn Badgley and Victoria Pedretti will reprise their roles as Joe Goldberg and Love Quinn, respectively, in season 3. As for the rest of season 3 cast, fans can expect to see Jenna Ortega as Ellie Alves, who plays Joe’s precocious neighbor in season 2. Saffron Burrows who plays Love’s mom is going to be incorporated in the season 3 storyline as well.

In an interview with The Hollywood Reporter, Gamble teased the idea of bringing back dead characters to haunt the living, saying, “And as you saw in season two, I mean Beck was dead and she came back. One of my favorite things to do is bring back a dead person to haunt you. So the door is wide open for everybody’s favorite characters.”

If that’s any indication, we can also see Elizabeth Lail as Beck, Ambyr Childers as Candace, James Scully as Forty Quinn, and Carmela Zumbado as Delilah Alves. On October 16, 2020, Netflix announced that two new cast members have joined the show for season 3. The first name is Shalita Grant (‘NCIS: New Orleans’), as Sherry, a “Mom-fluencer” in Love’s social circle, and the other addition is Travis Van Winkle as Joe’s affluent new friend, Cary.

You Season 3 Plot: What can it be About?

In a departure from The Big Apple setting of the opening season, season 2 takes Joe to Los Angeles in a bid to escape Candace, who he thinks to have successfully murdered previously. Not being able to help his dangerously fatal impulses, Joe turns his attention on a chef named Love Quinn. Only this time around, he’s trying so hard to do it right, but we all know how that works out in his universe. In a massive reveal in the second half of season 2, we learn that Love herself is a murderer, not unlike Joe. She shares the same unnerving mindset as Joe in that she believes her actions are a mere reflection of just how much she cares about her loved ones.

She ruthlessly kills Delilah as well as Candace and then discloses that she’s pregnant with Joe’s baby. All of this dramatically culminates in Forty (Love’s brother) getting caught in the middle of all these dark lies, which unfortunately leads to his untimely death. Reeling from Forty’s demise, Joe and Love move to a suburban area to start afresh with their unborn child on the way. But old habits die hard as we see Joe set his eyes on the neighbor, a bookworm who’s married or at least engaged. We don’t get to see who she is, but that’s from where season 3 might kick-off.

Talking about that last scene, Gamble said, “I think to me, the most important thing about that last scene is just it is confirmation that Joe is still Joe in a way that’s not going to be great for Joe,” she said. “That he has not learned that he cannot just keep looking for the next person to attach his hopes and dreams to that way. It seems clear that he’s falling into some version of that same pattern. I can’t say that we know exactly what a season three would be, but I can say things won’t go well for Joe.”

When asked what they would like to explore in Season 3, she said, “The stakes are pretty high. I have so many questions about Love’s mother who’s incredibly in the picture at the end of the season, like how much she really knows about her children.” She continued, “We wrote [the finale] hoping that we will get the opportunity to tell more story because we’re really excited with the seeds planted at the end of season 2.”