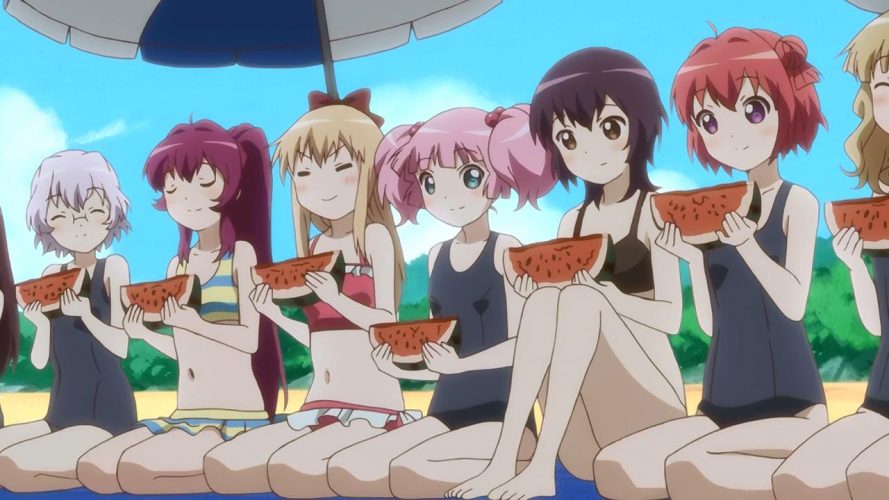 Just months after the announcement, Season 1 of Yuru Yuri was released in Japan on July 5, 2011. It immediately became a hit among fans of the manga series and new viewers alike, and a special episode, titled Yuru Yuri: Doushite, Tomaranai, Tokimeki, Dokidoki, Paradox, Eternal, was released November 16, 2011. Subsequently, much to the delight of fans, the show was renewed for a second season, and Season 2 of YuruYuri was released on July 3, 2012. Three years after the conclusion of Season 2, the show was again renewed for a third season, and Season 3 premiered on October 6, 2015. Since then, fans have been waiting hear news on a fourth season. Here’s everything we know about the prospects of Season 4.

Yuru Yuri Season 4 Release Date: When will it premiere?

Following the release of Yuru Yuri Season 2, Doga Kobo left the responsibility of the show in the hands of another anime studio called TYO Animations, which has handled all subsequent releases. Yuru Yuri season 3 premiered on October 6, 2015 and ran till December 22, 2015, but in the time that has elapsed since then, we have not heard any news on a fourth season.

An original video animation (OVA) special episode released on September 18, 2019. The fact that a special episode released so many years after Season 3 is a sign that YuruYuri still enjoys quite some popularity, and there’s a chance that the show could see a fourth season. If things go well, our best guess is that Yuru Yuri season 4 release date could fall sometime in 2021. We’re keeping our ears open for news on Season 4 of Yuru Yuri, and we’ll update this section as soon as we hear something.

You can stream ‘Yuru Yuri’ on Crunchyroll with its original Japanese audio and English subtitles.

Yuru Yuri is a show which does not have a particularly convoluted plot and it follows a group of young middle schoolers and their daily adventures.

Understandably, Akari is invited by the duo to be a part of the Amusement Club, and she joins without hesitation. Soon after Akari joins, her classmate, Chinatsu Yoshikawa, stumbles upon the trio mistaking the room to be the Traditional Tea Club room. Only when the trio explain to Chinatsu that the Traditional Tea Club doesn’t exist anymore does Chinatsu agree to join the Amusement Club.

Thus begins the story of the four girls, and their activities in the Amusement Club – which serves no purpose apart from entertaining its four members. When they are not busy with schoolwork, the four girls spend most of their time in the Amusement Club, drinking tea and fawning over each other. Over the course of the show, the girls manage to diversify their range of activities, from completing due homework to trips to hot springs and camping outings, and there is never a dull moment in their lives. The show chronicles these activities and is a funny and heartwarming slice of life anime.

Akari Akaza: Supposedly the main protagonist of the show, Akari is a 13-year-old middle schooler whose gloomy start to middle school takes a pleasant turn when she chances upon her childhood friends, Yui and Kyouko, and reunites with them. She soon comes to learn of the Amusement Club and joins enthusiastically, thus marking the beginning of her fun journey through middle school. Akari is shown to be a quiet and polite girl with a small stature, and despite being the main protagonist of the show, she is often sidelined in the activities of the Amusement Club. However, she holds no grudge, and continues to be a willing and enthusiastic member of the Amusement Club.

Kyouko Toshinou: Another main character in the show, Kyouko is a 14-year-old middle school student who studies in the same school as Akari. The co-founder of the Amusement Club, Kyouko is overjoyed when she reunites with Akari and convinces her to join the club. In the show, Kyouko is perhaps the most wild among all four members of the club, and her energetic nature and constant willingness to go wild is a thing which no one else at the club can keep up with. She is also shown to be exceptionally fond of rum raisin ice cream.

Yui Funami: Kyouko and Akari’s childhood friend, Yui is also a 14-year-old middle schooler and is the other co-founder of the Amusement Club. Despite being a co-founder of the club, Yui is nowhere near as wild as Kyouko and is cool-headed girl who serves as the voice of reason in the group. She is shown to be extremely fond of video games, and can often be seen playing video games in her free time. Yui is also shown to be an exceptional cook, and Chinatsu gets addicted to eating food cooked by Yui. Further, Yui is also shown to be quite responsible, and we come to know that she lives alone in an apartment complex despite her young age.

Chinatsu Yoshikawa: The final main character in the show, Chinatsu is a 13-year-old student who is Akari’s classmate. Distinguishable for her pink hair, Chinatsu mistakenly stumbles across the Amusement Club and quickly becomes a member. Chinatsu is shown to be fun-loving, cute, and benevolent at most times, though she does occasionally act in a selfish manner. Owing to Chinatsu’s resemblance to the anime character Mirakurun, Chinatsu is often chased around by Kyouko, who has an obsession about Mirakurun. Further, it is revealed that Chinatsu has a massive crush on Yui, and she often fantasizes about her.