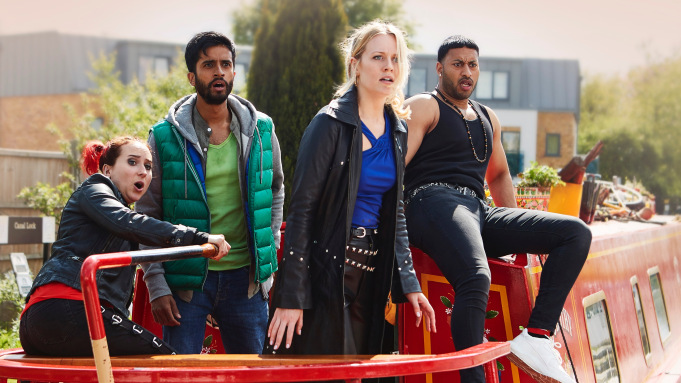 It seems there’s simply no end to shows and films inspired by the popular theme of a zombie apocalypse.  ‘Zomboat!’ is a comedy-drama that airs on Hulu and ITV and is created by Adam Miller (‘The Windsors‘) and Will Hartley (‘Tracy Ullman’s Show’).

Written by Miller, Hartley and Liz Doran, the show follows the aftermath of a zombie epidemic in Birmingham. Sisters Kat and Jo team up with unlikely travel companions Sunny and Amar, in order to flee to safety while being on-board on a canal boat. When these four very different individuals are forced to share living quarters in a tightly packed vessel, they go though disagreements, arguments, and opinion clashes. Along the way, they also fall in love, develop new friendships, and form alliances. Slowly, they realize that even in the midst of peril, there’s no escape from the regular problems that life throws at us.

Paul Mortimer, head of digital channels and acquisitions for ITV2, shared his enthusiasm about the show, saying,: “ITV2 is committed to comedy for younger audiences and we’re delighted to partner with Hulu and Noho Productions to add this fantastically high-concept, home-grown comedy-adventure series to our slate.” According to ITV’s Head of Acquired Series Sasha Breslau, “Zomboat is a gorily funny new comedy with a terrific cast. ITV2 is thrilled to be on board the Zomboat ready to battle the undead”.

The first season of the show was well-received. Now, the question arises: will there be a ‘Zomboat’ season 2? We will delve into that question, but first let’s quickly look into the details of the series.

Zomboat Cast: Who is in it?

‘Zomboat!’ features a promising lead cast, comprising some talented names from the world of UK tv. Leah Brotherhead stars as Kat. She is best known for her roles in the BBC drama ‘Gold’ and ITV’s ‘Vera’. Cara Theobold from ‘Crazyhead’ and ‘Absentia‘ fame plays Jo. Hamza Jeetooa, who is primarily known for ‘Doctor Who‘ and ‘Luther’, enacts the character of Sunny. Rounding up the main cast is Ryan McKen as Amar. He has previously appeared on ‘Game of Thrones‘ and ‘Bancroft‘.

Zomboat Plot: What is it about?

‘Zomboat!’ begins with a zombie apocalypse which is unleashed in the UK city of Birmingham. It then introduces us to Jo, who has recently returned to her hometown and decides to move in with her sister Kat. On the other hand, Kat is a computer game geek who believes in the most bizarre of conspiracy theories. So when Kat tells Jo about the zombie apocalypse, the latter finds it difficult to take her sister’s claim seriously.

Joining them is gym addict Amar, a guy with a knack for tackling problems head-on. His closest, long-term buddy is Sunny — someone who hates society and would prefer passing out the storm from within the comforts of his home. However, these four unlikely characters finally find themselves on-board Dorothy, a narrow boat on the Grand Union canal. They come up with this plan of escaping via water after realizing that zombies cannot swim. As per Kat, this inability of zombies has been an underutilized trait which they should use to their full advantage.

Now, when the group is forced to embark on a journey across the canal in cramped living quarters, they have no choice but to forge friendships and develop alliances amidst occasional arguments and disagreements. The trip also leads to budding romances and makes our protagonists come to the conclusion that even in a zombie apocalypse, people cannot flee from daily problems.

‘Zomboat!’ is a comedy, centered around zombies, and makes for a ridiculous concept. But it is extremely humorous with elements of dark comedy. The story can be enjoyed by anyone, even if he/she does not like zombies. Again, if you are a fan of the genre, you would enjoy it more since it contains multiple references to titles such as ‘The Walking Dead‘. In order words, it pays homage to your favorite zombie-centric shows.

Zomboat Season 2 Release Date: When will it premiere?

‘Zomboat!’ season 1 premiered on ITV2 on October 8, 2019 and wrapped up with its sixth and final episode on November 12, 2019. The series released on Hulu on October 25, 2019. This is the second time that ITV and Hulu have collaborated on the drama series. Their previous jointly commissioned series was ‘Harlots’.

As far as the next season goes, we don’t have an official announcement yet. Though considering the uniqueness of the show, we would be surprised if it doesn’t get another season. If renewed, ‘Zomboat’ season 2 can release sometime in October 2020. We will update this section as soon as we hear more.

You can check out the official trailer for ‘Zomboat!’ season 1 below.