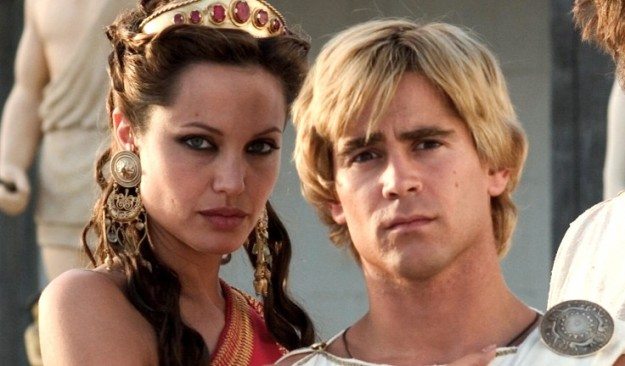 No director sets out to make a bad film. No one. Yet for various reasons there are some films that simply fail because nothing comes together, a performance is the undoing, or the director simply was out of their element. As a former teacher and Director of the Toronto Film School, I have a soft spot for noble failures, because the intent was to make a good film, even a great film. I understand this after years of watching students attempt to make their shorts and when seeing them, despite many strong aspects within, they do not quite work.

So what would be noble failures from Hollywood? What are fifteen films made in the last forty years that were not supposed to fail, that have aspects that are superb but do not quite come together? The films are not failures but neither are they considered to successes. I went back as far as 1970 and came up with fifteen that I feel deserved to be watched despite being failures. There are aspects of greatness in the following fifteen films but I stress, they are not great films…failures all, though the failure is noble because the intent was such.

1. THE GREAT GATSBY (1974): Robert Redford simply lacks the edge and suggestion of danger Gatsby needs in the portrayal. There is something vaguely sinister about the character Jay Gatsby, in a world where he does not really belong, and the actor suggested none of that. Worse was Mia Farrow as the shrill Daisy, leaving one to ask, why would he do anything for her ? Bruce Dern is superb as Tom, and the film looks terrific, but lacks what is so required.

2. SORCERER (1977): When every major actor turned him down, director William Friedkin cast Roy Scheider and went off to the jungles of Central America to make his massive adventure film, a remake of the French classic The Wages of Fear (1953). Though stunning to look at, the bridge scene alone is worth watching the film, and with a haunting score from Tangerine Dream, the film is not really memorable and we never care about the characters.

3. NEW YORK, NEW YORK (1977): Martin Scorsese plunges the audiences into post-war America merged with surrealism and it almost works. What ruins the film in every way, makes it almost unwatchable is the performance Robert De Niro is is annoying, and unbearable to watch. From the first moment he appears De Niro portrays the characfter with such rabid intensity he is off putting. Liza Minnelli blows him off the screen, and reminds us of what a massive talent she was. Not sure what De Niro was trying to play….boor is what came out.

4. HEAVEN’S GATE (1980): So much has been written about the film, so much has been said about the director and his self indulgence and arrogance. So what is good? The score is haunting and lovely, and the cinematography superb. The roller skating scene is one of the most joyous scenes of the eighties, and I liked how we saw educated men running the west and ruining it. Beyond that….well the poster was cool.

5. POPEYE (1980): Talk about bringing a comic strip to life ! Robert Altman does a great job of it, but then for whatever reason made the film a musical with terrible songs, horribly performed, that brought nothing, and I mean nothing to the narrative. Robin Williams was a wonderful Popeye and Shelly Duvall was magnificent as Olive Oyle. But God the music ..

6. CRY FREEDOM (1987): Superb performances from Denzel Washington and Kevin Kline highlight this fine work about Steve Biko, the South African activist murdered in 1978. Rather than focus the story on Biko, drector Attenborough chooses to focus the film on the white man who got his story out of Africa. There was an electric charge whenever Washington was on screen, and when he was not… well..

7. DICK TRACY (1990): Again a comic strip comes to life brilliantly with Warren Beatty using the prime colors for his sets and costumes, allowing the characters to leap off the page and onto the screen. But then he cast Madonna, who, shock….cannot act ! And then of course he allows her to sing…a lot…and then the story kind of stinks….so what looks beautiful is, but it does not mean anything.

8. CHAPLIN (1992): You have an actor geared up to give a brilliant performance, like I mean he is perfect. Robert Downey Jr. was nominated for an Academy Award for his performance as Chaplin but the actor was stuck in a film directed by Richard Attenborough who when he makes a biography makes a greatest hits film leaving out anything remotely dark that might humanize the character. So much about Chaplin is just not here…..

9. HOFFA (1992): There is a long close up for an extended period of time on a headlight in the film and for the life of me, after three viewings I cannot figure out what director Danny De Vito was trying to say with it. He had Jack Nicholson as Hoffa, in the zone, giving a great performance but portraying a character with huge elements of the life we know he lived left out. De Vito attempted to make an epic about Hoffa, but instead by leaving out key elements made a greatest hits.

10. BRAM STOKER’S DRACULA (1992): So much to like, beautiful art direction, costumes, make up, acting and then we have Keanu Reeves as Jonathan Harker with a wandering British accent. We have Anthony Hopkins ACTING all over the place and the director, Francis Ford Coppola made the decision to have Dracula, manifest himself in various shapes and looks, from an ancient old man, to a dapper young man, to a wolf, a wolf beast and then mist…it would have worked beautifully with the first two and only the first two. Still a lot to like.

11. WYATT EARP (1994): Four years earlier Kevin Costner brought back the western genre with the Academy Award winning Dances with Wolves (1990), but this three hour plus epic was a failure for odd reasons that really cannot be explained. It is well acted, directed, written, beautifully produced….it has everything to make it a hit but it was not. Audiences did not find the film, they left it alone and the western again died a little death.

12. ALEXANDER (2004): SO much is wrong in this film yet it is infinitely watchable. Colin Farrell does a good job as Alexander the Great though the Irish accent is ever present and I am not sure what that is all about. The narration is irritating more than anything else, Val Kilmer gives a huge cartoon performance as his father, and Angeline Jolie gives a strange performance as his mother (??). The scope is often magnificent and the battle sequences are breathtaking despite being confusing.

13. RENT (2005): The edgy Broadway play came to the screen lacking the edge, the fault of director Chris Columbus who just did not have the grit in his work to make the stage play work on screen. Using the original cast did not hlep either as nearly ten years had passed since the their time on stage and they had aged. Yet some of the songs are breathtaking, and the performances are fine, but it could have been so much better.

14. CHE (2008): This four hour film is a biography of Che Guevera portrayed by the great Benecio Del Toro in a film directed by Steven Soderbergh. In many ways it is a masterpiece but for whatever reasons the producers divided the film in half for release rather than trust what they have and they did not. I saw all four hours plus together at TIFF and felt there was a good film there with some editing. So good in so many ways yet something is lacking throughout.

15. EXODUS – GODS AND KINGS (2014): Massive epic about Moses and the release of the slaves from Egypt, a more realistic and less spectacular version of The Ten Commandments (1956). Christian Bale is a boring Moses, but the sets and art direction are sometimes breathtaking. The effects is where the film fails, as the parting of the Red Sea is like a toilet flushing and the miracles are….not.