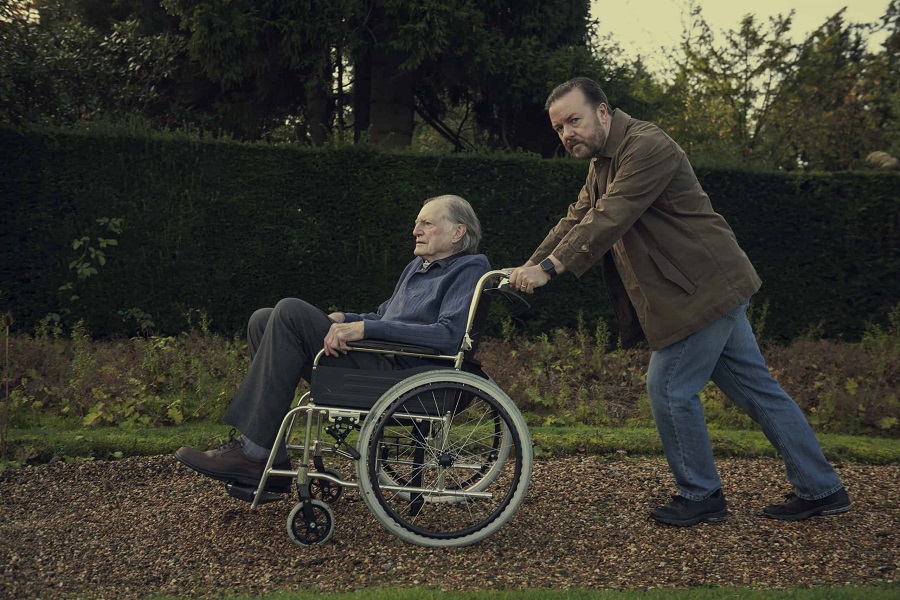 Presence has always been an essential thing for humans. Be it the music playing in the background while you work or the habit of keeping the TV on even if you are not watching it. Presence has never been of more value to us than in the times when a lot of us are stuck alone in some part of the world, unable to meet with the friends who live just around the corner. In its penultimate episode, the second season of ‘After Life’ focuses on this presence in Tony’s life, the one that he was habituated to even if he didn’t pay much attention to it.

It’s the revue night for The Tambury Players. After getting turned down from Matt, Kath comes up with a short notice date. Sandy is sad about not having a date. Tony invites Emma, but she has a shift that night. While talking to Anne, an idea pops up in Tony’s mind, and he tells her to attend the revue. One act after another, things take an unexpected turn, which leads to a lot of hilarious and embarrassing moments, especially for Matt, who brought his nine-year-old son to the show. Tony receives startling news.

Tony tells Sandy, who has been gloomier than usual recently, that he has grown so accustomed to his pain and grief that when things become hopeful even for a second, he gets confused. And then he does something that brings back the pain, and he feels more like himself. This trend of his had been portrayed in the previous episodes where every time a conversation would be going well; he would turn it around to Lisa and how he almost didn’t kill himself.

This habit of grief is what keeps Tony from allowing anything else to enter his life. But there are other presences as well, the ones that have kept him going all this while. There is Brandy, of course, his constant companion, the one who stopped him, again and again, from killing himself in the previous season. The next is his father, who has always been on the sidelines, just sitting there, sometimes not even saying anything. He did remember what Tony told him about Simon, which counts more than anything else.

Tony confessed that he visited his dad simply because he didn’t want not to visit and then feel bad about it, but then, every visit made him sadder, and he felt like he shouldn’t have visited in the first place. And yet, despite these conflicting feelings, he doesn’t miss a day. His father had been that comforting presence in the background, the one that he needed continuously but never paid more attention to, which is why the sudden absence of it makes things all the worse.

‘After Life’ has always focused on the value of the things that are in the present and how fickle they can be. Tony understood this after Lisa was gone, and from what happens in this episode, his story will go either of two ways. He might take this as a warning sign, and he might get out of wallowing, which he has got an addiction to. Or, it might push him over the edge, which would undo all the progress he has made in the past season, as well as this. It is the tipping point that will decide his future, and maybe even the future of the show.

In any case, this has been the funniest, as well as the saddest episode of the season. The revue turns out to be a blast, the one that you wouldn’t want to witness in person. Brian and stand-up? What did we expect! The final scene threatens to throw Tony into yet another spiral of grief. It shows, once again, how adept Gervais is at making you cry while also making you laugh your heart out. David Bradley might have had only a handful of dialogue in the entire series, but his absence is certainly not a welcome thought. This also makes us wonder, what’s next for Brandy? You might feel like hugging your dad and your dog after this one.