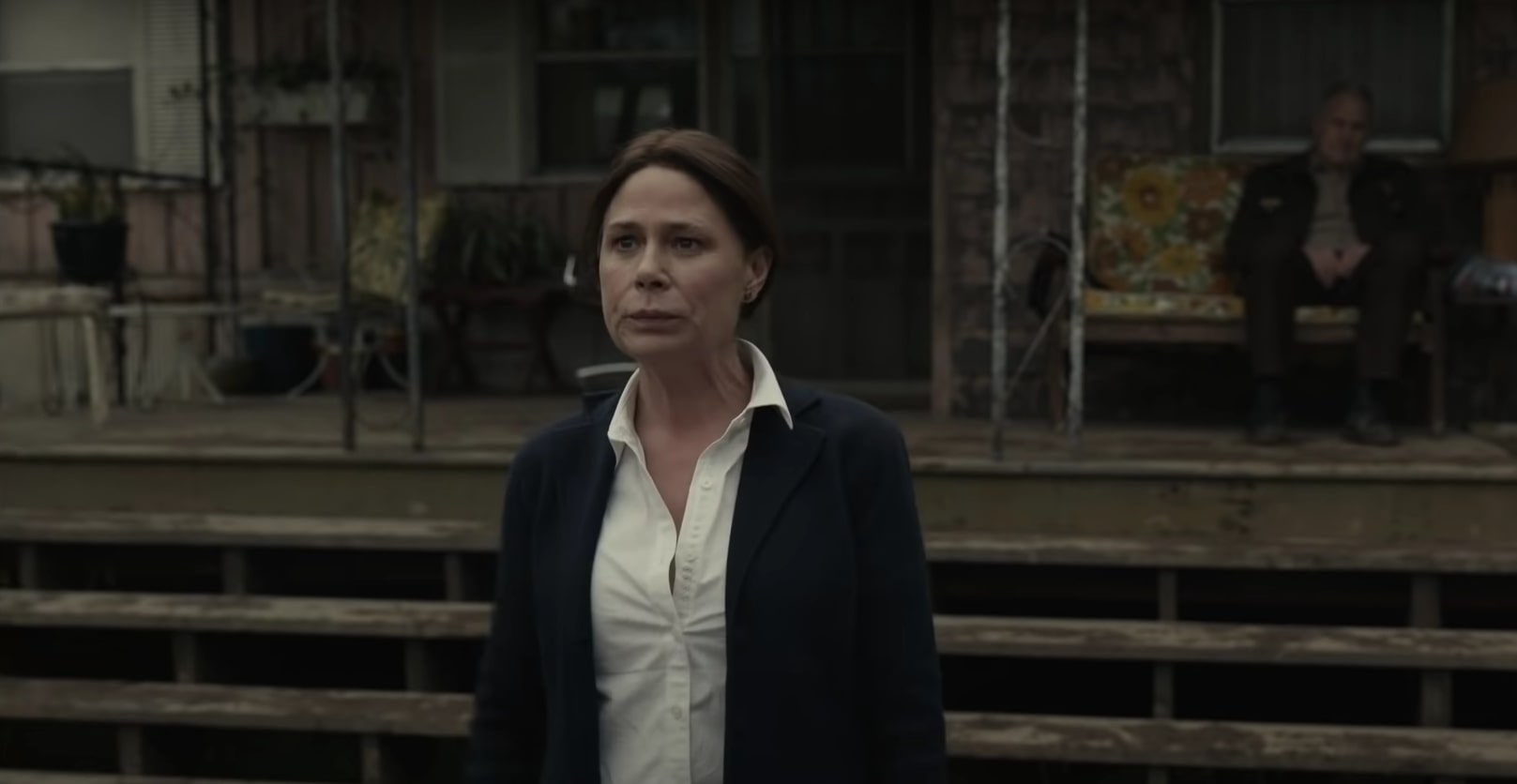 Based on the critically acclaimed 2009 namesake novel by Philipp Meyer, ‘American Rust’ is an impactful mystery drama series set against the backdrop of a dying Rust Belt town. In episode 5, titled ‘Jojo Ameri-Go,’ Harris (Jeff Daniels) virtually upends the town in his search for Bobby before he has to bring Billy (Alex Neustaedter) in.

Lee (Julia Mayorga) meets up with a lawyer in Pittsburgh for advice about Billy and Isaac (David Alvarez). Virgil (Mark Pellegrino) unsuccessfully tries to convince Billy to leave town and head for Canada. Isaac and Jojo part ways. In the final scenes of the episode, Harris gets a somewhat unexpected visitor at his home. Here is everything you need to know about the ending of ‘American Rust’ episode 5. SPOILERS AHEAD.

The episode begins as Harris and Steve raid a hotspot for addicts for information about Bobby. With less than 12 hours to go before he has to get Billy to the Sheriff’s office, Harris desperately tries to find any clue that can give an inclination about Bobby’s current location. Harris tells Steve that he can leave and there will be no hard feelings between them, but the latter decides to stay.

Meanwhile, Isaac and Jojo develop camaraderie as they travel together toward Vegas. However, Isaac finds out that Zoe doesn’t exist, and the phone that Jojo has been using to pretend to call her doesn’t even work. Unwilling to lose yet another friend, Isaac tells her about his feeling for Billy. However, it doesn’t stop Jojo from secretly leaving. Isaac then hangs a handkerchief from his pocket — just like how Jojo taught him — to attract a trucker so he can move forward in his road to California.

Lee lies to Alejandro (Federico Rodriguez) that she has to prolong her stay in Pennsylvania to take care of her father when, in reality, she visits a law firm in Pittsburgh to discuss what she should do. The lawyer she speaks to warns her that she will have to make a choice between Isaac and Billy and that choosing one will definitely condemn the other. When she returns home, Alejandro is there.

Grace (Maura Tierney), Bethany (Zenzi Williams), and their lawyer finally speak to Gelsey, the owner of Gelsey Dressmakers where Grace and the others work, and inform him that 51% of the employees are with them. In response, Gelsey threatens that he will either leave the town and set up the business somewhere else or shut it down completely.

Elsewhere, Virgil gives Billy the money they got from selling copper pipes and tells him to go to Canada and stay there until everything subsides in Buell. Billy refuses and tells his father that he doesn’t run away from his problems like the older man. An infuriated Virgil then leaves Billy stranded on the road. As he makes his way back to his home, he is found by Lee.

The last time the audience sees Bobby is in episode 3. He has shaved, and as he leaves for West Virginia, he makes a second anonymous call to the Sheriff’s office, implicating Billy in Novick’s murder. In episode 5, Harris and Steve find Karl, their regular informer, among the addicts they apprehend. They learn from him that Bobby is probably selling now at an abandoned Methodist church, but that turns out to be a dead end.

They finally get a break after a couple overdoses while taking cocaine near their son’s Little League Game. Fortunately, they both survive, and their blood reports reveal that the cocaine they took had fentanyl. With the husband, Tom, still unconscious, Harris speaks to the wife, Melanie, who tells him that Tom didn’t generally take her when he went to pick up the drugs before, but this time, they were heading toward their son’s club and Tom told her that the seller was a new person. Melanie got a glimpse of the seller, and it turns out to be Bobby.

Following the information Melanie provided, Harris and Steve raid an apartment complex, but as the audience knows, Bobby is long gone. They learn from the manager that he stayed there under the alias Bobby Jesus, which is quite ironic as most people who have seen him have compared his appearance to Jesus Christ while speaking to the police.

The problem is that Bobby got rid of his most recognizable feature — the flowing beard — making it near impossible for Harris and the others to track him down. When Harris arrests Billy and brings him in, he still has no idea where Bobby is. The episode reveals that Bobby is currently living with a woman in a remote cabin in the woods, where it will be almost impossible to find him.

When Harris returns to his home at the end of the day, he finds a man named Chuck waiting for him. For the last few days, Harris has been getting calls from Pittsburgh, which he kept ignoring. But it seems that his past is done waiting for him to reach out and has come calling. In episode 3, the audience learns why Harris left Pittsburgh and came to Buell. His colleagues warned him when they went hunting for a pedophile after the law had cleared that man and killed him.

As a result, Harris had an alibi to show he was not involved in the extrajudicial killing. However, he knew that this seemingly generous consideration of his colleagues wouldn’t come without a price. So, he left Buell before they could ask him for that. But it seems that it wasn’t enough. Chuck, one of his former colleagues, has shown up to collect on that debt after ten years.