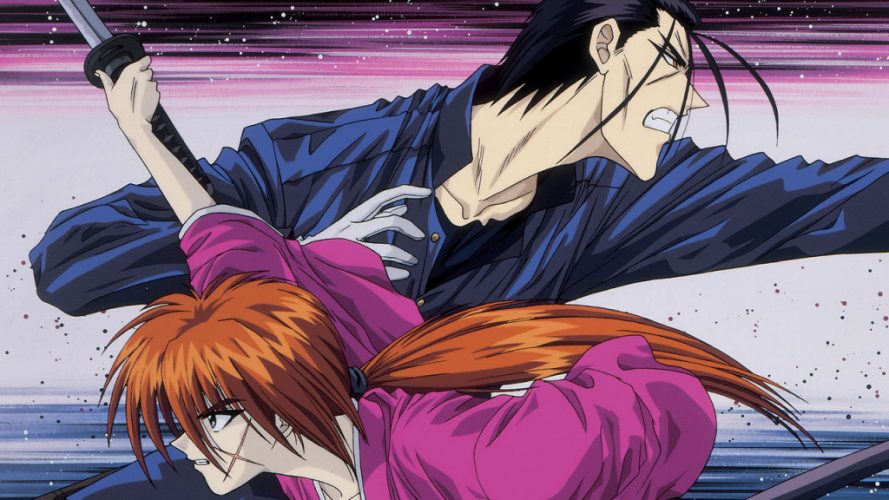 Rurouni Kenshin is an avid tale of love, guilt and realizations set in the Meiji era. The story follows the adventures of a highly skilled samurai working against the bakufu, a feudal military government, and how he manages to drive away the sins of his past. Having committed countless murders as an assassin in the name of the restoration, Kenshin Himura, formerly known as ‘Battosai, The Manslayer’; is haunted by visions of his past crimes. He is plagued with inner guilt that ultimately leads to him giving up on the ways of the blade in order to live a simple life helping people in need. He dismisses his own sword for a reverse blade sword that contains the blade on the opposite side, which is ill-fit for killing.

The story follows the reincarnation of Kenshin as a man of the people and his struggles to make peace with his past and win the love of his life, Kauro Kamiya. The anime is adapted from the massively popular manga series of the same name by Nobuhiro Watsuki and is widely regarded as one of the most loyal depictions of Meiji era Japan in an anime series. Rurouni Kenshin is a must watch for all anime-lovers who are into accurate historical accounts as the Meiji era in Japan is one of the most interesting periods in the history of the nation marked my public awakening, westernization and the industrial revolution. Today, we are looking at some of the anime that are a must watch for you if you loved the story of Kenshin Himura and his struggles with his past. 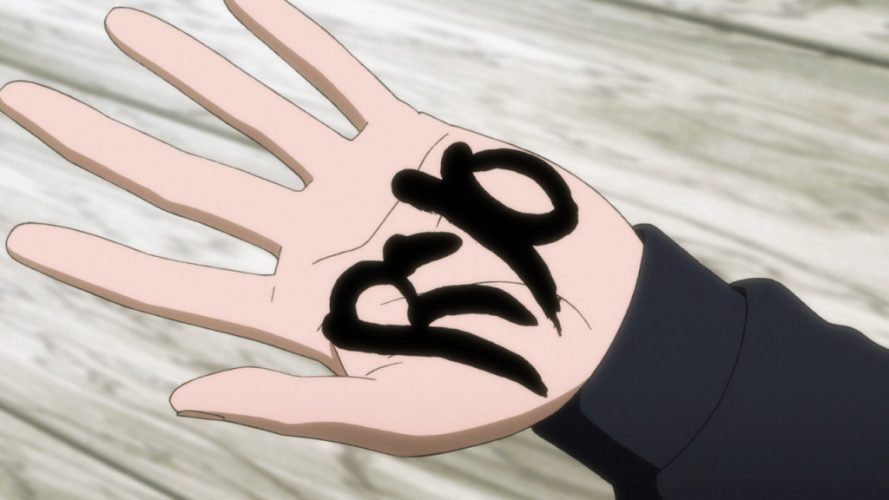 ‘Ryo’ is a Japanese short anime film directed by Koichi Chigara and released in the year 2013. The story follows the life of a small child who lost his parents in an English invasion and his subsequent struggle for vengeance. The child, a son of a samurai, grows up training and eventually joins Ryoma Sakamoto, a rebel with a plan. The anime, though lasting for only 26 minutes, manages to leave behind a certain sense of loss among its viewers. 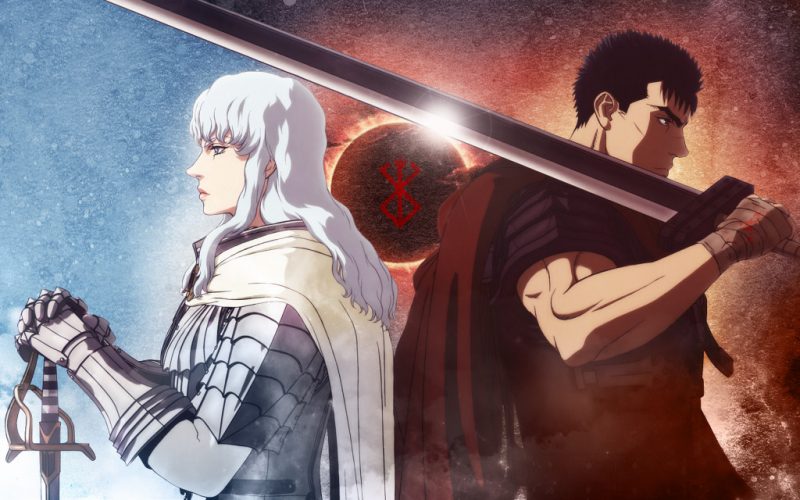 Dark atmosphere, crisp fight scenes and an intricate background score puts ‘Berserk’ high up on the list for those who love a darker shade in their palette. The series aired for a total of 25 episodes beginning on October 7th, 1997 and ending on March 31st, 1998. The story follows the adventures of Guts, a natural-born fighter, who leads a simple life until he meets Griffith, an ambitious leader of a tribe of warriors known as “The Band of Hawks”. Guts joins the group of mercenaries involuntarily after losing to Griffith in a duel and now he must travel with the group. However, he finds himself at a crossroad as he realizes that with every bloody victory, he pushes himself further and further towards his darker self. With some of the best visuals present in an anime of that era, Berserk makes full use of the 25 short episodes in questioning the choices of humans in times of distress.

‘Mukou Hadan’ also known as ‘Sword of the Stranger’ is an anime film directed by Masahiro Ando and released in the year 2007. The film has generated overwhelmingly positive reviews and has been ranked #1 in the “Top 10 Anime Films of the Decade” list by japancinema.net. The story revolves around an orphan named Kotarou and his loyal dog and companion Tobimaru, who escape from mysterious Chinese pursuers and are directed to Mangaku Temple where they cross the path with an unknown swordsman, Nanashi. Set in the Sengoku period, amidst brutality and mass murder, Mukou Hadan is a driving tale of love, compassion and friendship and the overall triumph of the latter over the former. 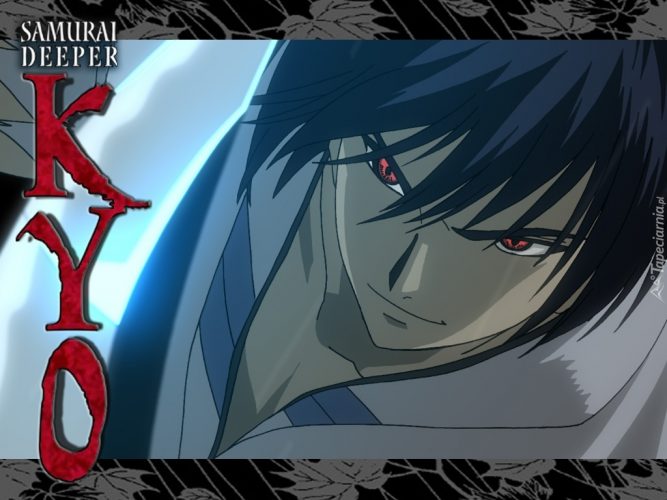 ‘Samurai Deeper Kyo’ follows the story of Demon Eyes Kyo, a samurai from the Edo era of Japan who is trapped inside the body of his rival Mibu Kyoshiro; and Shiiny Yuya, a bounty hunter. Kyoshiro is a peddler of medicine and after coming in contact with Shiina Yuya, the plot thickens. Developed by Studio Deen and aired in the year 2002, the anime ran for a total of 26 episodes. Similar to ‘Rurouni Kenshin’, Samurai Deeper Kyo has just the right blend of action, drama, suspense and comic relief. The fight scenes too are quite similar to that of ‘Samurai X’ but much darker. 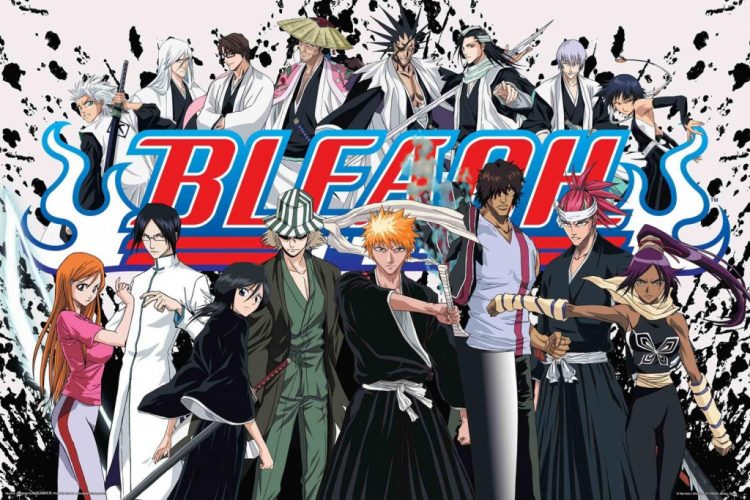 ‘Bleach’ is another popular anime that you are bound to love if you loved ‘Rurouni Kenshin’. The production value for this anime is out of the charts with some of the most notable names in the industry working on this one. The anime is a loose adaptation of the original manga series of the same name, having first aired in the year 2004 and ending in 2012 with a total of 366 episodes. The story follows Ichigo Kurosaki, a high school student from the town of Karakura, who obtains the power of the Soul Reaper as a substitute from Rukia, another Soul Reaper after she falls in battle. Upon accepting his new duty, he slowly finds out the hidden truth behind his seemingly normal friends and as he delves deeper into his new life, he painstakingly uncovers the truth that has been hiding in plain sight all along. He seeks assistance from the Vizards, exiled and trapped souls in the void, in order to defeat Aizen, a fallen Soul Reaper who experiments on other reapers and is also the reason behind Rukia’s downfall. The story will manage to draw you in right away; just make sure you have some time in your hands before you start binge-watching this one! 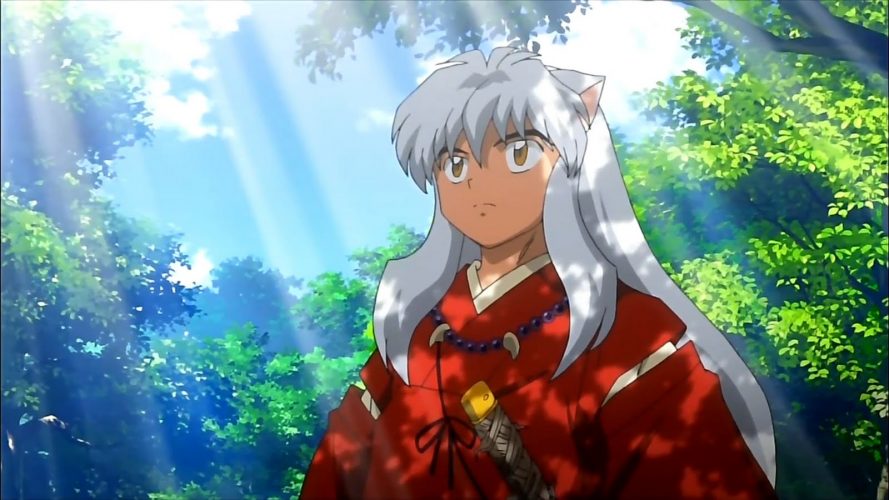 ‘Inuyasha’ is an award-winning anime developed by Sunrise based on the manga series of the same name. It is one of the most popular animes of all time having been aired several times across all continents. The story follows the adventures of Kagome Higurashi, a teenager from Tokyo who is mysteriously thrown back in time to the Sengoku period after having fallen into a well while saving her cat. Upon arrival into the strange land, she finds herself in possession of an arcane jewel of tremendous power which she shatters in an attempt to save it from a demon. Destiny catches up to her as she frees Inuyasha, a dog-demon, who eventually agrees to travel with her across Japan in an attempt to reunite the fragmented pieces of the Shikon jewel. 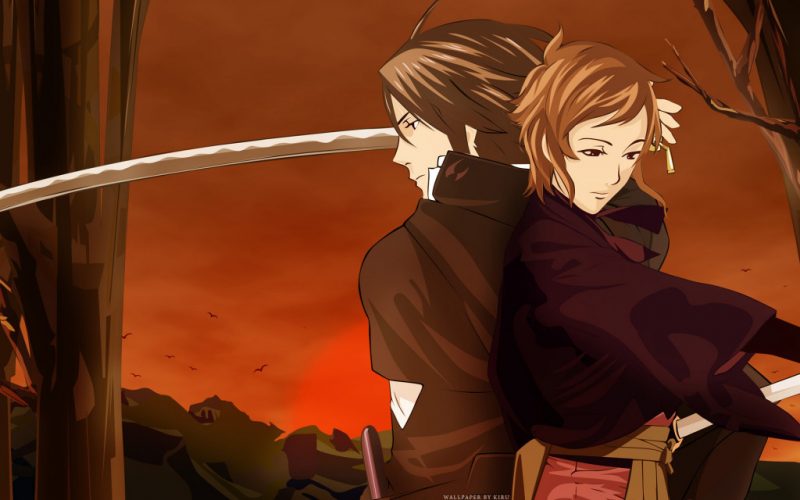 Also known as ‘Intrigue in the Bakumatsu – Irohanihoheto’, this anime revolves around the life of Yojiro Akizuki, a mercenary who joins a travelling theatre to avenge their leader’s murder while pursuing his own demons. Equipped with the legendary blade Getsuruito (tears of the moon), the young protagonist gets involved in a plot to control the country and finds himself in the midst of a power struggle. Also set in the Bakumatsu, the period of a power struggle in Japan where Kenshin Himura struggled against the oppressive government, this anime shares glaring similarities with Rurouni Kenshin but in a supernatural setting.

‘Samurai Champloo’ is an anime directed by the legendary Shinichiro Watanabe of the ‘Cowboy Bebop’ fame and aired in Japan on Fuji TV in the year 2004. The story revolves around a girl named Fuu and her eternal quest to find the samurai ‘who smells like sunflowers’. Set in an alternate Edo-era, the anime reflects the radical direction style of Watanabe introducing crossovers between western themed music and progressive character designs. Gradually unfolding in a series of episodes, this anime is a pure work of art and is a must watch for all shonen lovers out there. 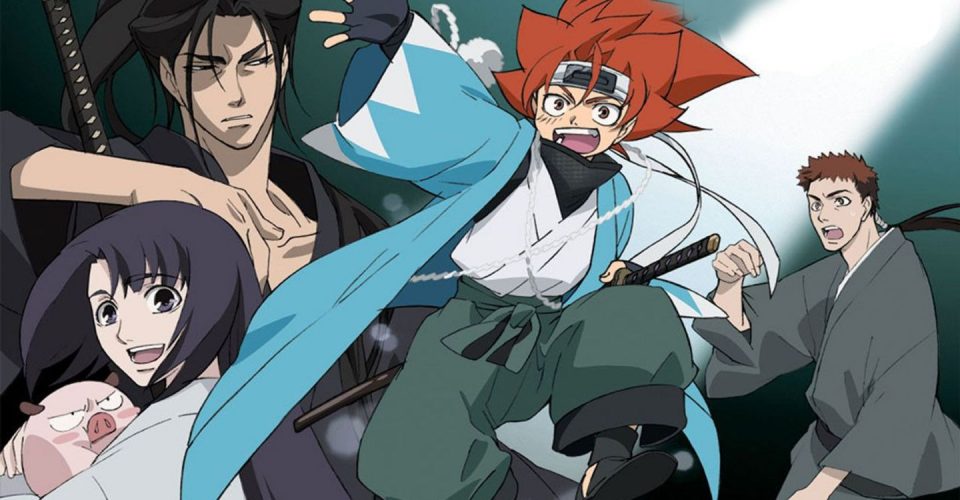 If you’re familiar with the setting of ‘Rurouni Kenshin’, then this anime shouldn’t come as a surprise to you. ‘Peacemaker Kurogane’ is set in the pre-Meiji restoration era when the country was in utter political and social turmoil. The plot follows the story of Tetsunosuke Ichimura also known as Tatsu, a fifteen-year-old orphan living with his brother and working for the Shinsengumi as an accountant in an attempt to avenge his parent’s murder. However, close contact with the Shinsengumi reveals more than what he bargained for and now he must constantly fight with his own self for righteous order. This one is bound to keep you at the edge of your seat.

‘Basilisk’ is a popular manga series written and illustrated by Masaki Segawa and published in the year 2003. The story is based on the novel, ‘The Kouga Ninja Scrolls’ by Futaro Yamada and follows the clash between two ninja clans, Iga of Tsubagakure and Kouga of Manjidani in an attempt to become the next Shogun. The eternal feud between the two clans threatens to destroy the peace and prosperity of the clans and hence a ceasefire is reached as both the clans are conscripted into the service to the state. However, as succession to the throne is jeopardized, the pact between the two clans is broken and ten fighters are chosen from each clan to battle it out to their death.  The clan that manages to slay the ten fighters from the opposite faction will be given a favor from the government for the next thousand years. This anime manages to captivate its viewers through interesting plot twists and choices that challenge the very fabrics of human emotions.

‘Samurai 7’ is the anime adaptation of the massively popular Japanese film ‘Seven Samurai’ directed by Akira Kurosawa in the year 1954. The story revolves around a village called Kanna in a futuristic setting ravaged by war and frequented by bandits. The villagers after several attempts to save the village conclude that they require samurai or skilled fighters to fend off the invasions. However, the village is left extremely poor after the war and needs to find fighters willing to fight in exchange for rice. Samurai 7 portrays human suffering and loss along with strict codes of conduct in the brink of death that will make you question your own actions. 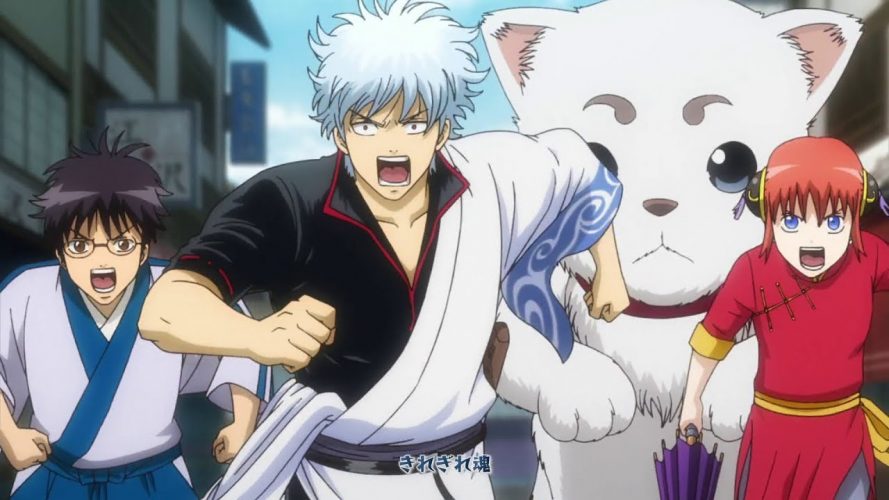 Gintama is one of the most popular Japanese manga series of all time written by Hideaki Sorachi and published in the magazine ‘Weekly Shonen Jump’ in the year 2003 with over 55 million copies in circulation today. The manga was later adapted into an anime in the year 2006 by TV Tokyo simply called ‘Gintama’. The plot follows the life of Gintoki Sataka, a samurai and a freelancer, working closely with his friends Shimura and Kagura in order to make ends meet. However, the city is invaded by aliens known as amanto and the shogun government, realizing the power of the aliens decides to make a pact where the amanto are allowed to enter the city and the people of the state are not allowed to carry swords, their very symbol of freedom. The government is reduced to a puppet, and it’s up to the heroics of Gintoki Sataka and his comrades to save the future of their state from the invasion.