‘Bastard!! -Heavy Metal, Dark Fantasy-‘ or ‘Bastard!! Ankoku no Hakaishin’ is an original net animation or ONA from Netflix. It is based on the Japanese manga series of the same name written and illustrated by Kazushi Hagiwara. Like its source material, it is predominantly a dark fantasy action-adventure anime with a ladle full of ecchi added to it. The series is highly meta, with the characters being aware they are in a Shounen anime. The story revolves around Dark Schneider, the most powerful wizard in the world. Fifteen years earlier, he was defeated and subsequently sealed inside the body of his reincarnation, Lucien Renlen. Now, with his former underlings having begun a conquest across the lands in order to unleash an ancient entity, the humans free Dark Schneider as a last desperate measure. Here is everything you need to know about the ending of ‘Bastard!! -Heavy Metal, Dark Fantasy-‘ season 1. SPOILERS AHEAD.

As the title and the names of the characters, groups, and locations suggest, Hagiwara used heavy metal as a source of inspiration. The series begins in the modern world when humanity is at the height of its technological prowess. However, human progress coms to a jarring halt when an entity known as the Darkness appears and begins to annihilate the cities. Suddenly, a column of light bursts out of the ground, and another entity appears. This one looks like a dragon. The Darkness and the dragon fight, destroying most of the world. Millions of people die. Eventually, the dragon emerges victorious, and it traps the Darkness deep underneath the ground with four seals.

The story then skips 400 years and restarts with the Dark Rebel Army’s invasion of the Kingdom of Meta-llicana. It’s one of the locations where a seal the dragon placed on the Darkness is located. Another location, the Kingdom of Judas, has already fallen, and the seal there has been broken.

The Dark Rebel Army, comprising demi-humans and monsters, is headed by the four Heavenly Kings — Gara, Arshes Nei, Abigail, and Kall-Su. They were all disciples of Dark Schneider 15 years ago during the Golem War. After Prince Lars of Meta-llicana defeated Dark Schneider, they decided to attempt to free the Darkness, who is now known as Anthrasax, the greatest demon god of all. Lars was believed to have died. In reality, he was transformed into a baby dragon, who has since attached himself to Gara, though the latter has no idea who he is.

After Dark Schneider’s defeat, the Head Priest Geo Noto Soto sealed his spirit in Lucien’s body. However, he realized that there might come a time in the future when they would need Dark Schneider. So, he told his daughter, Tia Noto Yoko, how to temporarily deactivate the seal — the kiss of a virgin maiden. In the present time, Meta-llicana is attacked by the Dark Rebel Army while the Head Priest, King, and Knights are absent from the kingdom. Desperate to protect her home, Yoko kisses her childhood companion, and Dark Schneider emerges from his magical prison for the first time in 15 years.

He easily defeats the brigade that the Dark Rebel Army has sent and its leader, Osborn. He then reveals that he hasn’t given up on his original plans of conquering the world. However, Yoko seems to have significant control over him due to her connection with Lucien. Although Lucien is about the same age as Yoko, he appears physically, emotionally, and mentally younger than her. Yoko also discovers that she can transform Dark Schneider back into Lucien by kissing him again.

Although Dark Schneider has little interest in defending Meta-llicana, he becomes the kingdom’s largely indifferent protector. He and Lucien are ultimately two sides of the same coin. And that’s why he feels almost duty-bound to protect Yoko. When the four Heavenly Kings realize that their former leader has returned and sided with the enemy, they try to make sense of it. Gara kidnaps Yoko to draw Dark Schneider to his stronghold. However, he is ultimately defeated and changes sides. Thunder Empress Arshes Nei then tasks her three Sorcerer Generals — Sean Ari, Kai Harn, Di-amon — to defeat Dark Schneider. However, he seduces the first two and places the third under the Accused spell, which makes Di-amon follow all of Dark Schneider’s orders. If he ever decides to rebel, he will be turned into a toad.

In the season finale, titled ‘Wavering,’ Dark Schneider faces Arshes Nei. She is a half-human, half-dark elf. Dark Schneider raised her and later became her lover. They were together for a hundred years. However, she grew to resent him because he created a harem for himself. While Dark Schneider was gone for 15 years, the Thunder Empress has only grown more powerful and is probably now as strong as Dark Schneider himself.

Dark Schneider is a master of fire magic, while Arshes controls lightning. After the defeats and subsequent defection of three Sorcerer Generals, Abigail voices his skepticism about Arshes’ willingness to defeat their former leader, pointing out her history with Dark Schneider. To prove that she is no longer Dark Schneider’s adoptive daughter, Arshes allows the Dark Priest Abigail to put the Accused spell on her. It gives Abigail control over Arshes. If she fails in her fight with Dark Schneider or joins him, the color of her nail will change from blue to purple to red, and she will be transformed into a toad.

No, Arshes will not die, nor will she be turned into a toad. In the final moments of their battle, they both cast Helloween, the ultimate spell of destruction. However, Dark Schneider is proven to be more powerful, and his spell slowly begins to overpower Arshes’. Lucien then appears before him and lets him know the truth. Dark Schneider realizes that Arshes is under Abigail’s Accused spell and redirects his Helloween spell.

Is Dark Schneider or Lucien Dead? What Is the Meaning of the End-Credits Scene? 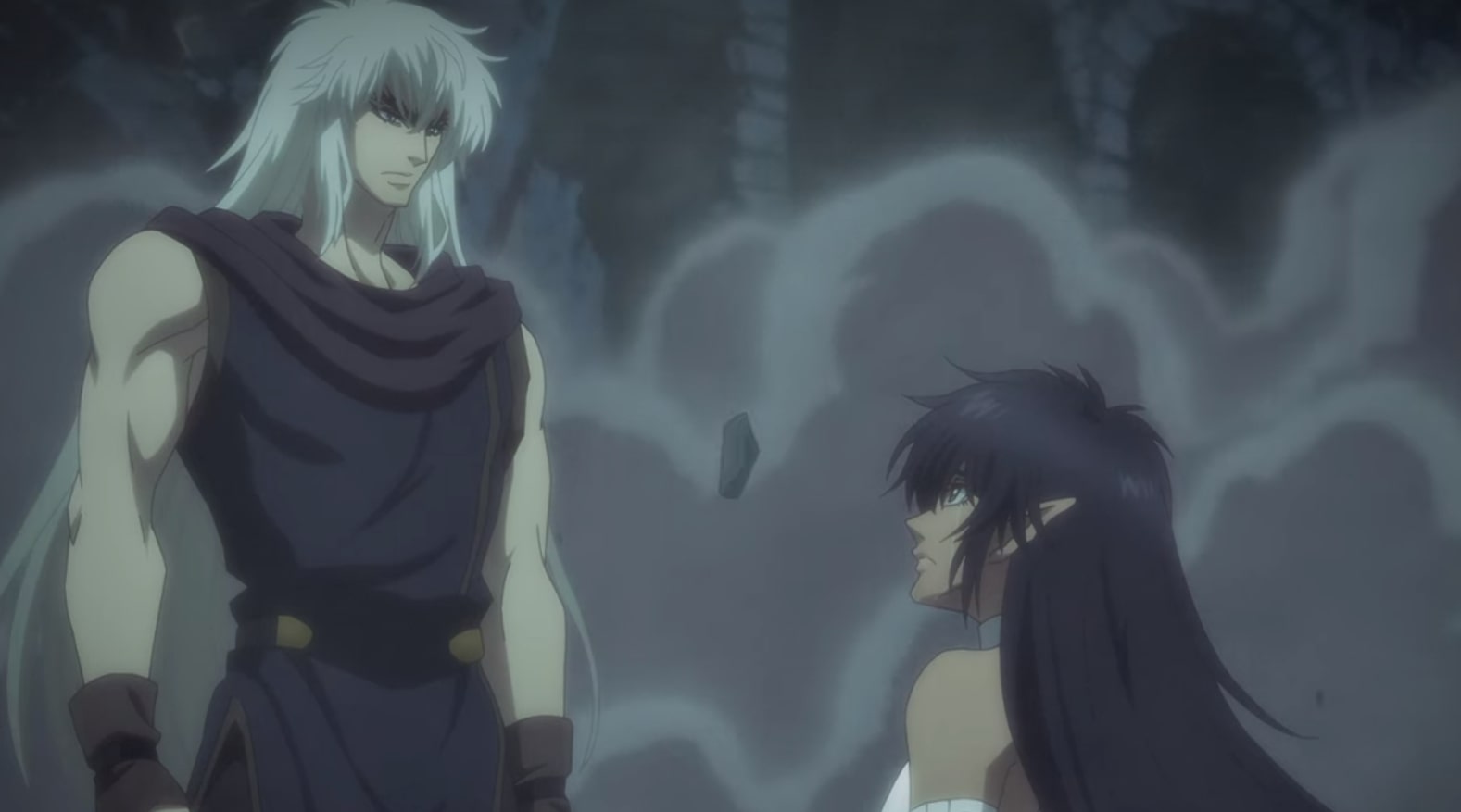 The fact that Arshes will not die becomes clearer in the end-credits scene when Dark Schneider sacrifices himself to save his adoptive daughter. He can also use the Accused spell, so he knows that in order to save Arshes, he needs to rip out his heart. And that’s what he exactly does, fulfilling the vision of the prophet of the royal family. Dark Schneider is indeed dead. This was the only way he could protect Arshes. But then, this is a world where magic exists. So, death is not as permanent as it is in the ordinary world. In the originally manga series, he resurrects himself. Free of Abigail’s Accused spell, Arshes rejoins Dark Schneider, becoming the second Heavenly King to do so after Gara. She and Dark Schneider then destroy the oncoming battalions of the Dark Rebel Army.

Who or What Is Anthrasax? 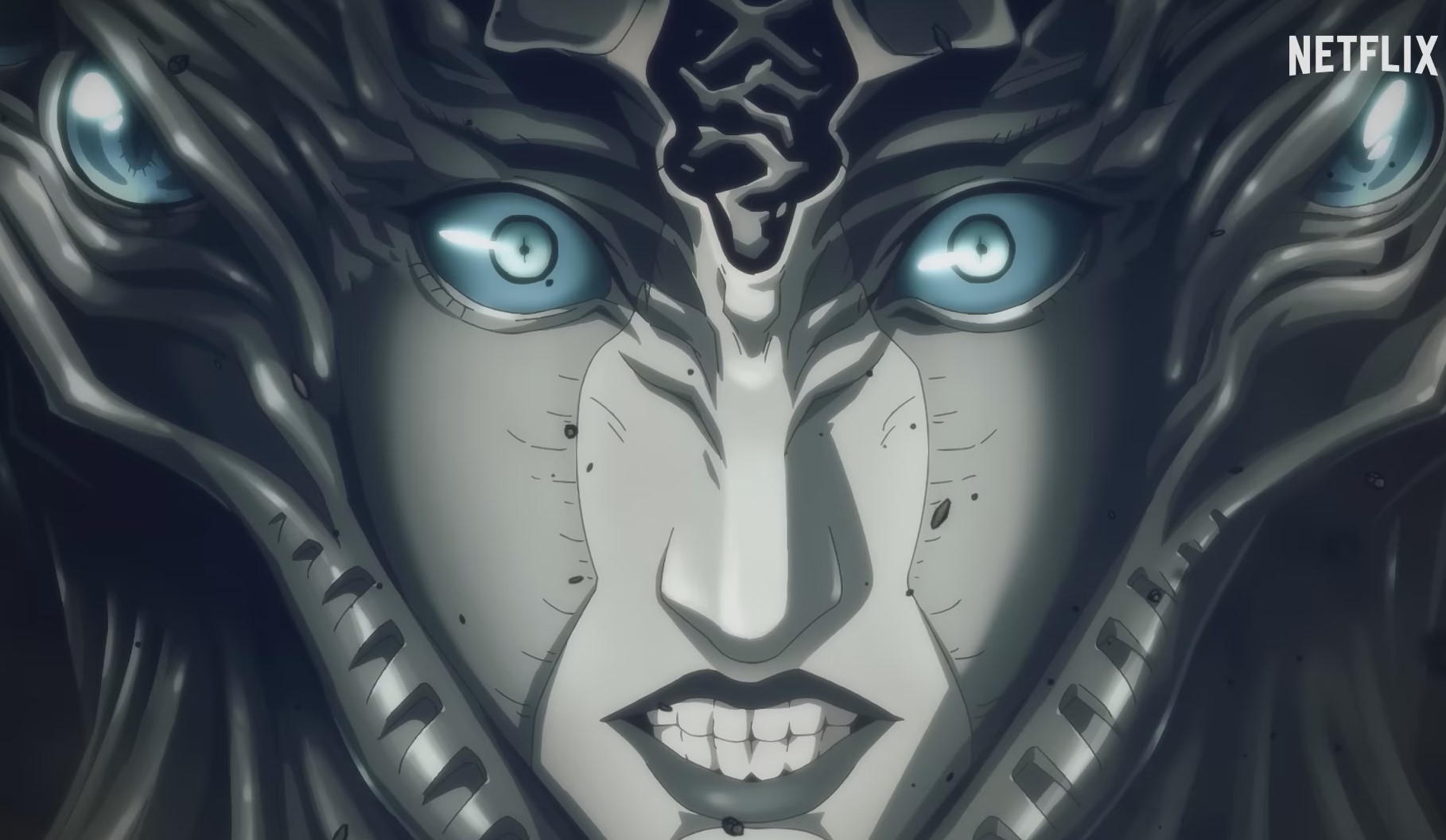 The Heavenly Kings believe that resurrecting Anthrasax will usher in utopia on Earth. In 400 years since the entity was defeated by the dragon, humanity clearly has forgotten what it is. Contrary to popular beliefs, Anthrasax wasn’t created by magic but by science. 400 years earlier, modern humans made it to stop all wars. Instead, it brought humanity to the brink of extinction. In the manga series, it is revealed that the entity is possessed by an angel. A group of scientists in the modern age created the dragon, which is actually the Dragon Knight armor. It is implied that they also made Dark Schneider to use the armor to defeat Anthrasax.