Laura Dern is a celebrated veteran of the industry. Having been active for more than four decades in the industry, Dern’s long litany of accomplished work is just a testament to he skills as an artist and personality as a star. A recipient of four Golden Globes, Dern started her career in the 1973 film ‘White Lighting’ in a minor role. She gained attention for her stunning portrayal of Connie Wyatt, a restless and sexually inexperienced 15-year old, in the movie ‘Smooth Talk’. She shows no signs of stopping and is set to make a return in her award-winning capacity role in the second season of ‘Big Little Lies‘. Here is the list of top Laura Dern movies and TV shows. Happy reading! 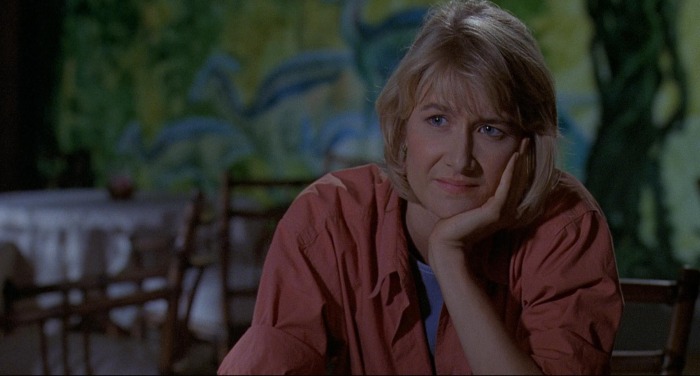 Steven Spielberg invented the term “summer blockbusters”. ‘Jurassic Park’ is just another addition to the list and Spielberg’s personal filmography of avant-garde cinema. The story revolves around a wildlife park that houses an extinct species. Man’s endeavors to create and control nature get out of hand as the species escape the cages and live a natural life as they’re supposed to. Right from the robotic dinosaurs, to the innovative storyline, Spielberg gets everything right and provides humanity with an iconic film of the greatest proportions.

Ramin Bahrani’s ‘Chop Shop’ was a cinematic masterpiece and probably stands as one of the best of this century. While the film deals with the miasma of poverty and small happiness in life, his subsequent works have taken a pleasant discourse towards exploring the lives of modern American suburbs. Dennis, a construction worker, gets evicted from his house. Rick, the man behind the eviction, sees his personality and gumption and decides to offer him a spot on the team, helping him evict other people. ’99 Homes’ feels like Bahrani’s most complete work yet, succeeding as a soulful story and managing to yet again deliver stand out performances. Shannon and Garfield are exceptional in their portrayals, remaining captivating and cutting forlorn figures throughout the film.

How often is the case that a humane, beautifully written piece gets converted into a melodramatic tirade about glorifying its stars? Often. ‘The Fault In Our Stars’ falls in the category. A terminally ill Hazel is prompted to attend therapy sessions by her parents. In the course of it all, she meets Augustus, a charming, funny boy, who smokes cigarettes without lighting them. They eventually fall for each other and go on a dream trip together, but fate has different plans for them. The film has its moments; the chemistry of the leads is contagious and perhaps is the only thing that keeps it going. Despite beautiful performances and a pretty decent soundtrack, ‘The Fault in Our Stars’ pales in comparison to its material source and crumbles under the pressure to keep the good work up.

There have been numerous films which have tried to capture the idiosyncratic reverie of the American suburbs. While ‘American Beauty’ is the first name that pops up, ‘Smooth Talk’ gives the former a run for its money. Even though it is haplessly incomplete as compared to the Sam Mendes masterpiece, ‘Smooth Talk’ has a lot to offer, primarily in the form of a typical Laura Dern performance as Connie. The sexually charged character is the lynchpin the story depends on and she certainly doesn’t disappoint. Alexander Payne is a leader in contemporary American filmmakers. His intelligent and nimble cinema about the understanding of life and its ironical vagaries is deeply affecting and wholly impressive. ‘Citizen Ruth’, while not his most mature or immersive work, stands out with its raw, emotional prowess. Ruth Stoops’ complicated life is an expression of defiance and extreme indifference to life in general. Payne populates his narrative with a Bohemian-style coolness and rugged characters who will always be remembered for one reason or the other.

Kelly Reichardt is a talented and experimental filmmaker, famous for her musings on life and women power dynamics in the indie world. Flagged as a master storyteller and keen observer, Reichardt’s style of cinema tends to detach the audience emotionally with the story and engages them on a more metaphysical level with the characters. ‘Certain Women’ revolves around the lives of four interconnected women, each dealing differently with the strife in their lives. The raw, emotional power of the character finds their voice through Reichardt’s gentle and observant direction and makes themselves heard through the resounding performances of the actors.