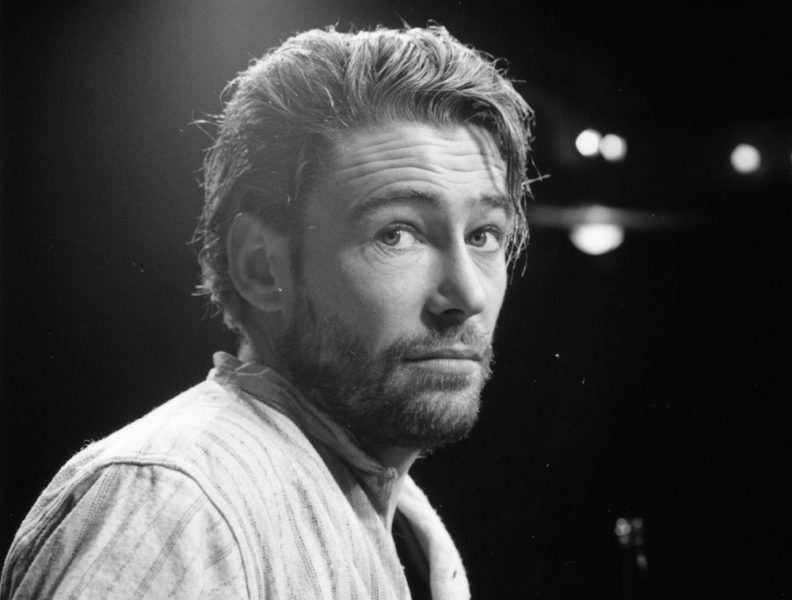 During the explosion of New British Cinema of the sixties, neo-realistic, gritty, blue collar stories that told real stories new actors emerged that would within a few years dominate the film industry with their performances. Of those to go on to bright careers was the great Peter O’Toole, blessed with piercing blue eyes and a magnificently expressive voice, O’Toole burst into stardom with a triumphant performance in the title role of Lawrence of Arabia (1962).

Like most British actors, his roots were firmly planted on the stage where he was much acclaimed as Hamlet in the sixties. But it was Cinema he truly loved and where he found his greatest fame.Forty four years span his first and last Oscar nomination and he was never awarded a Best Actor, despite seven nominations. In 2002 he was awarded a Lifetime Achievement Oscar, basking in the adoration of the Academy, and then was in the running again four years later.

So great was his talent he was one of very few of the ill used British greats to escape the near pornographic Caligula (1980) without terrible reviews. As the doomed, utterly mad and perverse Emperor Tiberius, he was foreboding and frightening. The characters he created are legendary, remarkable men all, though flawed in some way, often tragic because of those flaws.

His greatest performance was his first, an astounding piece of acting that is one of the most famous performances of all time. What followed was a career in which he constantly impressed and surprised his audiences and critics, there was never a dull moment. His career spanned fifty years before he passed, but is forever immortal on film. Always. Here is the list of his top 10 movies. You can watch several of these best Peter O’Toole movies on Netflix, Hulu or Amazon Prime.

Portraying one of the most extraordinary men to ever walk the earth, O’Toole is majestic, haunting, regal, frightening and deeply vulnerable. Banished to the deserts of Arabia because the British military does not know what to do with him, he proves to be a military genius, banding together the warring tribes into a powerful army to go to war with the Turks. Given bright white robes to wear, he often looks like a God in the middle of the oceans of desert. Yet Lawrence was a troubled man, a homosexual when it was not fashionable to be such, a sadist who loved killing, and a masochist who loved pain. This all made for a curious mix for such a man so revered by the empire. David Lean beautifully merges the intimacy of the story with his epic scope, but at the centre is O’Toole delivering his greatest performance and one of the finest put on film.

As Eli Cross, a potentially dangerous film director more than willing to kill anyone who interferes with the creation of his masterpiece, a World War One epic. He never seems to touch the earth in the film, even walking it seems he is floating. Our first moments with him we hear his voice, he takes a bite of an apple and tosses it out of the chopper and chaos ensues. Like a sorcerer overseeing the lives of everyone on his set, there are no secrets he is not already aware of, he is like God, all controlling. At one point he says “If God could do the things we can do, he’d be a happy man.” Cross is dangerous, manipulative, brilliant, dark, funny and all knowing. A stunning performance from a gifted actor knowing he has one of the roles of a lifetime.

Together with the great Katherine Hepburn, the two actors cause the film to leap off the screen. As Henry II, O’Toole is wonderful, battling it out with his imprisoned wife Eleanor (Hepburn). The film crackles with great dialogue, which is on turn brought to fiery life by the two greats, obviously having the time of their lives working with each other. Hepburn won an Oscar, how did O’Toole not? One performance does not exist without the other! Watch his face in his scenes with her, though he has imprisoned her there is no one he admires, respects and fears more than her. “I hope we never die” he roars, and film being forever makes that so. Two great actors elevate the other with a great script!

When told there is an audience for the TV show he is appearing on, when told it is live, he has a meltdown, a complete physical meltdown. “I’m not an actor” he roars in terror, “I’m a movie star!” As Alan Swan, a great Hollywood star in the vein of Errol Flynn, an adventurer, Swan is asked to do a guest shot on a popular comedy show in the fifties in the early days of television. The hard drinking, over sexed actor is passed to a young writer to babysit and the young man, who adores Swan, has his hands full. Like so many people around him, Swan is enabled until cut down to size and embarrassed by people he has come to care about. Like everyone else who encounters him, we too fall in love with him.

This marked the actors first outing as Henry II, a carousing, hard drinking monarch who was content to use his position for sex and drink, letting his minions run the court. His friendship and relationship with Thomas Becket, portrayed by Richard Burton is the subject of the film, and watching two great actors feed off one another is tremendously entertaining. O’Toole captures the fun loving, often irresponsible Henry to perfection, carrying it on to greater heights in A Lion in Winter (1968) just four years later. Both he and Burton were nominated for Best Actor for their splendid performances in the film.

This demanding film features perhaps the boldest, most demanding performance of his career, portraying a once famous actor now in his eighties, reduced to playing dying old men on daytime drama and doing commercials, the actor is a miracle. The daring comes in the narrative, as the former Lothario falls in lust with a chippy young teenager, the niece of a friend who comes to stay after getting in trouble at home. Dubbing her avenues, he tries to seduce her, pays her to see her naked or take a bath, anything to remind him of what it was to touch young flesh. The film had its. Rita she, believing it crossed a line, but the girl was nearly twenty, hardly an argument for pedophilia. O’Toole was deeply moving, melancholy as the old man who knows he has little time left and just wishes to be alive.

When he inherits his fathers estate and wealth, the schizophrenic son, beautifully portrayed by O’Toole takes to dancing and singing in the place, and roaming outside believing he is Jesus Christ. When family members contest the will, and fail, they decide to cure him, but the results are a living hell. There is a purity in O’Tools’s work here that is extraordinary, as though we were seeing his gifts for the first time. And is he truly mad? Or just seeing the world a little differently than the rest of us?

In this musical remake of the classic film, O’Toole is outstanding as a young teacher disliked by his students for being dull. When he is married something within is opened up and he becomes an exciting teacher, but his wife’s past impacts his advancement. He does not care. When she is killed in the war, he is devastated, but dedicates his life to teaching as she would have wanted and becomes beloved by his students for the rest of his life. The actor has a lovely chemistry with pop singer Petula Clark, and they bring to the screen. Lovely and at times deeply emotional.

In a bold piece of casting O’Toole was cast as the actor/writer Cervantes, who when imprisoned for his work acts out with the other prisoners the tale of Don Quixote and Sancho, his loyal squire. One of the greatest musicals to grace the Broadeay stage, Richard Kilroy was the original and hard to forget Quixote, but as O’Toole applies his make up and becomes Quixote we accept him, he wins us over. His singing is dubbed but his acting is glorious bringing to vivid life the mad old knight fighting windmills for Honor. It is not the singing that matters, just watch his face if you think lip synching cannot be art.

Voicing Anton the venerable food critic who discovers a rat is the finest cook in Paris, the actor brought a delightful sense of wonder to his voice work. He brings something very special to Anton, who eventually sets aside his snobbery, as all critics should do and accepts that this magnificent work comes from an unlikely source. His last line, “surprise me!” and that beautiful look on his face is tear inducing.