10 Best Episodes of The Office

The Office’ (US version) is my favorite sit-com of all time. It is also arguably the funniest. Set in the Scranton branch of paper making company Dunder Mifflin, the show centers around the daily interactions of the branch’s outlandish bunch. The manager, Michael Scott, is their boss and tries to impress the others and make them like him.

The show went on for nine seasons, 2005-13, and won five Emmys in total, including Oustanding Comedy Series n 2006. The show is a remake of the British television show of the same name which didn’t run for long. Here’s a list of the top 10 The Office episodes. And if you are wondering what’s the best season of The Office? Well, we will leave that up to you to decide. 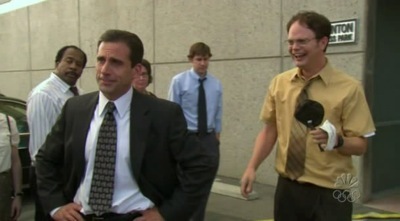 One of the primary reasons why this particular episode finds its way into the list is because of Dwight’s catchy song, “Ryan Started the Fire!”. Probably the best episode of the season, ‘The Fire’ started off with the temp Ryan’s job examination by Michael when fire played spoil-sport. The people in the office gather outside and majority indulge in games, while Michael and Ryan peel off to discuss business school, joined uninvited by Dwight. In the end, Dwight finds out the reason for the fire: Ryan, and makes a song out of it, much to Michael’s delight and his own as well. The e[isode is important in terms of setting up the relationship between many characters; Michael’s weird crush on Ryan, Pam and Jim’s feelings for each other, and Dwight’s patronization of Michael.

‘Murder’ features on the list owing to the light-hearted and emotional tone of the writing. there are rumors of Dunder Mifflin’s insolvency, which spurs the office into a meltdown. Michael, in an attempt to calm the furor created by the news, starts a game of Murder and tries to play off the issue. While most cooperate, others chose to be conservative. The actors got to try a Southern accent, and it has to be said that many did extremely well.

A mysterious rebate in the company’s account prompts an inquiry to Jan in corporate. The funds are due to a government programme which accommodates reformed criminals into a normal work environment. When it is discovered that the recruited ex-convict is Martin Nash, a black employee, Michael is determined to protect him. But when Martin scandalously proclaims the jail to be a better place then Dunder Mifflin, Michael loses it and seeks the help of Prison Mike, who then recounts his tale of being tortured by dementors in the prison. The show’s intelligent and humorous take on racist profiling and other racial epithets and stereotypes, which occur regularly on the show, dominate the episode. Prison Mike has now become an iconic character and another reason why the convict is one of ‘The Office’s best episodes.

Toby and Michael’s relationship has been well-documented since the first episode. The former’s presence often spoiled the latter’s ecstatic and often offensive plans. So when Toby decided to venture off to Costa Rico and leave the job, Michael’s happiness knew no bounds. ‘Goodbye Toby’ features not a single minute that doesn’t entertain. Everything is just perfect. The song at the end by Michael, his gift to Toby, and the grandness of the occasion all point towards just one thing: brilliance!

Michael’s Mr. Handel story, Dwight’s “Don’t be an idiot” are probably the highlight of the season and the show overall. Michael is invited by Ryan to be a guest speaker at his Emerging Business class at school. Meanwhile, Dwight fights a mighty bat who disrupts the daily proceedings at the office. The character of Michael Scott couldn’t have been played better by anyone else. The last scene where Michael is the only one to show up at Pam’s art exhibition, despite the whole office knowing, shows his affection towards his employees, whom he considers family, and his love of his job. He makes selling paper sound special and it is just so heart-warming. A beautiful show about the beautiful bond that people share.