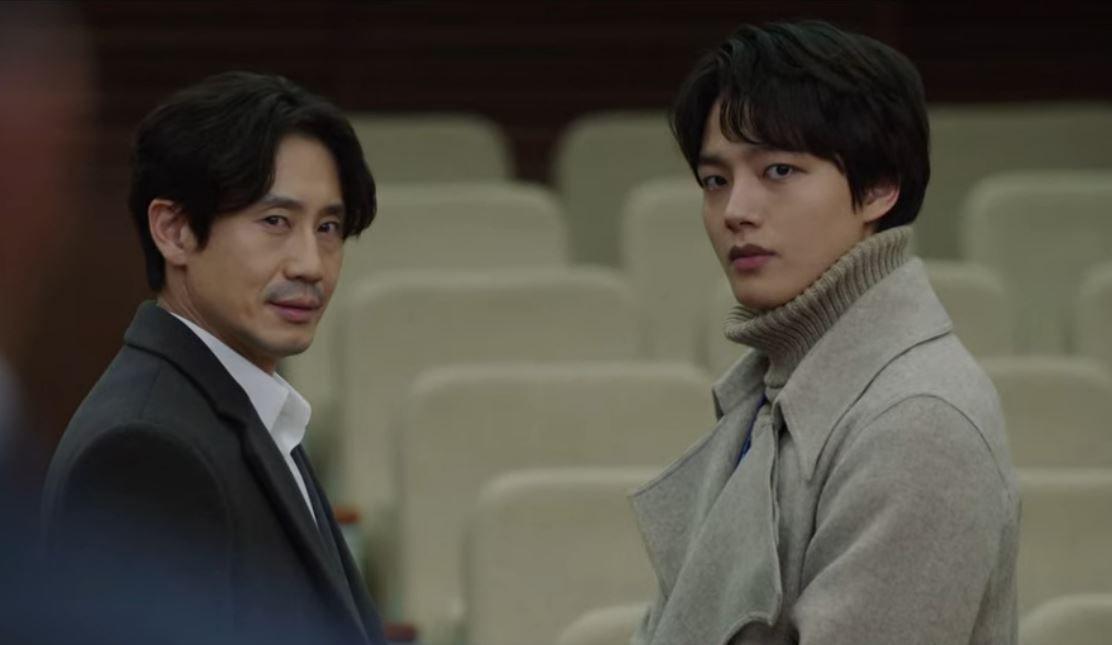 In Netflix’s Korean drama ‘Beyond Evil,’ two detectives form an unlikely team to hunt down a serial killer who seems to have started killing after a break of 20 years. Lee Dong-sik (Shin Ha-Kyun) and Han Joo-won (Yeo Jin-gu), the reluctant partners, have their own reasons to be so very involved with the case. Director Shim Na-yeon puts forward a story with deceptive twists and questionable character motivations, with the people involved having something to gain or lose with every move that is made.

As the show progresses, the story becomes much more than just about a serial killer on the loose. The protagonists realize that there is more going on in the sleepy town of Manyang than what was initially known. Shim does a stellar job of uncovering each supporting character’s story, providing the viewer with a multilayered drama filled with suspense. The final episode ends on a high note, with all the story threads coming together to form a satisfying finale. So, here’s everything you need to know about it. SPOILERS AHEAD.

Lee Dong-sik is an assistant police inspector at the Manyang substation. But before he was an officer of the law, Dong-sik’s life was forever changed 20 years ago when his twin sister went missing. Lee Yu-yeon went out one evening but never came back. Her severed fingertips were discovered by her mother outside their house later. During the same time, the dead body of another woman, Bang Ju-seon, was also discovered in a local field. Her fingertips were missing too. Dong-sik was considered a suspect in both the cases back then but was cleared based on an alibi from a friend of his, Park Jung-je. 20 years later, Yu-yeon’s body still hasn’t been found, and Dong-sik is still tormented by that event.

Han Joo-won is a young and promising policeman whose father is a high-ranking officer. Han worked on a sting operation where he uncovered a string of dead bodies of female undocumented immigrants. The women were killed the same way Ju-seon was killed. Han takes a transfer to Manyang in order to closely investigate Dong-sik as a suspect. The two of them are partnered up by the station chief and, by the end of the first episode, find the decomposed remains of a woman buried in a local field, providing an impetus to the serial killer investigation.

Not too long after that, Kang Min-jung, a young local girl and someone who is close to Dong-sik, disappears. The next day, Dong-sik discovers her severed fingertips outside her home, seemingly confirming the killer is on the prowl again. Amidst Joo-won’s suspicions regarding Dong-sik and an investigation into the missing person, Dong-sik figures out that Min-jung was kidnapped and killed by her own father, the meek and gentle Kang Jin-mook.

He finds Min-jung’s severed fingertips in the basement of the house she and her father share. The realization that Jin-mook is the serial killer dawns on Dong-sik. He vows to bring him to justice and find out what happened to his sister, even if it means breaking the law to get there. As part of his plan, he decides to place the fingertips outside Min-jung’s house. Jin-mook is arrested and interrogated. As the case draws to a close, there’s another twist in the tale.

Jin-mook kills himself in the jail cell, and it is clear that someone helped him do it. Before he dies, Jin-mook leaves a bloody message on the wall for Dong-sik, saying he was not the one who killed Yu-yeon. Dong-sik and Joo-won begin an investigation into what really happened to Yu-yeon the night she went missing and who helped Jin-mook kill himself while in prison. This investigation results in more people related to the case mysteriously dying.

The duo learns that various other members of the community that included Joo-won’s father, Han Ki-Hwan, Jung-je’s mother, Do Hae-won, and a real estate developer by the name of Lee Chang-jin, were involved in some way with Yu-yeon’s death. They all had been part of a cover-up because they had something to lose if the actual cause of her death came to light.

It is revealed that Yu-yeon died in an accident caused by Joo-won’s father, who was driving drunk that night. Dong-sik and Joo-won hold their cards close to the chest while working towards bringing the people responsible to their day of reckoning. Their ploys pay off, with each of them being arrested and sent to jail for their part in the cover-up.

In the end, the investigation is a successful one. For two people who were hesitant about being partnered up, doubting each other, and harboring secrets of their own, Dong-sik and Joo-won worked brilliantly as a team to crack the case. Throughout the course of the show, we see their bond evolve. Dong-sik and Joo-won chose to trust each other to do their part in order to garner confessions out of the people involved in the cover-up. Once the final arrest of Joo-won’s father is made, Dong-sik asks Joo-won to arrest him for his part in moving Min-jung’s fingertips instead of reporting it.

In an emotional moment for the both of them, Joo-won reluctantly cuffs Dong-sik’s hand, signifying a moment of promises kept between the two. Dong-sik is sentenced to one year in prison and two years probation for what he did. The duo meets again in 2022 after Dong-sik is out of prison and Joo-won is now with Women and Juvenile Affairs in a different province. By the end of it all, there seems to be mutual respect between them, a stronger bond after being through all of what happened. The show ends with them smiling, facing each other, much akin to the end of the first episode. Only this time, their smiles mean something else entirely — respect and, possibly, contentment.

What Did Jung Chul-moon Try to Tell Joo-won Before He Died?

Jung Chul-moon was the station chief at Munju police station, a neighboring town that was equally involved with the investigation. Chul-moon was also involved in the cover-up that happened 20 years ago by falsifying a forensic report for Hae-won. He had been accepting bribes from her ever since. Chul-moon also had incriminating surveillance footage against Chang-jin, since he was the one who aided Jin-mook’s death on the orders of Han Ki-Hwan.

Chang-jin kills Chul-moon in order to cover his and Ki-Hwan’s tracks. They hoped to frame Dong-sik for it, but Joo-won gets there first, finding Chul-moon in his bathtub, barely alive. As Joo-won rushes to help him, Chul-moon holds Joo-won and pulls him closer as if to say something, but dies before he could. It’s fair to assume that he might have given up the name of his killer since he knew it was Chang-jin. This would have made the investigation easy, but ultimately, the people involved had justice meted out to them regardless.

Jung-je, one of Dong-sik’s closest friends, is sentenced to 3 years in prison for abetting the concealment of Yu-yeon’s body. On the night Yu-yeon’s disappearance, a drunk Jung-je had run over Yu-yeon’s body. One might wonder what Jung-je would do after getting out of prison and whether the friends he grew up with for 20 years would forgive him for his actions. While Jung-je did run her over, he spent the next twenty years conflicted by a weak memory of what happened that night, thereby questioning whether he really did run Yu-yeon over or not.

Jung-je was clearly repentant of his actions, especially when it came to Dong-sik. Throughout the show, the running theme for Dong-sik was that he forgave but did not forget. Despite their friendship of 20 years, it’s possible that what happened would be difficult for Dong-sik to accept and put behind. While the show ends on a happy note, with the culprits behind bars and a sense of closure for Dong-sik, it might not be the case for Jung-je.

Read More: Is Beyond Evil Based on a True Story?