Where to Stream Bird Box? 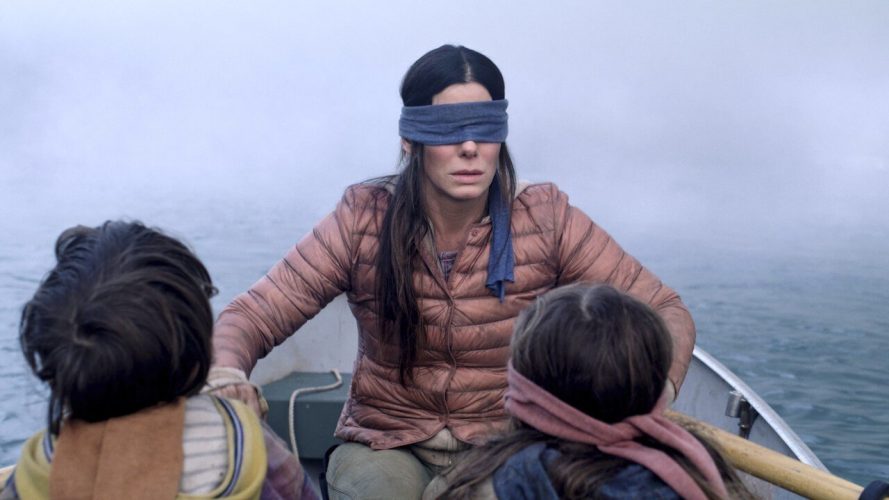 Horror has always been a popular genre, and recently we are seeing a spike in its popularity once again, as various films are coming out, attempting to integrate a variety of issues into the genre. While some are hit and miss, ‘Bird Box’ has been a decided hit. It shows a post-apocalyptic world of horror and captures the despair in the situation quite accurately. The movie is based on Josh Malerman’s 2014 novel of the same name. The film garnered praise for the atmosphere of fear it created and for some stunning performances. However, the true benchmark for its popularity has to be the extremely dangerous ‘Bird Box’ challenge that it led to – which was basically an internet phenomenon where people blindfolded themselves and attempted to carry out their everyday activities. While we strongly suggest that our readers do not do anything of that sort, we would recommend that you watch ‘Bird Box’ if you have not seen it already. But before telling you where to see it, let us explain the story of ‘Bird Box’.

What is Bird Box About?

‘Bird Box’ begins by showing us a post-apocalyptic world where Malorie Hayes (Sandra Bullock) tells two young and unnamed children that they are going to be rowing down a stream, and under no circumstances are they to remove their blindfolds, unless they want to die. Hereon, the film jumps between two timelines, the present attempt to sail down the river, and the events which took place five years back, leading to this situation. We see what happened five years back when Malorie was pregnant and her sister Jessica (Sarah Paulson) comes to visit. There are news reports going around about mass suicides originating in Russia and spreading across Europe. Malorie’s routine checkup at the hospital soon turns into something crazy as she sees a woman commit suicide on her way back, and realizes that the problem has spread to North America as well.

The town is soon thrown into chaos, but Malorie and Jessica attempt to drive away from it. They see the entity causing this problem and get into an accident. Jessica soon kills herself. Malorie, attempting to flee on foot, is offered shelter by a woman named Lydia, though her husband Douglas (John Malkovich) disagrees. However, Lydia is soon overcome by this entity and kills herself. Tom (Trevante Rhodes), a passerby, finally rescues Malorie and she reaches the house in safety. There, Charlie seems to have an idea of what is happening and theorizes that demonic forces have invaded the earth, and upon seeing them, they take the form of the victim’s worst fears and drives them insane, to the point of committing suicide.

Tom tries to protect the people in the house by covering all windows and urging everyone not to venture outside without blindfolds. A fellow shelter seeker, Greg, volunteers to review security footage to point out the cause and takes the precaution of tying himself to a chair, but he too is overwhelmed and commits suicide. With their food and other supplies running low, they must replenish their reserves, especially since another pregnant woman, Olympia, joins them. They go to the supermarket where Malorie finds pet birds and brings them along. This is where they meet an infected person, who is being used by the entities to infect others. Charlie bravely sacrifices himself for the sake of the group.

A newcomer named Gary throws a wrench into the works when it turns out that he could be under the control of these entities too. Most of the people in the group are eliminated due to Gary’s schemes, but Malorie and Olympia manage to give birth before Olympia commits suicide. Tom manages to eliminate Gary, neutralizing the threat temporarily.

The plot then moves ahead by five years, as we see Tom, Malorie and the unnamed kids attempt to find a safe community of humans living in the forest. While they are headed there, they run into an ambush by some infected people. Tom bravely distracts them and even manages to kill all of them before killing himself. Malorie and the kids brave the rapids and other infected survivors as they carry on down the river. They take the birds with them, realizing that they should warn them if the entity is near. The danger is not over yet, as an entity tries to convince the children to take off their blindfolds, using Malorie’s voice, but the woman saves the kids. Finally, they head to the safe community, which was formerly a school for blind people. She lets the birds escape and join the other birds at the school, and names her and Olympia’s child as Tom and Olympia.

Will ‘Bird Box’ carry on its story, as the fight against these entities rage on? We cannot be sure, but we can definitely tell you where to watch the movie.

Is Bird Box on Netflix?

Netflix has an amazing collection of films and television shows which makes it a premier content provider. Horror is no exception to this rule and ‘Bird Box’ is available on the platform. Check it out here.

Is Bird Box on Hulu?

Unfortunately ‘Bird Box’ is not available for Hulu subscribers. However, the platform is very careful when it comes to curating content, and ensures that it has something for everyone and maintains a standard. Thus, you might not have monsters that hunt by sight, but you do have a post-apocalyptic movie where the monsters hunt by sound. Check out ‘A Quiet Place‘.

Is Bird Box on Amazon Prime?

Amazon Prime has a wonderful library that cannot be bested easily. While Netflix does have the edge over Prime in the case of ‘Bird Box’, the platform has a wonderful collection of horror movies that you can enjoy, which ranges from classics like ‘Nosferatu‘ to recent wonders like ‘Hereditary‘.

Where Can I Stream Bird Box Online?

Unfortunately, there is no way to stream ‘Bird Box’ elsewhere apart from Netflix. You need to have a Netflix account to be able to watch the movie.

Where Can I Watch Bird Box Online For Free?

How could we forget about the freeloaders? With so many horror movies coming out, you might want to watch them before making a financial commitment. Well, we have got you covered. Head over to Netflix and use their free trial period to watch the movie. Since it lasts for 30 days, you should be done watching the movie comfortably. However, we would urge all our viewers to pay for any art that they consume.