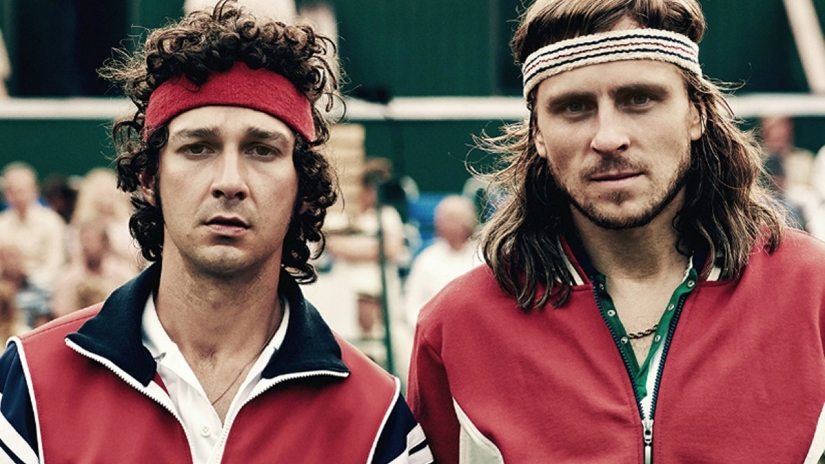 There is no question that Shia LaBouef is a wackadoodle; unpredictable, notable, a first class ass. Yet it cannot be denied he is also an actor of mercurial talent, as gifted as he is troubled. His performances in demanding films such as Nymphomaniac (2014) and last years American Honey (2016) more than display a raw bravery and intensity in his work, a danger lurking just under the surface. Forget his work in the insipid, stupid Transformers franchise, most of all, forget his leather jacketed, faux Brando, ass in Indiana Jones and the Kingdom of the Crystal Skull (2008), give him credit for his good work when it happens.

John McEnroe, in many ways was the LaBouef on the late seventies, early eighties sports world. The hot-tempered New Yorker would shout and curse as the father umpires, taunt the crowd, his opponent, he was brash, cocky, confident, and perhaps the finest tennis player to come out of the United States. His antics on the courts earned him headlines around the globe, as well as suspension after suspension, but never shut him up. If he disagreed with a call he attached the umpire with obscenities, shouting at them for the whole crowd to hear.

As McEnroe, LaBouef is electrifying. He might have been born to play this role. The film traces the inevitable showdown between the fast rising McEnroe and the current tennis God, Bjorn Borg (Sverrir Gundason) a quiet, intense player with a fierce dedication to winning. Having already won Wimbledon four times, the wealthy Borg has nothing left to prove, but like all great athletes he sees McEnroe coming in his rear view mirror and wants to play him to beat him.

Through flashbacks we see that their background is not so different, though Borg has been tormented by anxiety his entire life. On the court he is all business, calm, cold, with a devastating serve and return, a champion celebrated the world over.

McEnroe is the player people love to hate but his talents cannot be denied. He is astounding on the court, merciless, has an equally vicious serve, and is able to find his opponent’s weakness very quickly. On a crash course with each other when they finally meet on the Wimbledon court in 1980, it is a showdown of the best in the world.

Gundason brings the intensity of Borg to vivid life, showing he was not the ice man portrayed in the media, but a deep feeling man tortured by his mind. As good as he is, and he is very good, the film belongs to LaBouef, who sinks under the skin of McEnroe to deliver the finest performance of his career. Explosive on the court, and it seems, off of it, it is a simply stunning performance.

Overall, ‘Borg McEnroe’ is a fine film about two of the giants of the tennis world.