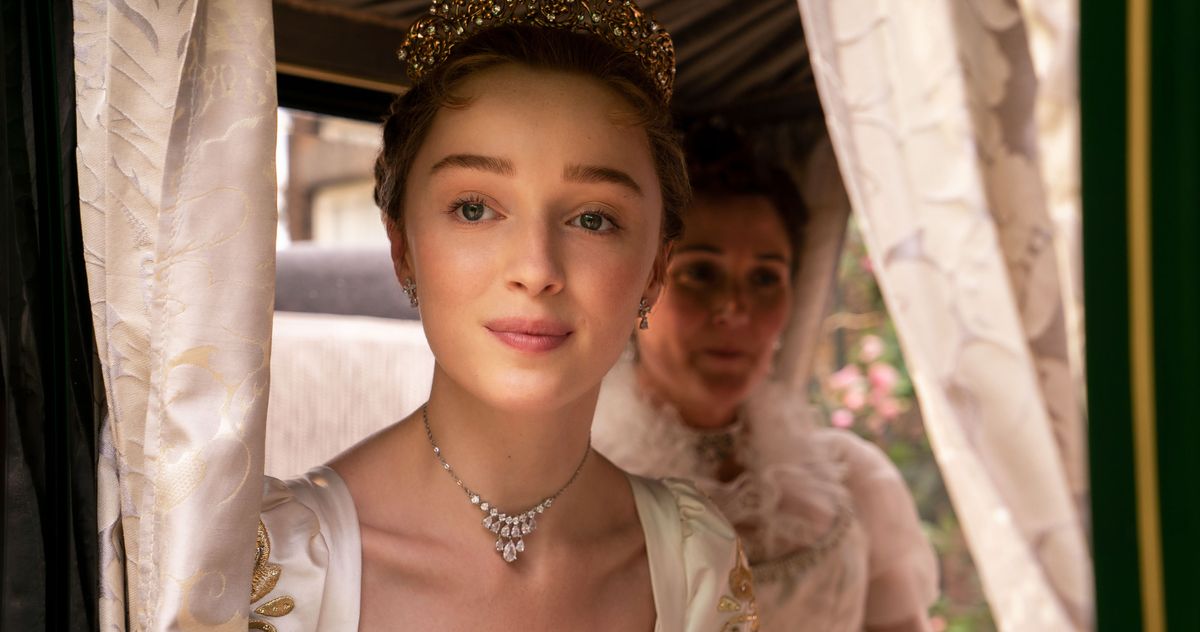 Shonda Rhimes’ Netflix series, ‘Bridgerton’, is a historical romance drama that follows the charmed lives of Regency England’s aristocratic families and their various romantic pursuits. At the center of the story are the Bridgerton siblings, headed by old-school noble Lord Anthony, the Viscount Bridgerton. Being an over-protective and woefully misguided big brother, Anthony challenges his best friend Simon, the Duke of Hastings, to a duel to the death after he catches the Duke kissing his sister Daphne at a ball.

Reaching the conclusion that a duel is stupid (not to mention illegal), Daphne races against time to stop the duel from taking place and manages to do so by convincing Simon to marry her. Curious to find out how it fared for Simon and Daphne in the fifth episode of ‘Bridgerton?’ Well, here’s a recap and review of ‘Bridgerton’ season 1 episode 5. SPOILERS AHEAD.

The news of Daphne and Simon’s engagement is broken by Lady Whistledown, the resident Gossip Girl, and the ton’s one and only source into the scandalous lives of London’s elite. Prince Friedrich, who had all but proposed to Daphne, apologizes for misreading the signs, wishes her well, and decides to go back to Prussia. Meanwhile, at the Bridgerton House, a flurry of wedding prep is underway as it is to be a shotgun wedding. But Simon and Daphne’s special marriage license request is denied by the Archbishop, throwing a wrench in the on-going preparations.

Lady Danbury suggests that the couple appeal to the Queen – who is clearly miffed that Daphne chose Simon over her nephew – and convince her of their love. Moved by Simon’s sincere-sounding declaration of love, the Queen gives them her blessing and grants them the special license for an immediate wedding. To escape being wedded off to just anyone, Marina comes up with a plan to seduce Colin. She knows that Colin is an honorable gentleman and will do the right thing and marry her if he believes he has compromised her reputation.

Penelope, who is privy to the underhanded plan, is dismayed at the thought of Colin getting tricked into proposing. She appeals to Marina’s better side and tells her that Colin is a good man who does not deserve to be trapped in a marriage that’s built on lies. At this point, Marina is only looking out for herself and the welfare of her unborn child, so Penelope’s appeals are completely ignored.

Daphne and her Duke get married in an intimate ceremony. As their lavish wedding reception comes to an end, the Dowager Viscountess Bridgerton finds a private moment and gives Daphne “the Talk”. Or rather a botched version of “the Talk,” embarrassment clinging to every word she utters. Daphne leaves London with the Duke, feeling rather confused about “the marital act,” the dynamics of which her mother could not explain.

Let’s start off by acknowledging that Prince Friedrich of Prussia is a gem of a man – gentle, kind, good-natured, respectful, and humble. When he comes to clear the air with Daphne and apologizes for having misread the signs, you almost want to scream at Daphne to dump His Grace and get with His Highness. Friedrich seems to be a better man than all of the other men on the show, with the possible exception of sweet Benedict. Simon is too conflicted and brooding, Colin is too gullible and naive, and let’s not even talk about Anthony.

But our girl Daphne very politely stomps on the nice Prince’s heart. Oh well, the heart wants what it wants. We can only hope that the Prussian Prince comes back in future seasons of the show and finds a partner worth his while. Circling back to Colin’s naïveté, Marina’s plan of seducing Colin is downright nefarious. I mean, we get that she has to do whatever it takes to keep her baby safe, but trapping an unsuspecting man is low. Poor Penelope’s broken heart notwithstanding, we hope Colin can see through Marina’s deception in the future episodes.

So far, the show has managed to engage the viewers emotionally, and by episode 5, we’re all pretty much invested in the fates of all the main players. The earlier episodes also do a great job at making us care about these lords and ladies of London’s beau monde. This episode also brings us back to Daphne’s profound lack of knowledge of anything sexual in nature. She has been kept so sheltered that she is utterly in the dark about the “marital act” (as her mother terms it) and has to depend on her husband to show her what exactly it entails.

Daphne’s ignorance of sex does make one wonder – why was it considered inappropriate for women to know (or talk) about sex? What we witness in this show is a result of years and years of conditioning – propagation of the idea that sex is somehow a bad thing. But the taboo on sexual topics was placed long back, originally to prevent women from knowing about it, thus curbing their natural urges and desires. Maybe the only reason Simon is adept at lovemaking and takes care of Daphne’s pleasure is that the show’s target audience is predominantly women.