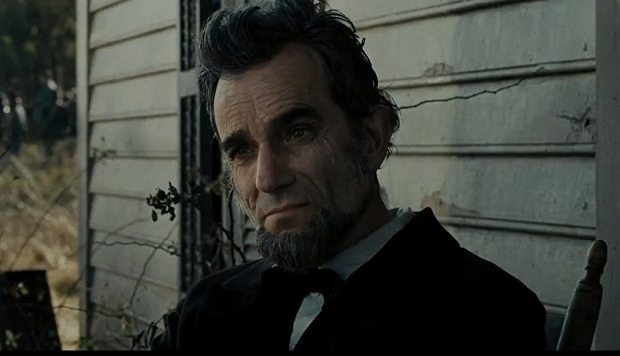 The Civil War was a bloody war fought not only for attaining freedom but also to abolish an arcane law whose existence was a disgrace to the society. The election of Abraham Lincoln as the president of the United States was a significant step in the history of American democracy. It was also the trigger which started the Civil War between Union army, i.e. those who were in favour of abolishing slavery and the Southern Confederates who were against Abraham Lincoln and his policies. Following is the list of top movies ever based on the civil war; a war that had made the line between good and evil blurry. You can watch several of these best civil war movies on Netflix, Hulu or Amazon Prime. 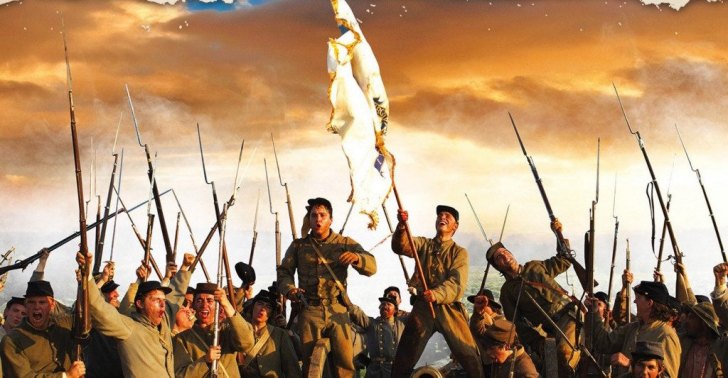 Sheltered from the brutal and bloody civil war in the military Institute of Virginia, a group of teenage cadets don’t know yet what war tastes like. However, when they are called upon to defend the Shenandoah Valley in the battle of New Market, they are faced with a deadly choice. Fighting on the Confederate side and protecting the valley from annexation by the Union forces, the young teenagers will realise what it means to fight a war and how it destructs everything you hold dear. A semi-bildungsroman this movie is one of the best known Civil War films. 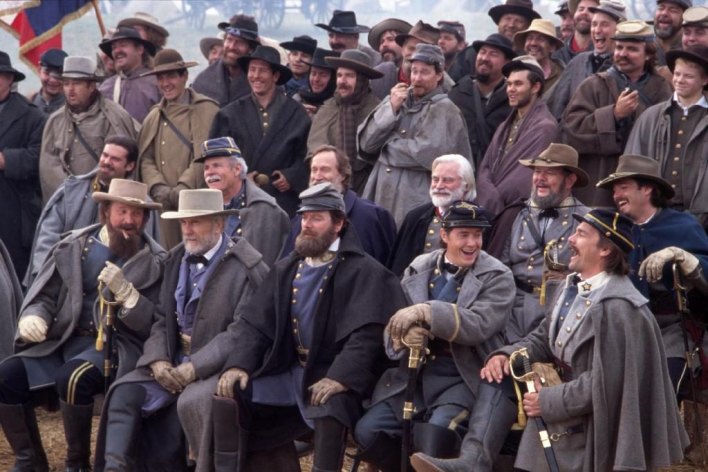 Based on the best-selling historical novel by Jeff Shaara, “Gods and Generals” this movie is a prequel to the famous Civil War movie Gettysburg. It begins from the secession of the southern states into the Confederate army and continues all the way up to the Battle of Gettysburg covering three significant battles that happened in between. Told from the point of view of the famous Confederate general Stonewall Jackson, the movie just like the novel pays an emphatic nod to the Confederate cause and explains why the Confederate army revolted against Abraham Lincoln’s principles. Although a pious and stern general, Stonewall Jackson was revered by his subjects, and on his untimely death the soldiers lost their purpose and heart. The story culminates into the battle of Gettysburg leading beautifully into the sequel. 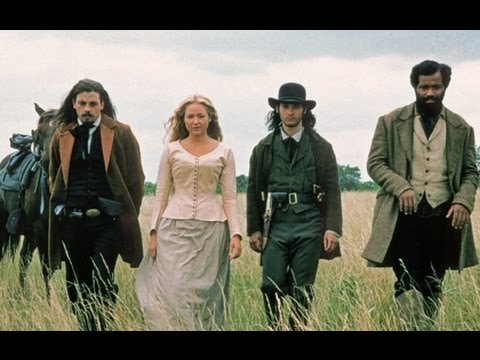 When his father is killed by pro-Union soldiers, Jack Bull decides to join the Confederate group Bushwhackers with his friend Jake Roedel. In their journey, the two friends join hands with other supporters of the Confederate cause and cross swords with many Union soldiers. A widow Sue Lee Shelley falls in love with Jack Bull and starts living with him. Amidst this show of revolution the Civil War breaks out, and another faction of Bushwhackers vows revenge against the Union soldiers. When the 19-year old Jack finally realises what he has gotten himself into he must decide whether the ride with the devil is worth it. 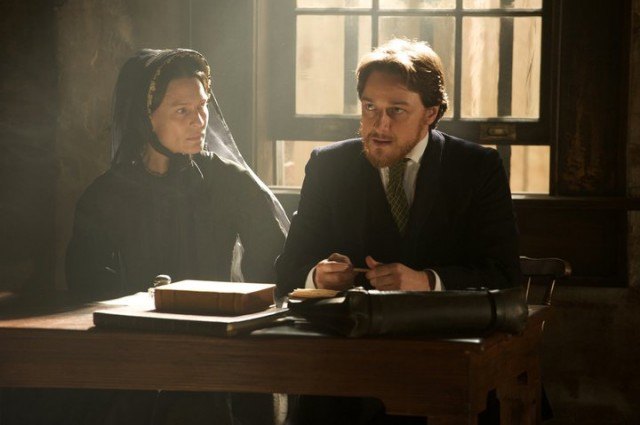 After the Assassination of Abraham Lincoln, the entire nation remains shaken. Seven men and one woman have been arrested under the suspicion of conspiring to murder the president of United States, the Vice President and the Secretary of State in cold blood. When Frederick Aiken, an attorney reluctantly takes the case of defending Mary the only woman charged with the heinous crime he is quite reluctant because of his patriotic spirit. However, as the layers of the strange and complex plot are peeled Aiken realises that his client might be innocent and the whole drama been played to catch her son the main conspirator behind the murder. 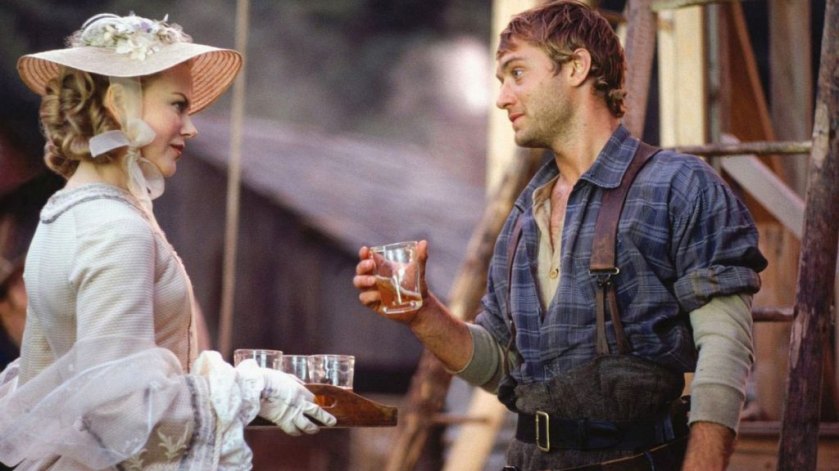 Cold Mountain is a movie describing how the Civil War affected individual lives by focusing on three different ones. Inman is a Confederate soldier who has seen the horrors of war and is now returning to his sweetheart in Cold Mountain, North Carolina. The love of his life Ada, on the other hand, is awaiting his return while dealing with the loss of her father. All thanks to the war she has lost a lot of things, and when Ruby comes as a respite, she welcomes her with open arms. Now stuck in a love triangle these three people must find out how much their lives have changed and how to deal with it. 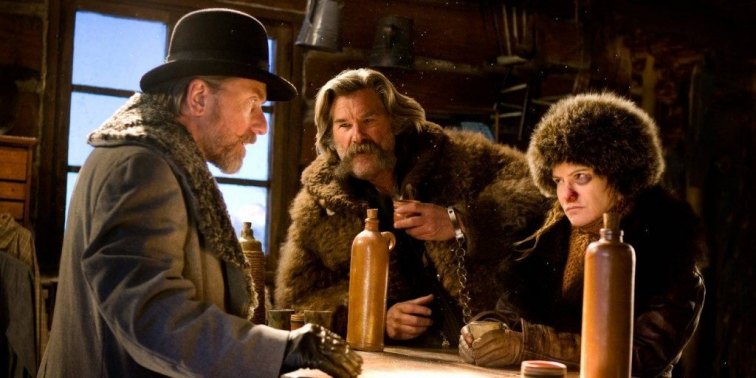 A post Civil War movie, Hateful Eight is the latest in Quentin Tarantino’s exploits. An eccentric plot with a lot of parallel plotlines converging into a single one, Hateful Eight is a typical Tarantino movie shot in the middle of a blizzard. A snowstorm has taken over the cold town of Wyoming, and in the middle of that storm is bounty hunter Joe Ruth and his bounty Daisy Domergue. When Ruth arrives at an inn in the middle of the cold desert, he is greeted by unfamiliar faces claiming to be the caretakers and passing travelers. As the dark pasts of each of the travellers unfold slowly and steadily, the group realises only of them might make it out of that wooden room alive. 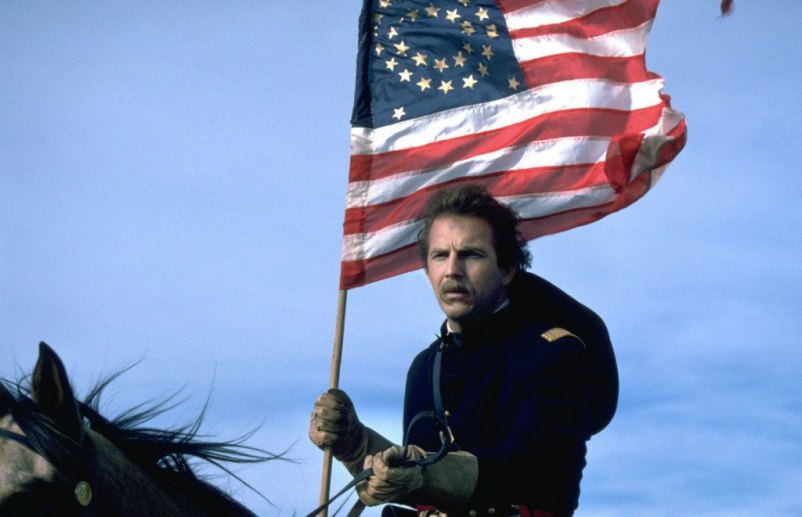 A film adaptation of a book of the same name, Dances with Wolves is one of the best movies made to date on Civil war. After he leads a Union troop to victory in the Civil War Lt. John Dunbar is hailed as a hero. He is given a choice for posting, and he foolishly chooses the Western front. When the brave war hero reaches there, he doesn’t find any fighting. Alone in the wilderness, he develops a friendship with wild wolves and then starts living with the Lakota Indian tribe. There he learns the way of the Indians and gradually falls in love with a girl of the tribe. Just when Dunbar gets comfortable and decides to leave the war to live in the wilderness, the Union soldiers arrive with a mission to annexe that area. How will Dunbar react now and will he be able to save his safe haven? 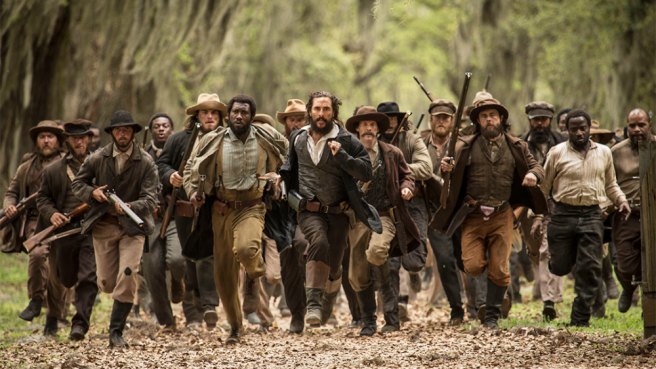 Amidst the Civil War, the state of Jones is ruled by the corrupt and brutal Confederate soldiers who take crops and livestock as taxes to keep the war running. Dead centre in the Confederate territory Jones County Mississippi dares to challenge the Confederate rule by declaring itself a free state. Struggling to survive amongst this mayhem is Newton Knight, an ex-soldier and medic of the Confederate army who thinks that the brutal rule of the Confederates must be stopped. In this jest of his against an impending government, while the bloody civil war is going on, Newton is joined by the revolutionaries with similar causes. They must survive atleast until slavery is abolished from America. 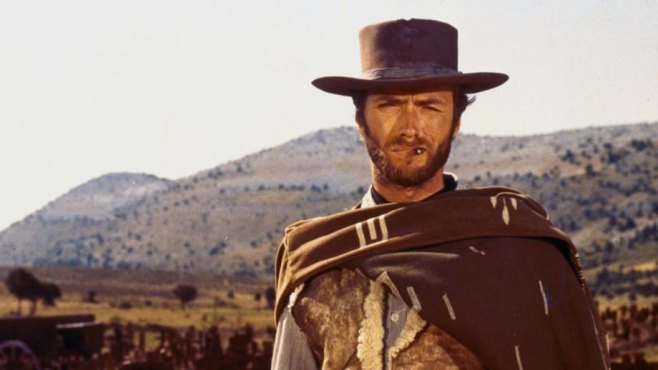 A classic western starring Clint Eastwood, this movie tells the story of a bandit trio operating in the middle of the Civil War. Blondie is as good as they can get in bounty hunting who has joined arms with Tuco the ugly one. The bad one or the antihero Angel Eyes is following them in their jest to find hidden loot. The three of them are searching for a buried gold treasure the location of which was told to them by another looter. When the sinister Tuco hatches a plan of his own and unaware Blondie follows in his footsteps the plot thickens, and it is up to Angel Eyes to save one of them. Who will Angel Eyes save and part the gold with? 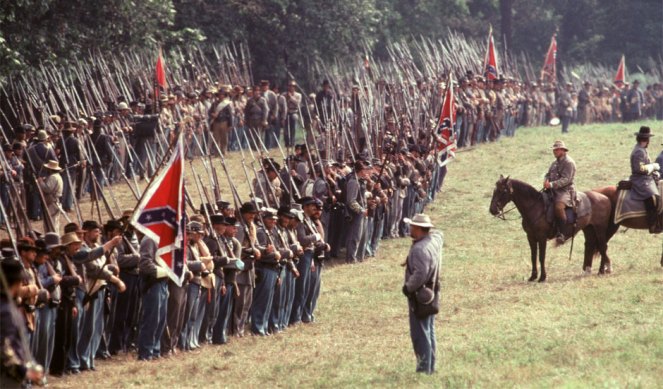 Based upon the novel ‘The Killer Angels’ this movie is a four and a half hour long portrayal of the prime moment in the Civil war: the battle of Gettysburg. With several Civil War enactors bringing to life the lost pages of history on the very grounds it happened upon, this one gives a brilliant insight into what happened in that bloody war and how it affected the lives of common people. With several memorable acting performances, Gettysburg will take you to a time when slavery was considered legal and keeping slaves a birthright. 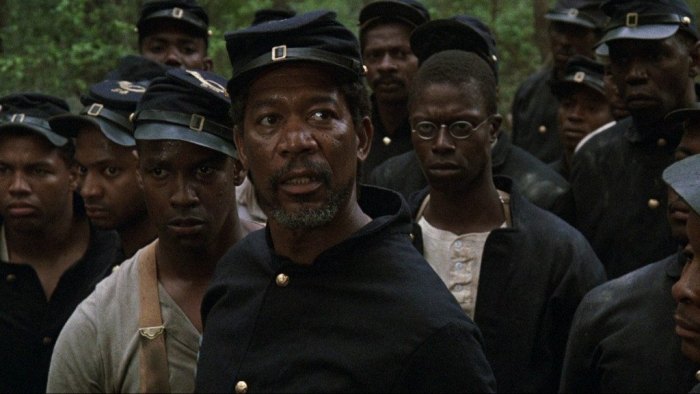 Robert Shaw is a Civil War Union soldier who had to leave army because of his injuries. Upon returning home, he is given a choice: to retire with honour or lead the first all-black battalion of the Union army. He accepts the latter and facing great prejudice from his own subordinates trains his soldiers in the ways of war. The movie tells the epic story of the attack of 54th Regiment Massachusetts Volunteer Infantry on Fort Wagner, a stronghold of the Confederate army. Thought the fort was never taken by the Union army, it was symbolic in the revolution of Union against the Confederates. The glory that the regiment brought to their peers can never be forgotten.

The 16th president of the United States, Abraham Lincoln didn’t become the best president the free world has seen till date without any reason. With a sound mind and relentless approach, President Lincoln left his dark and sordid past behind and fought against all the odds to abolish slavery. Amidst the Civil War and several able men getting slaughtered on both sides, the movie shows the efforts of Lincoln and his associates to pass the bill that abolished slavery for good in the parliament. Standing against him are the people who won’t see the inhuman ways changed for their own profit. With an Academy-Award-winning performance from Daniel Day-Lewis, Lincoln is a fabulous portrayal of the crown jewel of Lincoln’s reign and how the Civil war affected it.