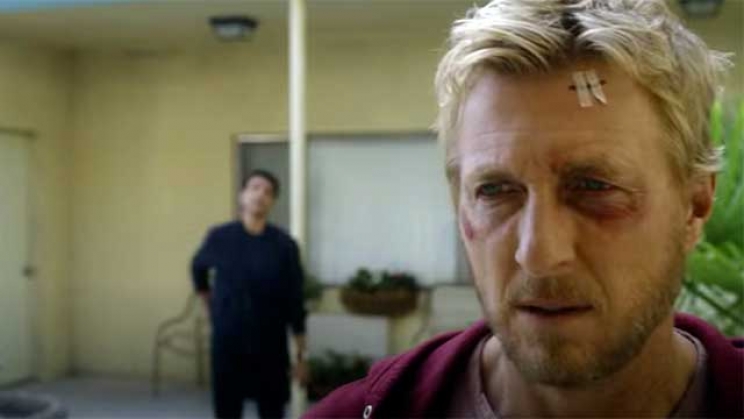 The centerpiece of the penultimate episode of the 3rd season of ‘Cobra Kai’ is the return of a beloved character with whom both Johnny (William Zabka) and Daniel (Ralph Macchio) have history. For a series like ‘Cobra Kai’ to work, the showrunners have to ensure that the fan service and easter eggs land perfectly because the nostalgia factor is the show’s selling point. The third season explores the mythology established by the original films much more thoroughly than the previous two editions. It also seems to have bartered the show’s self-aware comedy in exchange for emotional elements. SPOILERS ALERT.

Episode 8 ended with Johnny and Carmen (Vanessa Rubio) taking their relationship to the next level. In episode 9, titled ‘Feel the Night,’ they wake up together as sunlight filters into the room. They decide to have a conversation later about what the future holds for them.

As Carmen leaves for work, Johnny discovers that he has a new message from Ali (Elisabeth Shue), telling him that she is in town for the holidays and is wondering if he wants to have lunch together. Daniel and Miguel (Xolo Maridueña) have a long-overdue conversation, during which they find out that they have more things in common than not. Robby (Tanner Buchanan), Eli (Jacob Bertrand), Tory (Peyton List), and some other Cobra Kai students break into the zoo and steal a cobra for Kreese.

After Daniel catches Miguel and Sam (Mary Mouser) being intimate at the dojo, his fatherly instincts get triggered. As he still knows Miguel as a kid who cheats in Karate tournaments and bullies fellow students at school, he doesn’t have a high opinion of the boy. But as they sit together in the car that Mr. Miyagi gave Daniel all those years ago and talk, they realize how similar their lives are.

Both are sons of struggling single mothers. Miguel has heard the stories about Johnny’s and Daniel’s youth from Johnny’s perspective, which negatively portrays Daniel. Now, he gets the other side’s account as well. Afterward, Daniel’s view of the boy has evidently changed, and even Miguel can feel that. Before he leaves to meet up with his wife, Daniel even shakes the youth’s hand.

Getting Kreese a New Pet

A few episodes earlier, Kreese used his pet cobra in an attempt to intimidate the LaRussos. So, his students decide to get him another one from the zoo. They break into the facility but are forced to retreat when they discover that they don’t have a snake pole. However, Robby stays behind in the zoo, grabs the snake with his hands, and puts it in a bag. When they return to the dojo, Kreese is visibly impressed. He correctly guesses that the students of Daniel and Johnny are planning to work together and carefully incites his students, especially Tory, to be violent against them.

The Return of Ali Mills

In ‘The Karate Kid’ mythos, Ali is arguably as important as Johnny and Kreese. She was both Daniel’s and Johnny’s first love, as well as their first heartbreak. As Johnny waits for her at a high-end restaurant, his discomfort and anxiety become quite palpable. And yet, the moment she walks in, they start to disappear. Initially, he thinks that it will be better not to mention his struggles after high school but then decides to be candid with her. In response, Ali speaks about her regrets and failures.

Johnny learns about her life in Colorado, her estranged husband, her writer and soccer player son, and her punk rocker daughter. Before they part ways, in those remarkable seconds drenched with pure nostalgia, there is even a hint of romance. Ali asks him to accompany her to a party. Johnny happily agrees. He puts on a white suit and even has a little skip in his step as he arrives at the gathering. But then he sees her speaking to Daniel, and the old wounds get opened again.