For All Mankind Season 2 Episode 1 Recap and Ending, Explained

‘For All Mankind’ is an intriguing exploration of alternate history where the Soviets are the first humans to land on the moon. As NASA puts its resource together to counter the Soviet Union’s leverage in the Space Race, the latter upstages the USA again by sending the first woman on the moon. The USA accelerates its space program and successfully sets up a base near the Shackleton Crater.

As the series progresses, we see the journeys of the lead characters like Ed Baldwin, Gordo Stevens, Ellen Waverly, and Margo Madison. Moreover, NASA successfully trains a batch of female astronauts who prove their mettle by completing daunting tasks and establishing personal feats in space flight. The happenings cover the timeline from 1969-1974. At the end of the first season, we see a time jump as the narrative forwards to 1983. We were eager to unravel the details of the first episode of ‘For All Mankind’ season 2. Here’s what we found. SPOILERS AHEAD.

For All Mankind Season 2 Episode 1 Recap

The episode opens with multiple vignettes that establish the parallel history of the show. President Ronald Reagan is the 39th President of the USA. The Soviets have withdrawn from Afghanistan, and John Lennon has survived his assassination attempt, as has Egyptian president Anwar Sadat. We are officially in the 1980s, which sees some major changes from actual history.

The Jamestown base has become a thriving camp where many astronauts from different allied countries are accommodated for varied research. Ellen is in charge of the base as we see Molly conducting a geological study regarding the presence of lithium on the surface of the moon. The astronauts watch the rising sun, which is a beautiful spectacle. Margo Madison is the new Director of NASA, and she has to work together with Nelson Bradford, a top-ranking military official. Ed Baldwin has become the Chief of Astronauts at NASA. 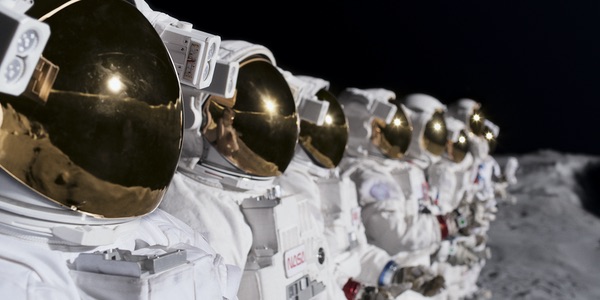 Meanwhile, the Cold War has accelerated as the Soviets and the Americans have started testing new space shuttles that will give them an edge in the Space Race. An observation from Skylab, NASA’s space station, shows a massive solar flare releasing an unprecedented amount of proton radiation that can jeopardize the lives of people in outer space. The Jamestown base has less than half an hour to reassemble inside the base. With the dangerous storm approaching, certain developments are on the horizon that can change the status quo.

For All Mankind Season 2 Episode 1 Ending: Why Does Molly Remove Her Radiation Badge?

When the solar storm is at its peak, Molly is on the moon’s Southern Ridge, looking for lithium deposits. All the other astronauts scramble back to the base, but one of them meets with an accident while driving a lunar module. Molly locates him at a distance and decides to rescue him. She removes her radiation badge, braves the proton storm, and pulls her colleague to a covered area. It is revealed that the badges turn red when exposed to radiation beyond a permissible limit.

Molly decides to remove her badge to hide the fact that she exposes herself to the storm. She knows that if the truth comes out, there is a fair chance of her being deported back to Earth. Molly doesn’t want to risk the disengagement of her research, and the bravado depicts her self-less attitude when it comes to critical situations.

Why is the DEFCON-3 Protocol Initiated?

As the news of the solar storm reaches the NASA headquarters, Norman Bradford is concerned that it might hamper their surveillance capacity on the Russians. Margo informs him that the solar storm will damage the surveillance satellites of both the USSR and the USA, affecting them equally. Bradford argues that the Soviets might use this blackout to their advantage and perhaps attack the USA.

Going one step further, he says that the USSR will initiate their defense protocols in the apprehension of an American attack. There is an immense fear and lack of trust that forces Bradford to initiate DEFCON-3 protocols, purported to be a defense mechanism that is two steps away from a nuclear-level threat. Madison is visibly surprised at this extreme step but cannot do much to stop the emergency protocols. Her reasoning fails as Bradford seems to have the upper hand regarding military decisions.

The DEFCON-3 protocol throws light on the Cold War situation that has accelerated in the 1980s. NASA is working in close quarters with the Pentagon. In a particular scene, we get to know about President Reagan’s apprehensions regarding the weaponization of the new space shuttle, Pathfinder. Moreover, Gary, an aspiring astronaut, expresses his candidature for the Pathfinder mission, indicating that it might be launched within some time. The NASA administration also fears that the Soviets are probably arming up their lunar base. It will be safe to assume that the purpose of scientific research has mutated to defense strategy in the atmosphere of fear, entailing the acceleration of the Cold War.

What Happens to Gordo Stevens?

Ed and Gordo have still maintained their friendship across the time leap. Gordo is perhaps in the retirement stage of his career as we see him giving speeches in Rotary Clubs. Gordo’s past doesn’t seem to leave him as he is asked about the story where he had apparently rescued Danielle from the Jamestown base. We can assume that the truth hasn’t yet been disclosed, and Gordo is happy to continue the charade and joke about the Soviets being the Native Indians who were displaced by the American settlers.

The past developments have taken a toll on his character, and it is revealed that his marriage with Tracy is over. On the other hand, Tracy has become a celebrity for her heroic exploits, and she discloses her new relationship on television. It remains to be seen how Gordo’s character unfolds further in the light of these new developments.

Read More: For All Mankind Season 1 Recap and Ending, Explained