From Scratch Ending, Explained: Does Amy Stay in Sicily? 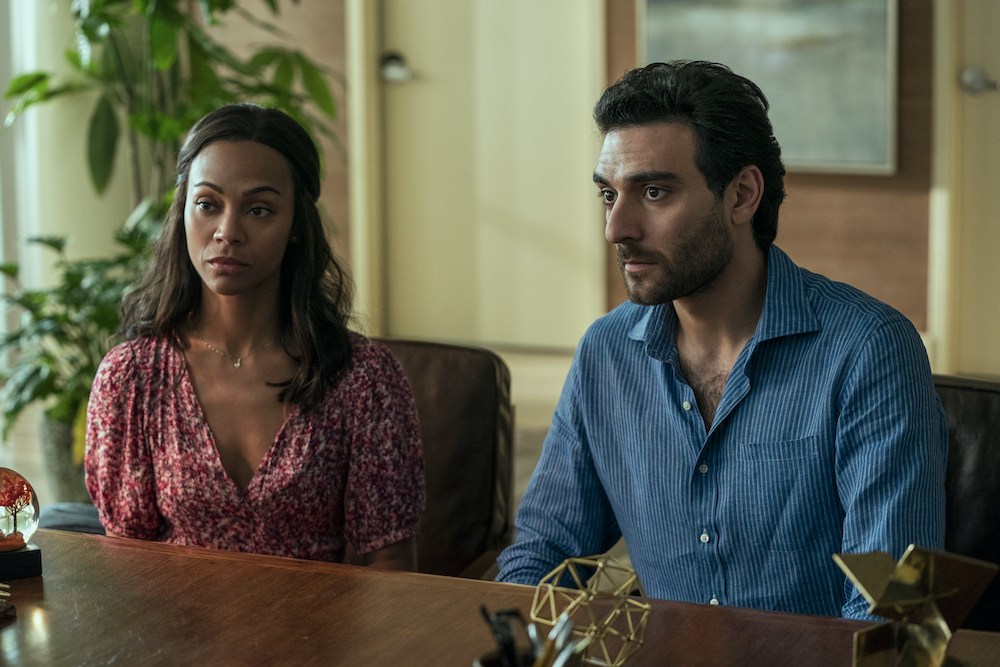 Based on Tembi Locke’s memoir of the same name, ‘From Scratch’ follows the story of Amy and Lino. Amy arrives in Florence to study art, where her path crosses with Lino’s, a young Sicilian chef who left home to follow his dreams. Sparks fly between them as he falls in love at first sight, and later, Amy falls head over heels for him too. However, their happily-ever-after takes a tragic turn and the couple has to rely on their family and friends to survive the challenges in their lives. The complications in their relationships take a backseat as both Amy and Lino’s families rise up to the occasion and become their support systems. In the end, Amy faces a tough decision, especially considering the future of her daughter. Here’s what the future holds for them. SPOILERS AHEAD

Amy and Lino meet each other in Florence. Initially, Amy dates another guy, but the connection that she shares with Lino is too strong to ignore. When the time comes for her to leave Florence, Lino decides to follow her to America. While they begin their new life in Los Angeles, Lino struggles with the rift that has developed between him and his family over the years.

He’d left home years ago, against the wishes of his father, who wanted him to stay back in Sicily and become a farmer. Now that Lino has fallen in love with an American and has moved to an entirely different continent, the distance between him and his family has increased. The situation gets so bad that they don’t even attend Amy and Lino’s wedding, which takes place in Florence.

Things get better for the couple as both of them find themselves on the path they wanted for their careers. After a successful run at an art gallery, Amy gets a proposal to work at the Watts Tower Arts Center. Lino, on the other hand, succeeds in taking over the restaurant where he’d been working disgruntedly. But just when it looks like they might have it all, Lino is diagnosed with a rare soft-tissue cancer. This plunges both of them into emotional, financial, and physical distress, and tests their love and patience. Fortunately, the treatment works and Lino’s cancer regresses. With a second lease on life, they decide to start a family and adopt a daughter, named Idalia. For a few years, they find happiness, but then Lino’s cancer returns, and things go downhill from there.

From Scratch Ending: Does Amy Stay in Sicily or Does She Go Back to California?

Following Lino’s death, Amy completely breaks down. She is unable to even get out of bed in the mornings. It isn’t until Zora implores her to find strength for the sake of her daughter and to fulfill Lino’s wish of taking his ashes back to Sicily that Amy puts herself together. While she has a few inhibitions about going back to Sicily, where only her mother-in-law remains to welcome her, she soon discovers that it had been a decision for the better.

Once in Sicily, Amy gets in touch with the place where Lino had grown up. This is the first time she visits his house and his community and discovers how much he was loved back home. The whole neighborhood mourns for Lino, but they also see Amy with a different lens, because she is still a foreigner to them. While Amy processes her loss, she starts to bond with her mother-in-law. She also begins to wonder if she should ever return to Sicily, while it looks like Filomena wishes to extend their stay a bit longer.

Amy feels particularly cornered when she discovers that Filomena wishes to pass on the house and their land to Amy and Idalia. She feels like she is being forcibly tied to Sicily. While she struggles with the idea of being smothered into staying there, spending more time in the town starts to change her perspective about its people. She starts to look at the community and the farms and the fields that Lino grew up in differently, especially when small things about his past start to pop up. She also finds comfort and support in Filomena, who’s also been through the grief of losing her father and her husband before she lost her son. Meanwhile, Idalia, too, starts to get familiar with the place. As she plays with her cousins and explores the town, she becomes more comfortable in the place, which comes as a surprise, as well as, a relief to Amy.

As she starts to warm up to the idea of not completely abandoning Sicily just yet, her mother-in-law advises her to invite her family to join her there, for her birthday, which happens to fall on the same day as La Festa di Sant’ Anna, the patron saint of widows and travelers. As her family joins them in Castelleone, Amy’s spirit soars. She realizes that she has to keep her daughter in touch with her Sicilian roots and that it is the only place where she can get to know more about her father and connect with him.

After the procession and the feast, Amy sits down with her entire family, her own as well as Lino’s and feels closer to her husband. She knows now that she can’t cut Sicily off from her life. Lino would have wanted her and Idalia to form an everlasting bond with his hometown, and Amy intends to honor that. As she spreads his remaining ashes, the one that she’d kept in her necklace, she feels like Lino is finally home. And that she and their daughter, too, can make a home for themselves here. So, while she goes back to LA, she and Idalia will surely return to spend time with Filomena in Sicily.

Who was Tonino from Lino’s Story?

When Amy and Lino brought Idalia home, it fell on Lino to take care of her. He couldn’t resume his professional career due to his illness, and dedicated himself to taking care of their daughter, while Amy became the breadwinner of the family. Every night, Lino would tell a story to Idalia, the most notable of which was the story of Tonino and his goat, who would go on all sorts of adventures. The father and daughter would cook up stories about the two, based on simple premises like Tonino giving his shoes to his goat, the shoes that didn’t fit the animal because of its hooves.

It is years later when Amy and Idalia visit Sicily that they discover that Tonino and his goat were characters from Lino’s childhood, and the stories that he made up about them were from instances in his own life. Amy takes Idalia on a short hike, where they meet a man named Antonio and his goat. He talks about Lino and how they grew up together. He tells them about the time when they would play soccer together and he gave his shoes to Lino, even though they were too big for him. This reminds Amy and Idalia of Tonino and his goat, and it turns out that it was a nickname given to Antonio.

In any other instance, it would have been a simple, though amusing fact about Lino. But with him gone, every small thing that Amy and Idalia discover about him helps them to connect with him and understand him better. They barely knew anything about his hometown and his childhood and to find out that he had indirectly told them a lot about himself through his stories, comes as a pleasant surprise to them. This is one of the things that convinces Amy that she can still get to know her husband and be close to him by being close to the people that he grew up with. She realizes that Lino’s essence is still in his hometown and she can’t deprive her daughter of her father’s roots. Knowing that Lino is still a part of their lives helps them grieve and heal from their loss.

Read More: Is Netflix’s From Scratch Based on a True Story?