Fruits Basket Season 3: Everything We Know

Written and Illustrated by Natsuki Takaya, ‘Fruits Basket’ is a Japanese romantic-comedy manga series that inspired the anime series of the same name. The anime follows Tohru Honda, who lives with her grandfather after the death of her mother in a car accident. Unfortunately, she soon has to live in a tent because of some ungrateful and unkind family members. As fate would have it, even her tent can’t escape her bad luck as a landslide destroys it. But it turns out to be a blessing in disguise as she moves in with the Soma family following the unfortunate incident.

Tohru learns that the animals of the Chinese zodiac possess the members of the Souma family. With her kindness, she helps them heal from the hardships and tribulations that come with the curse. The first two seasons of the show were a massive success. If you are also a fan of the series and are wondering when season 3 will release, here is everything we know.

Fruits Basket Season 3: When Will it Premiere?

‘Fruits Basket’ season 2 released on April 6, 2020. After 25 episodes, it concluded on September 21, 2020. However, it is pertinent to note that there are actually two anime adaptations of the eponymous manga. For your reference, we would like to point out that the first one was released in 2001 and consists of 26 episodes.

Coming back to the second and more recent adaptation, as far as the third season of the series is concerned, we have a piece of good news for the fans. The official Instagram account of the show confirmed that the third and final season of the series will be happening. Season 2 ended on an emotional note. Kureno’s and Akito’s secrets were revealed, and it shocked the ‘Fruits Basket’ fandom. 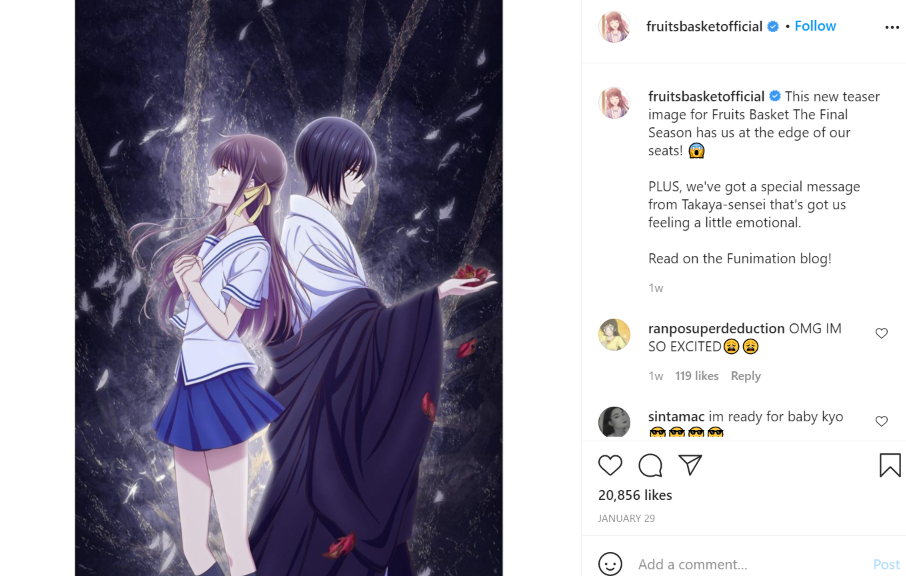 If they are a sign of things to come, then the upcoming season is going to be full of twists. It will expectedly cover the entire rom-com manga written by Natsuki Takaya. Since the first two seasons have aired in April previously, we can expect the same for season 3; it is likely to return for one last time this summer. Going by the pattern of the previous releases, we can expect ‘Fruits Basket’ season 3 to return in April 2021 and conclude by September 2021.

Where to Watch Fruits Basket Online?

‘Fruits Basket’ is available on Hulu and Crunchyroll. Fans can get both subbed and dubbed versions of the series on FUNimation. Viewers from European countries (especially France) can watch it on Wakanim. In China, ‘Fruits Basket’ can be streamed online on Bilibili.

Season 3 of ‘Fruits Basket’ is likely to surprise most of its fans. The twists and turns will be emotional and overwhelming to handle, to say the least. Tohru will finally realize her feelings for Kyo. The fans will also get to know Kyo’s secret, which will likely bring more problems in his relationship with Tohru. The series will also explore Akito’s and Kureno’s complicated relationship. There are a lot of questions that fans are expecting to get answered in the final season. Season 3 of the series will be one of the most heartbreaking so far. ‘Fruits Basket’ is coming back for one last time, so do prepare yourself for an emotional rollercoaster.

Read More: Slice of Life Anime You Must See