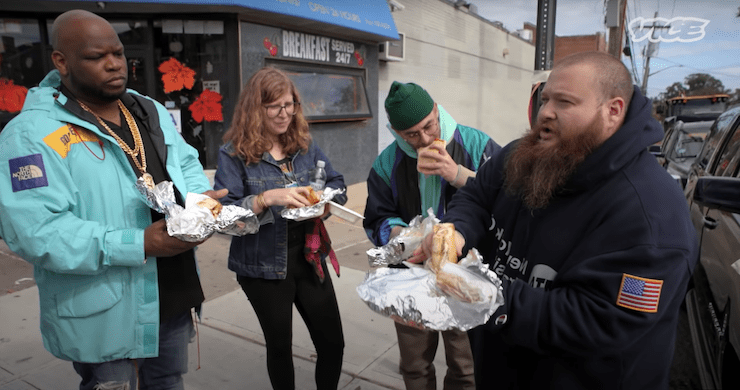 When it comes to food documentaries, most shows generally follow a similar tone and approach. A food celebrity visits various places to explore culinary traditions in a lighthearted, cozy manner. However, Viceland’s ‘Fuck, That’s Delicious’ switches things up, and that’s pretty evident with its title.

‘Fuck, That’s Delicious’ follows the rapper, Action Bronson, as he travels around the world to explore all things related to food. He explores everything from fine dining to street food. There are episodes where he discusses some of the tastiest food that one can consume after smoking a blunt or two. It need not be said: dem munchies are real. Not a lot of people know that Action Bronson is not a newbie to the world of food. He was a gourmet chef in New York City before he became a rapper. He even had his own online cooking show known as ‘Action in the Kitchen.’ However, he decided to focus on his music career after breaking his leg while cooking.

Where is Fuck, That’s Delicious Filmed?

The first episode of the fourth season is all about American food. The episode was uploaded on YouTube and sees Action Bronson sample food from various eateries in New York City.

The third season begins with an episode that is set and filmed and Queens. The fourth episode of the season was also filmed in Queens.  In fact, a large chunk of the third season is set and filmed in various places in New York. For instance, the fifth episode of the season sees Bronson try Caribbean food in New York City. Moreover, Bronson and co. also head to New Jersey to eat at some of the finest restaurants.

Queens: A Food Thug's Paradise – F*CK, THAT'S DELICIOUS (Full Episode) – Action Bronson and his crew show us how a simple stroll under the 7 Train in Queens can yield incredibly delicious results.
WATCH NEXT:… RT! pic.twitter.com/uzVqT6P8EN

The second season of ‘Fuck, That’s Delicious’ begins down under. In the season premiere, Bronson visits Sydney to try fried chicken and natural wine. The next Australian city that he visits is Perth, in the second episode of the season. Then, Bronson goes to New Zealand and films an episode in Auckland.

In the same season, Bronson also visits various eateries in Hawaii. Have a look:

Then, he heads to Barcelona, where he competes with Meyhem in a paella cook-off.

Some of the other locations that Bronson visits include Naples in Italy, Copenhagen, Los Angeles, New York City, Chicago, and Tokyo.

In the first season too, Bronson travels to a diverse set of places. Bronson visits places like Atlanta, Miami, Vancouver, the United Kingdom, Amsterdam, Morocco, Alaska, Paris, and of course, New York.