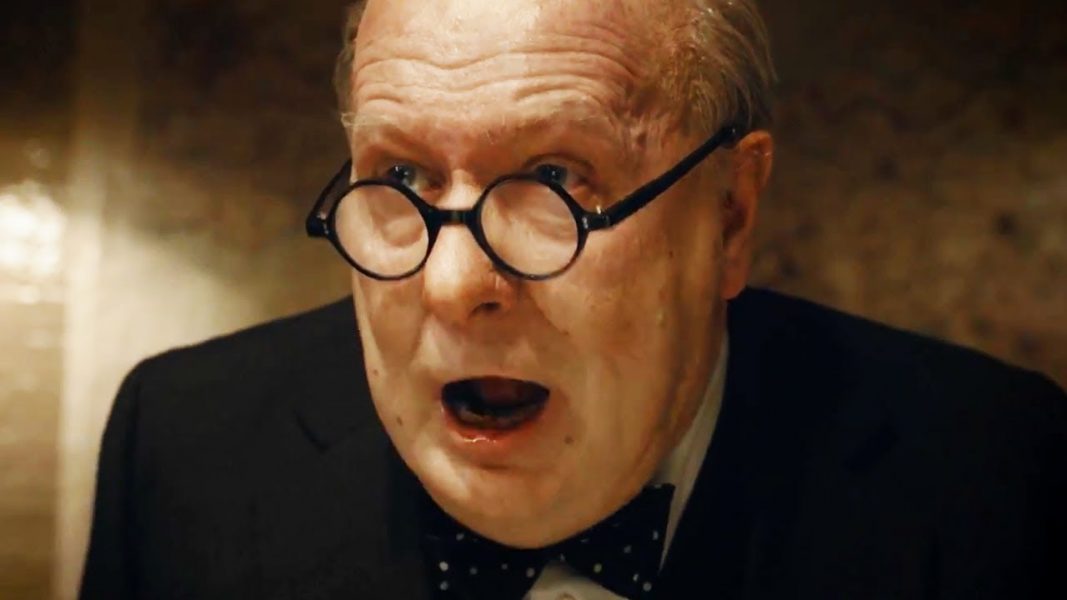 At the end of a great career should there be an actor, director or producer who has not won an Oscar for their achievements, the Academy votes them a Lifetime Achievement Award, an Honorary Oscar. Among the non-winners in the competitive categories to receive this award have been Charles Chaplin, Alfred Hitchcock, Peter O’Toole, Spike Lee, Barbra Stanwyck, Blake Edwards, and Henry Fonda (who won the following year). So if the Academy feels guilt that they have never awarded Gary Oldman an Oscar, rather than give him one for a performance that is lesser than others in the year, vote him a Lifetime Achievement Award. Why cheat a genuine Best Actor quality performance for a silly sentimental award? That happened in 1992 when Al Pacino’s over the top ranting and Hoo Hawing in Scent of a Woman (1992) was voted superior to Denzel Washington’s astonishing Malcom X (1992).

Oldman is at this writing the frontrunner for the Oscar as Best Actor for his showy turn as Winston Churchill in Darkest Hour. It is neither the best performance by an actor this year or the best of Oldman’s career, a performance that reminded me of the hammy work of Laurence Olivier. He has not won a single mag or film critics Society award for the performance. Hiding under loads of prosthetics and bulk, Oldman never convinced me he was Churchill, not in the manner other actors have done. And like many critics, I do not find myself spewing out superlatives in praise of his performance, it was good, but nothing more, certainly not Oscar worthy.

For the record I have always hated the sentimental wins. Bogart in The African Queen (1951) besting the astounding Brando in A Streetcar Named Desire (1951), Jack Lemmon wins Best Actor for Save the Tiger (1973), Art Carney for Harry and Tonto (1974), George Burns wins Best Supporting Actor for the Sunshine Boys (1975), Melvyn Douglas wins for Being There (1979), Henry Fonda, Best Actor in On Golden Pond (1981), Geraldine Page wins Best Actress in A Trip to Bountiful (1985), Pacino in Scent of a Woman (1992), James Coburn wins for Affliction (1998), Michael Caine wins a second for supporting actor in The Cider House Rules (1999), and Jeff Bridges in Crazy Heart (2009) have all bested superior performances to win Oscar…does that seem at all fair? And frankly some of the greatest performances in film history have lost to Honor sentimental choices!

Oldman is on the path to glory to win Best Actor, whether I agree or not. But still I want to list down 10 reasons why he does not deserve the Oscar.

1. James Franco in The Disaster Artist – This was the best performance I saw this year, Franco’s hilarious but spot on performance as mysterious filmmaker Tommy Wiseau. Speaking in a curious European accent, his long black hair and bizarre dress giving the look of a vampire, Wiseau had great ambition and a deep bank account, but no talent at all. His film The Room (2002) is regarded by many as the worst film ever made, which it just might be. Franco inhabits the role in every way, becoming Wiseau before our eyes. An astonishing performance from a gifted young artist who continues to show greater depth.

2. James McAvoy in Split – released nearly a year ago, this extraordinary performance is still celebrated and discussed. If anyone deserves to be nominated it is McAvoy who convincingly portrays seven of his twenty three personalities in this fine thriller from Director M. Night Shymalan. With the turn of his head, a change in his eyes, the slightest change in body language, he becomes another character within the same character. His dance as Hedwig, the nine year old boy is fierce and brash, alarming, dangerous in its raw fury as is the entire performance.

3. Tom Hanks in The Post – Two time Academy Award winner Hanks, who has not been nominated for sixteen years has deserved nominations since, Road to Perdition (2002) and Captain Phillips (2013) most notably, and deserves to be there this year for The Post. As ambitious, crusty editor of the Washington Post he is superb, sharing many scenes with Meryl Streep. The only drawback was Jason Robards won supporting actor for his stunning portrayal of the same character in All the President’s Men (1976).

4. Timothy Chamalet in Call My By Your Name – The major breakthrough actor of the year, Chamalet has already won the LA and NY Film Critics Awards for a Best Actor and is a shoo-in for an Oscar nomination. He is remarkable as a young man who, one summer in Italy, falls in love with his father’s assistant, a blonde hunk portrayed by Armie Hammer. The maturity of his performance is extraordinary, the courage equally so. If anyone is the dark horse and possible winner this year it is him.

5. Daniel Day-Lewis in Phantom Thread – With three Best Actor wins, the most of any actor in film history, I seriously doubt Day-Lewis has a chance of winning again, but once again this immensely gifted artist will be in the running. In a career in which he has worked infrequently, when he wanted too, he won a Oscars in 1989, 2007, and 2012. He will likely be nominated this year, and is a more worthy winner than Oldman, but a win seems out of reach for Day-Lewis.

6. Denzel Washington in Roman J. Israel, Esq. – Ok, if he wins, it could be considered a make up Award for his loss last year for Fences (2016), but the truth be told the performance is unlike anything the actor has given before, the character, utterly original. Like the rest of the performances listed here, I believe this is stronger work than Oldman gave, and wonderful to watch, but I also recognize he has no chance of winning.

7. Jake Gyllenhall in Stronger – As Jeff Bauman, who lost his legs in the Boston Marathon terrorist attack, Gyllenhall gives the performance of his career. No question he should be nominated, but the race might be too full to include him. Either way I thought his work was bolder and more realistic than that of Oldman.

8. Albert Finney in The Gathering Storm (2004) – The greatest portrayal of Churchill on film, Finney throws himself into the brilliant, pompous, irascible man who took Great Britain into the war. Finney, one of those actors deserving a Lifetime Achievement Award is astonishing. Close your eyes while watching this…you are listening to Churchill, open them and you are seeing Churchill.

9. Brendan Gleeson in Into the Storm (2009) – Another film actor tackles the demanding role, exploring Britain moving into the war, and like Finney, Gleeson is superb. He too captures the voice, the physicality of the man, his presence, everything about him is in this performance. Oldman does an imitation of Churchill, this actor and Finney inhabit the character in every way.

10. No One is Owed an Oscar – No where does it state in the SAG membership book, an actor is owed an Oscar if they contribute a lifetime of excellent work. No where does it state in that same book, that there is a promise of an Oscar for your work. You do the work, you give it your all, and maybe you get nominated and maybe your name gets called. No promises. Ever. And while you might work thirty years without an Oscar no where does it say you are owed, as beloved as you are by audiences or critics. Audiences and critics might bemoan the lack of nominations for certain actors, but that does not mean they are owed a thing.