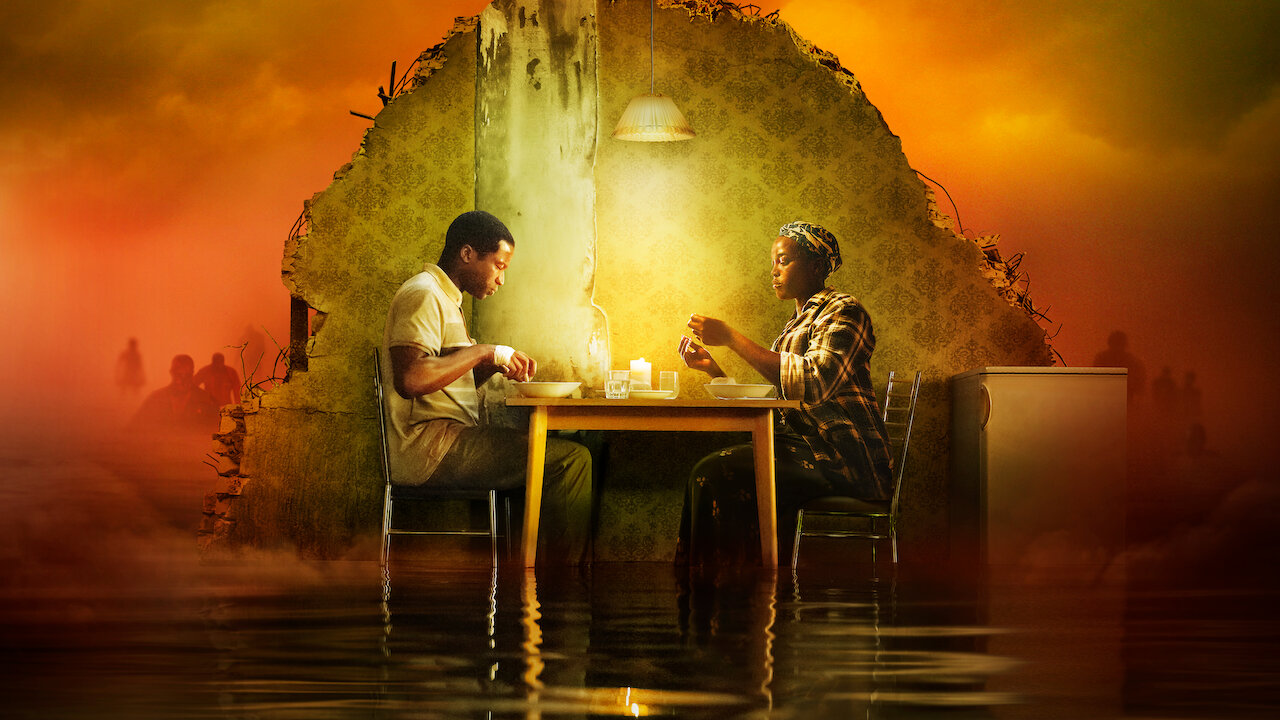 Yet another addition to Netflix’s impressive Halloween 2020 collection, the British horror-drama ‘His House,’ is directed by first-timer Remi Weekes, who also wrote the screenplay, adapting a story Felicity Evans and Toby Venables. The film follows a refugee couple from South Sudan who sacrificed much to get to England. After spending an initial period at a detention camp, they are allocated a house.

Despite its dilapidated condition, the two protagonists are thrilled to have a home of their own after so long. However, they soon start noticing anomalies there and realize that the place might be haunted. A remarkable film that seamlessly blends classic horror tropes with PTSD and survivor’s guilt, ‘His House’ has received mostly positive reviews since its release. SPOILERS AHEAD!

The film opens with Bol (Sope Dirisu) making his way across a desert with Nyagak (Malaika Wakoli-Abigaba) in his arms. They and Bol’s wife Rial (Wunmi Mosaku) get on a truck on their way to leave war-torn South Sudan. While they are on a boat traveling to Europe, several passengers, including Nyagak, drown. After Bol and Rial finally reach England, they are kept at a detention camp for a prolonged period.

And when they are finally let go as asylum seekers, not as citizens, they are told that they must adhere to certain rules. The house they are given is in a terrible condition, and their caseworker Mark (Matt Smith) lists even more rules that they have to follow. Despite all this, Bol and Rial are optimistic and begin hoping to start living their lives normally again. Nyagak’s death looms like an ominous shadow over their plans.

According to Bol, they have grieved long enough, and now it is time to move on. Rial disagrees and clings on to the pain of the loss. They then discover that something evil is residing in the walls of their home. As the film progresses, it is revealed that it has followed them from Africa. Both of them start having visions, and Rial, much to Bol’s horror, start communicating with this being. Trapped in a home that they can’t leave with a supernatural entity, Bol decides to fight back.

Weekes and his writers heavily draw from African mythology and folklore to create the backdrop of the film. They offer an exposition through Rial on the evil entity that has been haunting the couple. Called the “apeth” among the Dinka people, it is a night witch that comes after anyone who it thinks has stolen something precious from it. The way Rial tells the story and how it makes Bol uncomfortable indicate that Bol has done something that has drawn the wrath of the creature.

Why Are Bol and Rial Being Haunted?

Back in South Sudan, Rial used to be a teacher, while Bol was a banker. One day, her school was visited by one of the warring parties, and they massacred everyone there. Rial managed to survive by hiding from them until Bol came for her. They subsequently decided that they have to leave their country for a better life. While desperately trying to get on a bus, Bol notices that people with children are being allowed inside. This is the first time that they saw Nyagak, a young girl shouting for her mother.

Bol grabs Nyagak and tries to get into the bus with Rial. Even when the girl’s actual mother returns and starts screaming for her, he doesn’t let her go. It is this the punishment for this crime that has come after them to London. The apeth reveals to Rial that she can have Nyagak back as long as she cuts open Bol’s flesh, which would allow it to physically hurt him. By then, they have grown quite distant from each other. Bol desperately wants to assimilate into British society, but Rial hasn’t yet been able to give up on her life back home.

The apeth gives Rial visions of her old life in its effort to turn her against her husband. Her long-dead students and fellow teachers are brought back from the imprints that they had left on their memory. But despite all its efforts, the creature fails as Bol sacrifices himself so that Rial can have Nyagak back. Right after that, the apeth appears and starts torturing her husband.

This makes Rial realize that her home is not South Sudan any longer, but it is that ramshackle place in London that she shares with her husband, Bol. She chooses a future with her husband over living in the past. She attacks the apeth with a knife and slit its throat open, ending its effect on their lives.

The Past Remains with Them

The film ends with Mark and two of his colleagues visiting Bol and Rial at their home. They have completely embraced their lives in London, which surprises Mark. Although it appears that they have made remarkable progress, it doesn’t mean that they have completely forgotten their past. Nyagak and every other person they have lost in South Sudan and on their way to England will now forever be part of their memories.

Read More: Is His House a True Story?