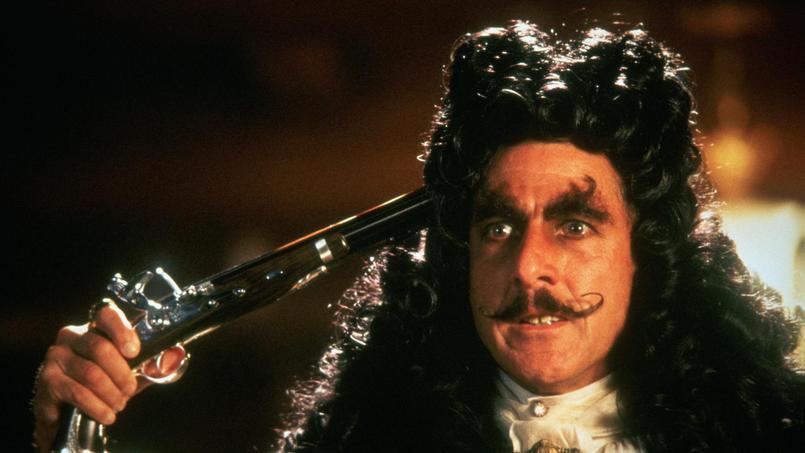 During the screening of Hook (1991) I remember spending a great deal of the time shaking my head in disgust and looking around the theatre. Perhaps I was looking for a clock, or an escape route, perhaps I was trying to look anywhere but at the monstrosity on the screen. I was appalled.  When the film was over I felt nothing but relief, but oddly could not move from my seat.

I still hate it. Hook (1991) represents to me the worst film of Steven Spielberg’s impressive career. The man has not made many weak films, but Hook (1991) is atrocious, a car wreck of a movie.

Steven Spielberg is to me, the single greatest filmmaker in the history of the cinema. His evolution into that was thrilling to watch, but even more interesting was the fact he continued to grow, to evolve after great success, after the Academy Award. He has never played it safe, he has always taken risks.

I love the work of Steven Spielberg, but I hated Hook (1991), on a level even I do not fully understand, for so many logical reasons I  cannot quite believe the depth of my anger, of my hatred for this noisy, terrible film.  For months I had been looking forward to seeing this film because it was Spielberg, with Robin Williams, Julia Roberts, and Dustin Hoffman, a killer cast with a world class director. Mind you, Spielberg had struggled in the few years previous, I was not a fan of The Color Purple (1985) which had a zip-a-dee-doo-dah feel to it, washing away the the anger and rage that was in the book. Always (1989) had some lovely moments in it, Holly Hunter was sublime, especially in her portrayal of grief, but never caught on with either audiences or critics, so Spielberg was in need of a hit. His franchise films, the Indiana Jones films were huge hits, but his personal films were failing. As good as Empire of the Sun (1987) was, is, it failed at the box office despite being a masterpiece.

He had considered a filming of the Barrie book, a live action telling of the story, which had not been done before on film (but was, finally, and beautifully in 2003) and with his childlike innocence seemed the perfect director to do it. Pop star Michael Jackson heard about it and petitioned to play Peter which would have been grotesque, but then a script dropped into his lap with stars attached and a director attached. However when Spielberg wants to direct a film, they are going to let him, so the other filmmaker was paid off to walk away and he began to work on Hook (1991).

What astounds me is that great, creative minds that worked on the film, the writers, Spielberg, the producers and yet they collectively could not see that the weaknesses in the  film were actually an easy fix. The film opens with promise as Peter Pan, now grown, a husband, father and lawyer is unaware of his past, he has forgotten he was once Pan. But Hook has not, and reaches from Neverland to take Peter’s young children, Jack and Maggie, back to Neverland with him. When the very elderly Wendy (portrayed beautifully by Maggie Smith) tells him who he is, he does not believe her. Only when Tinker Bell comes to him does he even start to consider it, but she still has to knock him cold, sprinkle him with fairy dust and kidnap him to Neverland.

There is in the early scenes an old gent named Toodles, who wanders through Gran Wendy’s London mansion claiming he has lost his marbles. Yep, no question, he is loopy. Hair going every which way, wild eyed, and with no teeth, he does seem a tad…touched. Yet it is he who tells Peter after the kids are taken he must learn to crow, to fight, to fly…Hook is back. Later in the film, when Peter has returned to Neverland to retrieve his kidnapped children, he encounters a boy named Thud who gives to him a bag of marbles that once belonged to Toodles, meaning this ten years old boy once knew the now ancient Toodles. Would it not have been cool to see the old man go back to Neverland with Peter and Tinker Bell as sort of a guide, allowing Peter to see childlike wonder never needs to go away and for the lost boys to witness that growing old does mean you become pirate, but rather the same child-like wonder they possess as children can remain with one all through life if permitted? Toodles has never forgotten Neverland, nor Peter, nor Captain Hook nor his marbles, which are not lost at all. Most of all he has not forgotten what it was to be a child, to play.  Had that character returned to Neverland he would have been greeted with open arms which we cannot say of Peter, not until they find his smile. Toodles going home to Neverland changes the entire fabric of the story, for the better, and I cannot believe no one thought of  that!! It seems so easy. There is such bouncy joy in the moments at the end of the film when Toodles does fly, and heads off in ther direction of Neverland, where he has longed to return.

The Neverland created for this film is a jungle of tropical trees, plants, wild colors, and creatures we hear but never see, with the pirate ship of Hook anchored near the city, and never sets sail, it never moves. Hook (Dustin Hoffman) is a speech impaired dandy who demands red carpet be on each step as he descends, believes the men fear him and in many ways is one half of vaudeville act with Smee (Bob Hoskins). The two actors have a great time when onscreen together, but when alone on screen, they are in trouble and Hoffman, one of the screens greatest actors has very little to do but pose.

The Lost Boys (brats) are a gaggle of boys, led by a punk rocker named Ruffio, who calls himself “the Pan” as though he were a God. He is the leader, the best at everything but he cannot fly. He can skateboard and play basketball leaving us wondering when they learned to do that given they have not been in the modern world for many years, if they knew Toodles certainly beyond a century. Ruffio is lethal with a sword, a problem for Peter because he is not, despite having been so when he was Pan, sorry, “the Pan”. Hook gives the Lost Boys and Tinker Bell (Julie Roberts) three days to whip Peter into shape and make him remember who he is so they can have their war. Essentially what he has to do is find his happy thought.

Slowly he begins to play with the boys, using their imagination to find a feast of food and the inevitable food fight. It is here we first see Peter being wicked with a sword when Ruffio, in a snit throw a coconut at Peter without Peter seeing it. Warned he spins with a sword and cuts the thing in half, stunning the boys, Ruffio and most of all himself. But it is in a tree where Peter discovers and accepts who he once was, finding his happy thought. He wanted to be a father, and in Jack and Maggie he finds his happy thought. The thought of his kids has taken him into the air floating with joy, and when he realizes he is in the air, he panics and begins to fall, but catches himself at the last moment, thinks of his kids and smiles, that Peter Pan smile, before exploding into the day sky, taking flight. The Pan is back. He plays with the boys, he teases them, he challenges them and finally Ruffio walks towards him with a sword. Is he going to strike? No he falls to his knees and utters the words, “You are the Pan” and is at once a follower and powerful ally. And so they fight the pirates, and of course they win but at a terrible cost, Hook kills Ruffio. But then Pan kills Hook and returns his kids to their mother, leaving the enormous Thud in charge. He returns the marbles to Toodles, who turns the bag upside down sprinkling himself with fairy dust and at once can fly, and where does he go? Where he should have gone in the first place, to Neverland, to his friends, to his childhood, to play because you are never too old to do so.

What a mess of a movie. Yet beneath the garbage and swill, there was promise. Robin Williams was geared up to give a good performance, and strikes the pose of Peter Pan, hands on the hips, feet planted firmly even before he knows who he is. Very few actors can pull off flying on screen, but Williams does, he looks joyous in flight, and we believe he has found his happy thought.  Yet the story fails him, the lost boys are noisy and annoying, not even cute, Julia Roberts is given nothing to do as Tinker Bell and plays it that way, bored. The ship never moves, the pirates are as dumb and noisy as the lost boys, shooting each other dead from time to time, stupid is as stupid does I guess.

We feel nothing for any one of the characters. Not one, I could have cared less if Hook had killed the kids, if just did not strike emotionally with me at all. How could they have gone so wrong? How could Spielberg have gone so far off the rails? He admits the shoot became a circus with constant visits to the set from other actors and directors, wanting to see the massive sets built in the studios. Not a frame of the film was shot outdoors, as the film took up nine massive soundstages on the lot. Spielberg wondered to himself more than once when arriving on set whether the shoot was getting out of control in the manner 1941 (1979) had. He had Julia Roberts behaving like a diva, actors wanting cameos in the film and getting them, and noise, noise, noise.

I sat there when the film ended stunned by what I had just seen, as horrified as I was the year before when I saw The Godfather Part III (1990).

In the years since I have seen the film again, I had children, they watched it as kids do over and over and over. If the film was on when I entered the room, I would quickly leave unless the girls demanded I stay, which was often, so yes I was punished many time watching this dreadful picture. What is astounding is that despite the critical drubbing the film took, it made money, a lot of money. That said Spielberg does not consider the film among his best, quite the opposite in fact. To give insight into how quickly things turn around in the film industry two years later he gave us Schindler’s List (1993) and would win the Academy Award for Best Director. HIs career since then feels blessed, as though he can do no wrong, and he rarely has, but Hook (1991) is a testament that even the very best can go horribly wrong and fail….huge. Just a terrible film.