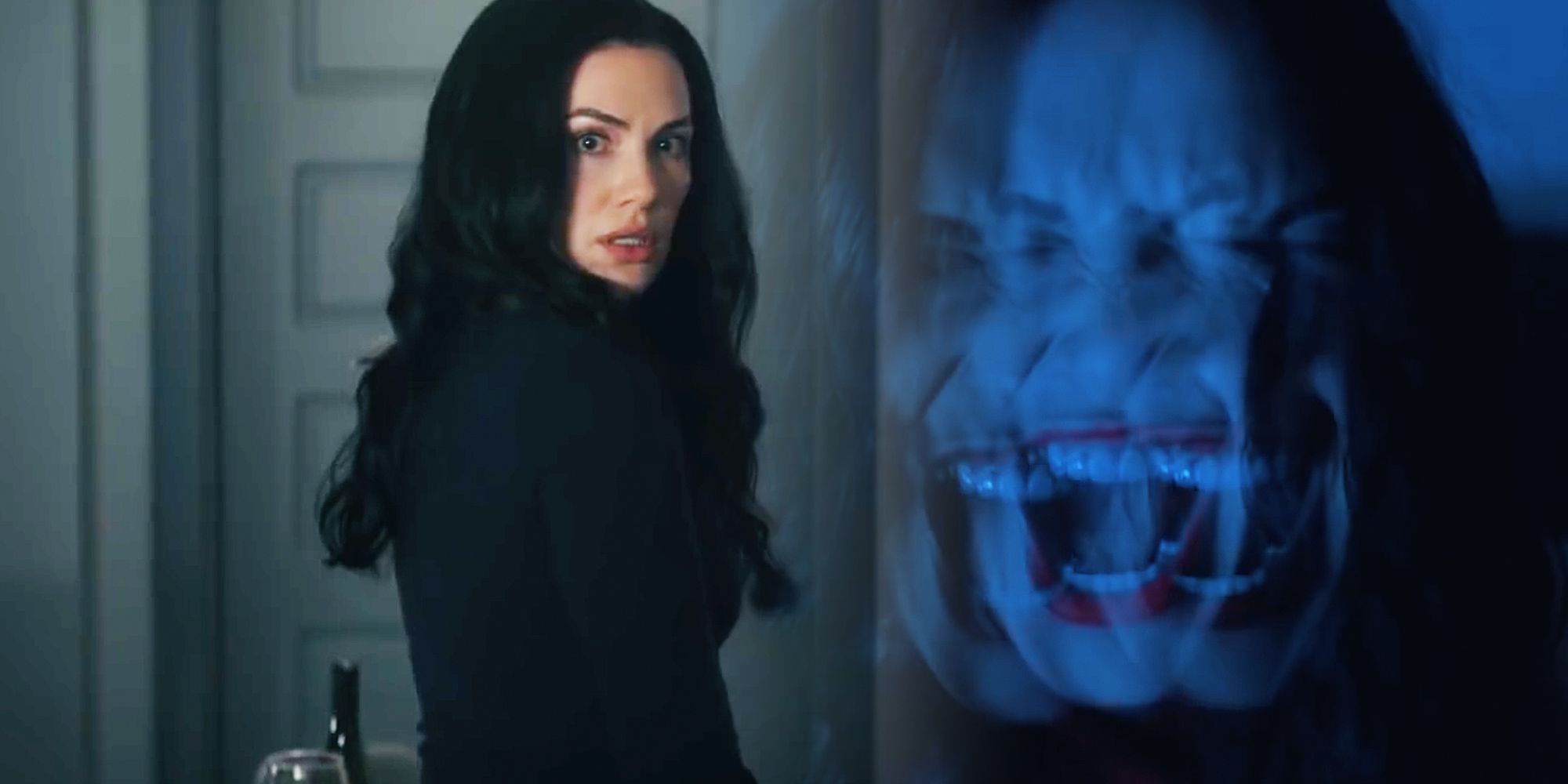 Netflix’s ‘Hypnotic’ is a psychological thriller about a woman who enlists the help of a hypnotherapist to overcome her fears. Soon enough, Jenn finds the therapy having strange and sinister effects on her that seem to be connected to a string of mysterious deaths. Suspicious of her doctor but unable to reveal his motive or methods, she desperately tries to fend off a feeling of impending doom even as she begins to realize she’s not in control of her mind.

So does Jenn eventually recover? Or does she also end up as just another unsolved death? And what’s going on with Dr. Meade anyway? The film and its breathless climax might have left you with some questions, so here’s the ending of ‘Hypnotic,’ explained. SPOILERS AHEAD.

The film opens in an office building late at night where a woman named Andrea Bowen tries to get in touch with a police officer as she leaves to go home. As she gets into the elevator, she gets a call from an unknown number that tells her that the world is going to end. Soon, the walls of the small enclosed space she is in begin to close in, and it is later revealed that Andrea dies of a heart attack.

We are then introduced to Jenn, who arrives at her friend Gina’s house for a party but is disappointed to learn that her estranged ex-fiance Brian is also there. At the party, Gina introduces Jenn to Dr. Meade with glowing reviews. She implores Jenn, who is currently unemployed and is having a difficult time getting over her breakup, to see him for a few sessions. Eventually, Jenn agrees and arrives at the doctor’s futuristic office. After some initial skepticism, she allows Dr. Meade to perform hypnotherapy on her and is shocked by how quickly time passes while she’s under.

We are then taken three months on, with Jenn now working at a new job. Over a meal with Gina, she talks about how her life seems to be getting back on track ever since she began to have the hypnosis sessions. At her next meeting, Dr. Meade tells Jenn to invite Brian over for dinner and talk to him to get some closure about their broken relationship.

Later, Jenn receives a call from an unknown number and blacks out on the way to the supermarket. When she comes around, she finds herself sitting at her dining table with Brian lying in the next room, seemingly poisoned. Jenn then realizes that she’s fed him sesame oil (despite knowing about his serious sesame allergy). She soon begins to suspect Dr. Meade and, along with Gina, approaches Detective Rollins, who has previously investigated the hypnotherapist.

Despite being suspicious of Dr. Meade, Rollins doesn’t have conclusive proof, and Jenn decides to take matters into her own hands. She visits the doctor for another session and records everything he says while she is hypnotized. When she later listens to the recording, Jenn realizes to her horror that Dr. Meade knows she’s recording him. Soon after, Gina is killed in a car accident, and Jenn begins to fear for her life.

From flashes of memory, our heroine is able to deduce where the doctor lives and heads to his house to once again attempt to get some incriminating evidence. Upon reaching, she is swiftly captured by Dr. Meade, who has embedded triggers into Jenn’s mind that allow him to control her. Realizing she’s in danger, Detective Rollins rushes to the house and intercepts the doctor. In the scuffle that follows, the detective is shot before Jenn finally turns the gun on Dr. Meade and shoots him. The film then closes a month later, with Jenn seen sitting at Brian’s bedside in the hospital.

The closing scene tells us that Jenn escapes from the clutches of the murderous doctor and survives the ordeal. She seems to be one of the lucky few as it is revealed Dr. Meade is responsible for the deaths of multiple patients before her. Though it is not revealed, from the way the hypnotherapist describes their last encounter (by saying how close she is to the end), it seems he planned on killing Jenn very soon. Therefore, she seems to have had a narrow escape.

Despite being rid of the doctor, it remains unknown whether Jenn is free of all the convoluted psychological triggers he placed in her mind. In an earlier scene, the kindly Dr. Stella is left shaken when she realizes just how deep the criminal doctor has gone into his patient’s mind. Therefore, there are likely some remnants of the doctor’s insidious mind-control therapy that still remain in Jenn’s mind and will either have to be purged or hopefully lay dormant. Unfortunately, only Dr. Meade knows what the embedded triggers actually are.

Who is Amy? Why Does Dr. Meade Hypnotize Jenn?

At one point, Dr. Meade opens up and reveals that his wife, Amy, who was the love of his life, died a few years ago. It is then revealed that the disturbed doctor hypnotizes patients that resemble his late wife and plays out his memories with them. Therefore, the flashes that Jenn gets of her and Dr. Meade together in bed are real “memories” of him trying to recreate his time with Amy.

The doctor claims that Jenn resembles his late wife more closely than any of his previous victims, making her special. He, therefore, waits till his anniversary (March 6) to play out his atrocious plan to abduct Jenn and pretend to have a romantic night with his wife using his hypnotized patient.

Who is Dr. Xavier Sullivan?

Dr. Meade describes the late Dr. Xavier Sullivan as a groundbreaking hypnotherapist and his mentor, who was apparently fond of saying that the barriers of the mind must be broken for effective treatment. When Jenn finds her sinister therapist living in Dr. Sullivan’s house, it is revealed that Dr. Meade is his son. This also explains how he got the sophisticated knowledge to hypnotize people and control them through mental triggers.

An online search by Jenn also reveals Dr. Sullivan worked for the CIA and was one of the doctors involved in the top-secret mind control program called MK-ULTRA. We also get a brief glimpse of a phrase that mentions “false memories,” which Dr. Meade earlier talks about during one of his sessions. Therefore, it becomes clear that the criminal doctor has learned some powerful mind control hypnosis techniques from his late father and is now putting them to criminal use.

Does Dr. Meade Die? What Happens to Detective Rollins?

In the end, Dr. Meade is shot multiple times by Jenn and falls into his chair. It is almost certain that he is dead, and in the off-chance that he survives, there is now enough evidence to keep the doctor in prison for many years.

Unfortunately, Detective Rollins is also shot in the process and is seen passing out on the floor of Dr. Meade’s house. The film’s closing scene, set a month later, reveals that the detective is alive and has been promoted, seemingly for his work in apprehending the insidious hypnotherapist.

Read More: Is Hypnotic Based on a True Story?