IMDb vs Rotten Tomatoes: Which Ratings Should You Trust? 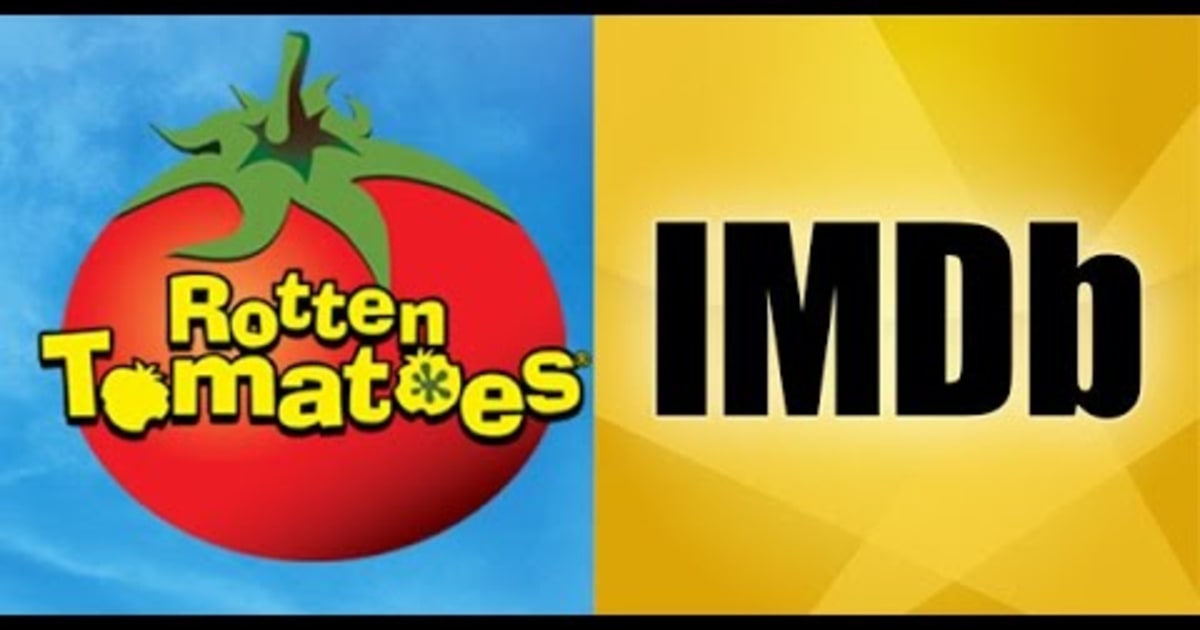 It has been age old debate among movie fans: which rating system should you trust more? IMDb or Rotten Tomatoes? While both the sites have their own devoted group of fan following, today I am going to take stance and try to argue in favor of IMDb. As with any constructive discussion, you are free to disagree, but before that hear out my argument. 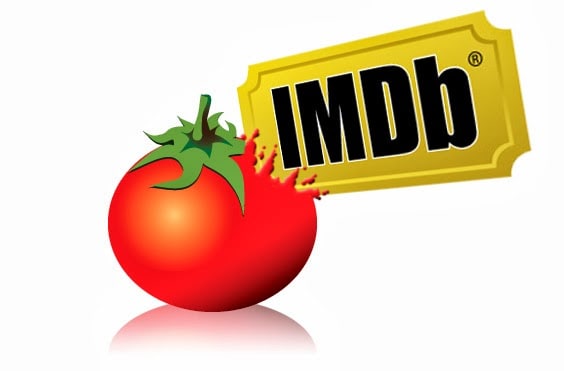 Let’s first begin by understanding how scores are awarded on IMDb as compared to Rotten Tomatoes. I’d assume that all of you know that IMDb is completely user-driven, ratings of all films depend solely on average users who just go the website and rate movies they’ve watched. Due to this fact, you’d expect there to be some really extreme ratings, especially from a person or a group of people who ‘hate’ a particular film for no reason whatsoever or just like to randomly give low ratings to films. IMDb is wise to this, however, and has introduced a weighted rating system for the movies in their top 250 list. I’m not going to bore you with the formula and the concept of the ‘Bayesian estimate’ they use to calculate their rating but let me simplify it for you. Not all votes by users on IMDb have the same weightage. Users who rate more films and generally rate a film closer to its average are given more preference in the ‘weighted average’ score IMDb calculates. This moderation method has proved successful for IMDb over the years.

Rotten Tomatoes is a critics-powered site. The opinion of the average cinema-goer is not taken into account. If the critics like the film, the film gets a fresh rating (above 60%) or else it is doomed to rot in the rotten category. This rating is a general average of the ratings from all the critics registered with the site. There are a few prerequisites to become a critic with Rotten Tomatoes, which include being a writer for a  major media organisation. Now I’m not going to rant about the bias of film critics or cook up conspiracy theories about critics being paid to give good reviews. I’ll simply ask you this, should the opinion of around 200 people be considered over the opinion of more than 1 million people? 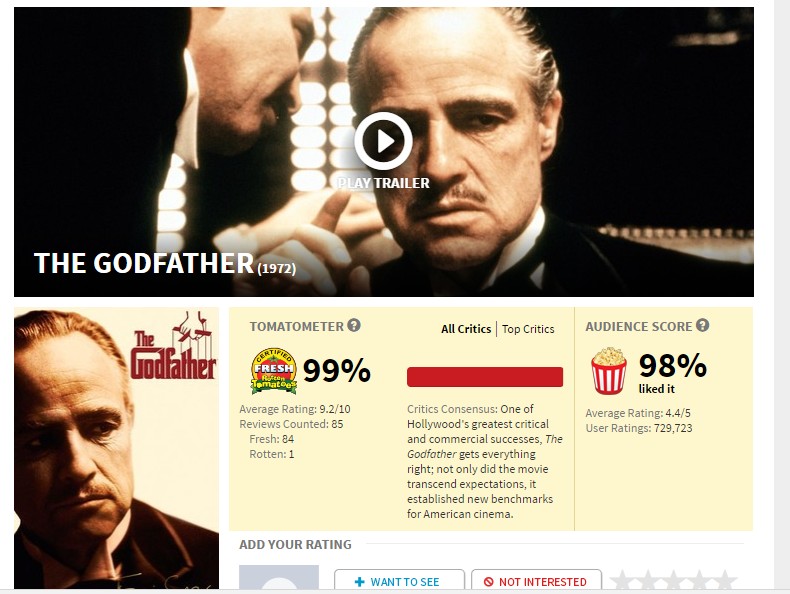 Now you may argue, ‘these 200 people have devoted their life to reviewing films, they make their living out of watching and rating new releases, shouldn’t we trust them more?’ This is definitely a valid point. Most of the films that we consider among the greatest of all-time usually receive very high scores on Rotten Tomatoes. Let’s take the example of ‘The Godfather’. With a 99% score on RT, this classic has definitely received the rating it deserved.

However, this article is written for the average cinema-goer. It’s written for you. Most of you don’t care about production design, editing or directing, as long as you’re delivered a brilliant film as a whole. You love a film like ‘Home Alone’, a timeless classic, a film you grew up watching, a film that had you rolling down the aisles with laughter, one of the few good Hollywood films that you could watch with your entire family. Also, a film which happens to be rated rotten at 55% on Rotten Tomatoes! Surprised? How could this be possible? This reinforces my point about how RT ratings do not cater to the average audience. 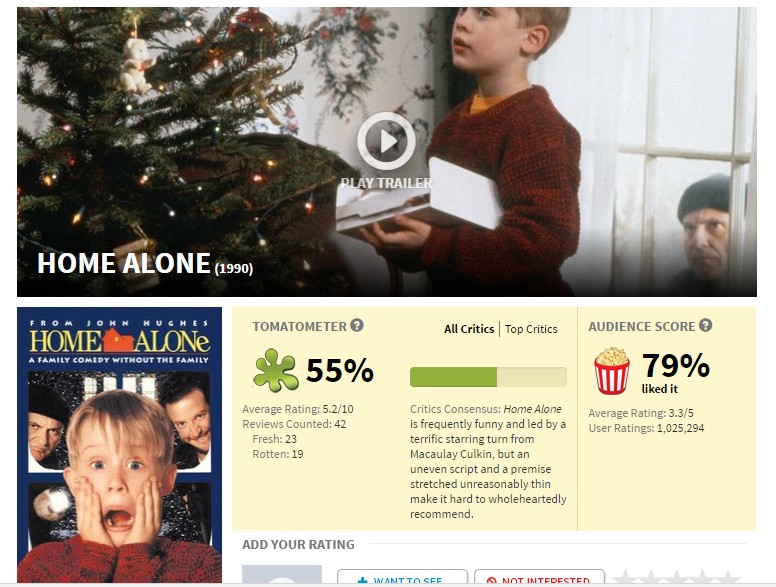 Before we delve into the subject deeper, let’s understand IMDb ratings more clearly. One of the disadvantages of IMDb ratings is that they have no clear ‘boundary line’ drawn between rotten and fresh unlike Rotten Tomatoes. So, here’s a simple system I’ve come up with after some careful research and calculation:

>9.0: Only 3 films exist above a 9 rating. ‘The Shawshank Redemption’, The Godfather’ and ‘The Godfather II’. I’d suppose no one will raise a voice if I were to count these among the best movies ever made.

8.0-9.0: The rest, i.e. 247 films, in the top 250 list on IMDb fall under this category. Only an elite category of movies receive a rating higher than 8 on IMDb and these films should be considered great (of course, there are exceptions as we point out here).

7.0-7.5: I’d say that 7 is some sort of invisible barrier for IMDb films, movies which cross this barrier are definitely worth at least one watch.

6.0-7.0: This is where things get a little tricky. Most of the films in this bracket are average. But there also many films that are actually great, but have been rated low due to odd reasons. (We handpicked some of these films here). Overall, you can certainly take a chance with films in this bracket. You could end up discovering an underrated gem.

4.0-6.0: Below average movies. Don’t watch any of dramas in this rating range if you value your time. Some comedies in this bracket, however are watchable. Watch at your own peril.

Now that we’ve cleared that up, let’s discuss another movie that Rotten Tomatoes completely got wrong. The curious case of ‘Sharknado’. The longest running ‘joke’ on Rotten Tomatoes happens to be rated fresh at 82% on RT. If you aren’t familiar with the film, give it one watch and you’ll know what I’m talking about. Were the critics who rated this film, which happens to be 3.3 on IMDb, acting under the influence of some dare? I mean, surely, no one in their right frame of mind, especially someone who watches movies for a living, can sit through the entire duration of ‘Sharknado’, let alone rate it as a great film? 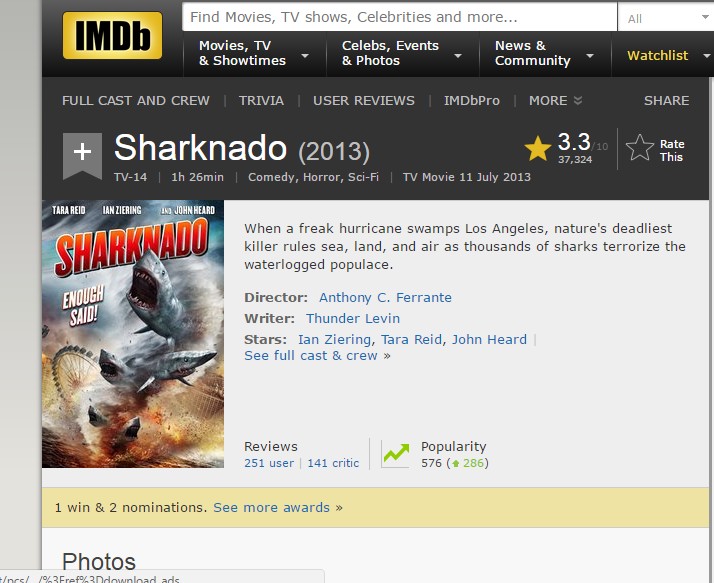 I agree, that if you look, you’ll find some movies that have average ratings (6.0-7.0) on IMDb but are actually pretty good films. In fact, with the number of movies made, it’s impossible to find quite a number of cases where IMDb got it wrong. Bear in mind, however, I do not claim that IMDb has some ‘perfect’ rating system. I am merely stating that IMDb ratings are more trustworthy than Rotten Tomatoes’ ratings.

Let’s compare the two to a real world model. We are familiar with the systems of government. If IMDb ratings were comparable to a system of government, they’d be a democracy. Rotten Tomatoes on the other hand, adopts a system of constitutional monarchy. These comparisons may sound ridiculous, but think about it. Quite simply, IMDb lets the common man vote. Rotten Tomatoes has an elite group of individuals voting for their ‘king’. I really would like a democratic system formed by a number of people with similar characteristics to myself to help me choose which movie to watch.

IMDb has added ‘Metascore’ (from the second most used review aggregating site similar to the Rotten Tomatoes). As a matter of fact, Rotten Tomatoes also has an added feature of a ‘audience score’. However, these sites do not give as much importance to these scores (No one spoke about the audience score for BvS!) as they do to their primary scores. The only thing which makes movies a box office success is how much the audience gets entertained. IMDb recognises this fact, by allowing this very audience to rate the film.

I’m on a quest to watch atleast 50% of all the movies made in history. Definitely an uphill task, but what makes it more difficult, is choosing which film to watch. I sometimes spend more time on IMDb and Rotten Tomatoes analysing summaries and comparing ratings just to decide which movie is going to be worth my time. Over the years, I’ve developed an algorithm to help me decide which film to watch.

For action films, I am a little bit more liberal, allowing a rating of above 5.5 on IMDb and above 35% on Rotten Tomatoes.

For pure comedies, I ignore ratings altogether and choose based on the story line or the cast. I’ve come to realise that when it comes to comedy, the entire audience acts like a film critic and doesn’t rate films based on entertainment factor. The same is true for horror films. For some strange reason, they are rated low on IMDb — even though we know that horror is amongst the most popular genre of films.

So, the next time when you’re on RT, trying to decide between two movies, please do take a look at their IMDb ratings too. They say a lot more about how much you will like the film.