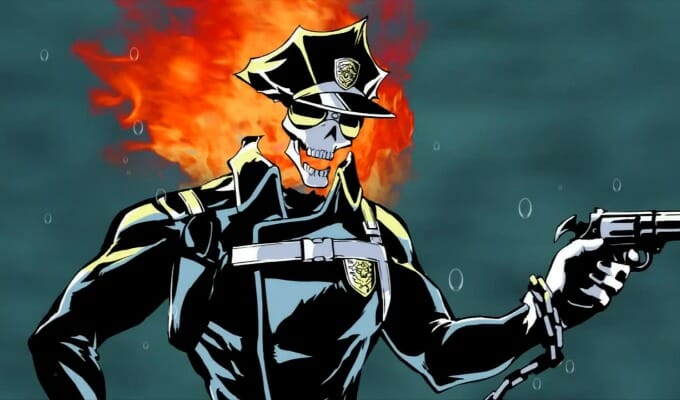 Inferno Cop (also known as Inferuno Koppu in Japanese) is an original net animation (ONA) action anime series produced by animation studios Trigger and CoMix Wave. Written by Hiromi Wakabayashi and directed by Akira Amemiya and Hiroyuki Imaishi, Season 1 of the show premiered on December 25, 2012. It was received favourably in Japan and was regarded as being among the better action anime shows in the country. With fans of the show all clamouring for a second season, Trigger announced in 2017 that it would indeed be making a second season. Season 2, however, is yet to premiere and here’s everything we know about it thus far.

Inferno Cop Season 2 Release Date: When will it premiere?

Years later, after repeated demands by fans for a second season, Trigger, at the New Jersey AnimeNEXT, announced on June 9, 2017 that it would be making a second season of the show. As it stands, it’s known that Season 2 of Inferno Cop will also be an ONA. However, Inferno Cop Season 2 release date has not been specified yet and it remains to be seen when it is released.

Considering the fact that the renewal announcement came in mid-2017, one would have expected Season 2 to have been released by now. However, it appears that there is some delay which is preventing Trigger from releasing the new season. Our best guess is that  Inferno Cop Season 2 could release sometime in 2021.

You can watch ‘Inferno Cop’ on Crunchyroll with its original Japanese audio and English subtitles.

In its visual style, theme, and its depiction of its protagonist, Inferno Cop, to a slight extent, resembles Marvel Comics’ Ghost Rider character.

The show is set in the fictional Jack Knife Edge Town and revolves around the titular protagonist, Inferno Cop, and his adventures as a supernatural law enforcement officer meting out justice in a fiery streak of vengeance. The show starts off after Inferno Cop’s entire family is murdered by the Southern Cross, an Illuminati-like secret organization which seeks to control the world using the innumerable thugs and fearsome monsters under its control. Following this tragedy, Inferno Cop unleashes his wrath on the lawbreakers in his town, dispensing ruthless justice by either blowing criminals up or shooting and killing them.

However, Inferno Cop’s adventures are far from what one would consider normal in the world of law enforcement. Over the course of the show, Inferno Cop undertakes bizarre assignments, some of which include fending off a zombie apocalypse, travelling through time, fighting a sinister newborn baby, and killing a mummy. With bizarre adventures always abound, the show follows Inferno Cop and his adventures in and around his town.

Owing to the episodic nature of Inferno Cop, the show has a long list of characters who appear in its many episodes. However, only a handful of recurring characters apart from the protagonist are important. Below, we’ve provided you with brief backgrounds on each of the main characters in the show.

Inferno Cop: The titular protagonist of the show, Inferno Cop, much like Ghost Rider, is a cop with a flaming skull. Being no ordinary police officer, Inferno Cop’s choice of transport is also a rather unorthodox one and he drives a flaming cop cruiser. As far as Inferno Cop’s weaponry is concerned, he carries an exceptionally powerful revolver which blows up pretty much anything it shoots. Inferno Cop’s streak of vengeance starts off after his entire family is murdered by the evil Southern Cross organization. In the show, it’s also implied that Inferno Cop himself was killed by the Southern Cross before he took on his fiery form. As a law enforcement official, Inferno Cop stands out from the rest of the police officers in Jack Knife Edge Town – while police officers are willing to let criminals walk away if they have “paid their taxes”, Inferno Cop is a brutal manifestation of justice who eliminates all lawbreakers who have the misfortune of crossing paths with him.

Mecha Cop: An important character for the most part of the show, Mecha Cop is a hulking robot armed with chain gatling guns created by the Southern Cross for one purpose only – to eliminate the threat posed to them by Inferno Cop. However, in spite of being armed with superior technology, Mecha Cop fails to achieve his objective and later in the show, is forced to work with Inferno Cop when they find themselves transported through time to the past. Even later, Inferno Cop and Mecha Cop find themselves in the depths of Hell and again have to cooperate if they wish to survive. Finally, when Inferno Cop locates the exit of Hell and is about to leave, Mecha Cop decides to stay behind to help the residents of Hell.