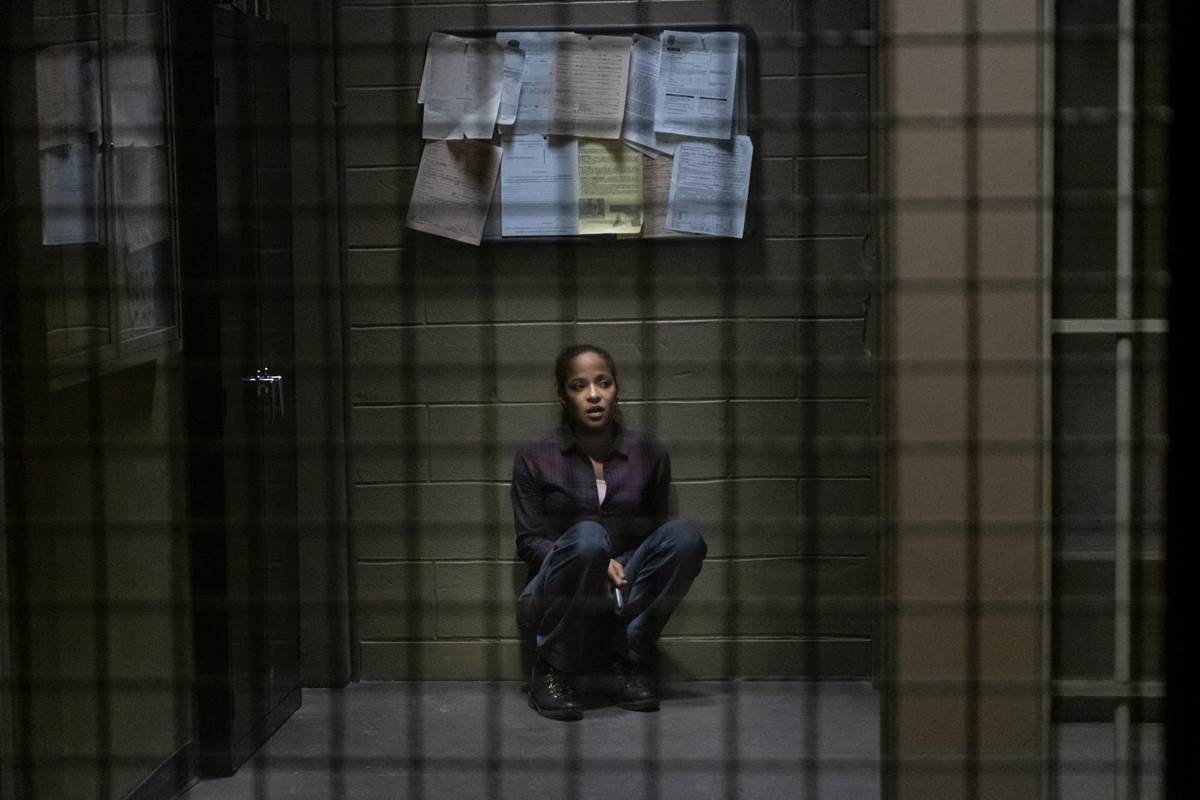 ‘Into the Dark: Blood Moon’ is a fantasy horror movie directed by Emma Tammi and is the final installment of streaming platform Hulu’s horror anthology series, ‘Into the Dark.’ The film follows Esme and her son, Luna, who is afflicted by violent transformations every full moon, which make him a danger to everyone around him. The film has a common enough premise but it has a twist that grounds its audacious claims and makes it more believable.

The final installment of the second season of ‘Into the Dark’ explores not escaping from werewolves but possibly coexisting with them. It has an ending as open-ended as the road we see Esme and Luna disappear on in the closing frames. Let’s see if we can find some answers hidden inside the ending of ‘Into the Dark: Blood Moon.’

Into the Dark: Blood Moon Recap

‘Into the Dark: Blood Moon’ opens with Esme, gun in hand, having just killed Luna’s father. Though injured, she runs to the sound of Luna crying, and we see that she keeps him in a heavily armored box. The story then moves to a few years later, where Luna seems to be around 10, and he and his mother Esme have just moved to a new town. Esme looks for a new house for them to live in, stressing that it must have a basement. As soon as she finds a suitable house, she heads to the hardware store and purchases heavy metal bars and the tools to use with them. 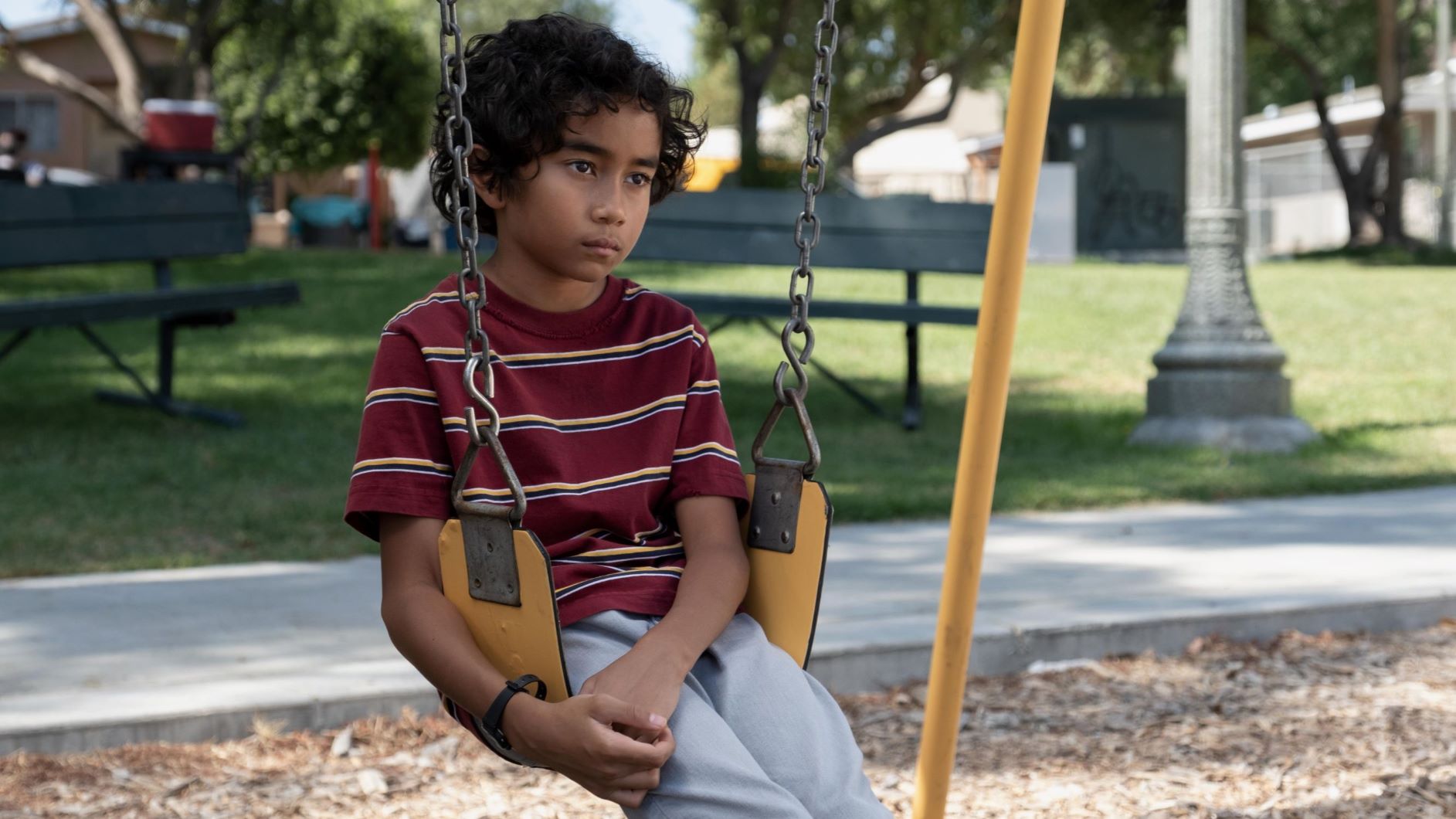 It becomes clear soon enough that her son Luna transforms into a bloodthirsty creature every full moon. We see the calendar highlighting the full moon night and Esme secretly killing a cow and bringing the meat home, which she places in the cage she has constructed in the basement. We then see Luna willingly go into the cage, and soon enough, his ears begin to elongate as he slowly turns into a wolf. The whole night that Luna is transformed, Esme sits outside on the porch with a tranquilizer gun in her hand.

The next morning, Luna is back to normal, albeit feeling a little sick. We later find out that this is because of a piece of bone lodged in his gums. Things go smoothly enough for the next few months, with a few close calls. Esme is very cautious about keeping Luna isolated and doesn’t let him attend school or even birthday parties, which frustrates Luna, who exclaims that he just wants to be a kid. We also see Esme and Luna forming a bond with Miguel, the hardware store owner. On the day of the full moon in November, however, things get out of hand.

Into the Dark: Blood Moon Ending: What Will Happen to Esme and Luna Now?

On the day of the full moon in November, Esme prepares the cage and meat for Luna’s transformation. The meat is old and gives off a strong smell, and Luna complains that it is not fresh enough, to which Esme retorts that it is too risky to go out and kill cows for fear of being discovered. The two decide to take an afternoon nap before the transformation, but while Esme is still asleep, Sam, her boss from the bar she works at, shows up. 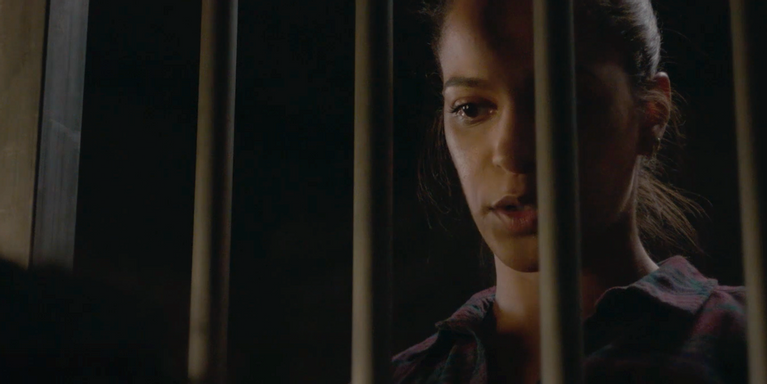 Upon entering the house, Sam smells the rotting meat and tries to locate the source of the smell. Despite Luna’s protests, he goes into the basement and discovers the heinous setup down there. Meanwhile, Esme, having woken up and not realizing that the intruder is Sam, hits him with her gun, and Sam falls down the stairs. It is not clear if he is dead or not, but she does hide his car.

That evening, just as she locks Luna into the cage, Sheriff Barlow and his deputy show up asking whether she knows of Sam’s whereabouts. The deputy soon becomes suspicious of Esme and discovers the cage in the basement with Luna locked inside. The two are then taken to the police station, where the Sheriff begins to question Esme while his deputy talks to Luna. Not heeding Esme’s pleas to lock Luna up before he turns dangerous, the Sheriff informs her that she is wanted in 7 states and that the FBI will come and take her in the morning.

Meanwhile, Luna transforms into a wolf and attacks the deputy. The Sheriff goes to save his deputy, and Esme hears gunshots and growls. Soon enough, all the policemen are dead, and Luna (the wolf) walks towards Esme as she points a gun at him, not wanting to shoot her son. As he gets closer, she realizes that he is not going to attack her, and she runs her hand through his blood-soaked fur.

She then calls Miguel to come and pick them up, as he’s the only one that she can trust. Miguel looks on in shock as she calls out to a transformed Luna, who calmly gets into the back of his truck. Miguel reassures her that he will not tell the FBI what happened and adds as an afterthought that even if he did, they would not believe him. We then see Esme and Luna driving away, looking for a new town to call home.

Since we heard the Sheriff say that Esme is wanted in 7 states, we know that she and Luna have moved multiple times. Esme’s efficiency at setting up the cage for Luna further stresses that they are used to this situation. However, we can see that Luna is getting frustrated at having to move homes so often and wants to attend school. Also, Esme definitely realizes that with the trail of blood they’re leaving in their wake, it’s only a matter of time before they are caught.

Esme and Luna seem to be on the hunt (no pun intended) for normalcy, especially Luna, who just wants to be a regular kid. They have what can almost be called a “routine” for dealing with Luna’s transformations, and for the rest of the time, they try to live like a regular (albeit cautious) family. We can expect that after the events in this town, Esme will take them to another town far enough that news from this town will not reach it, and they will try to re-establish a life for themselves. However, a few things have now fundamentally changed for Esme and Luna, and they also seem to have a friend, Miguel, who knows their secret and is willing to help them.

How Did the Events at the Police Station Change Things?

Esme has an enormous realization during Luna’s transformation at the police station in the movie’s climax. Despite him brutally murdering the rest of the policemen, he does not attack Esme. This is something that fundamentally changes the relationship between Luna and Esme, as in the past, we have seen that she did not know how Luna (or his father) would treat her when they transformed. Now, she knows that Luna will not attack her. 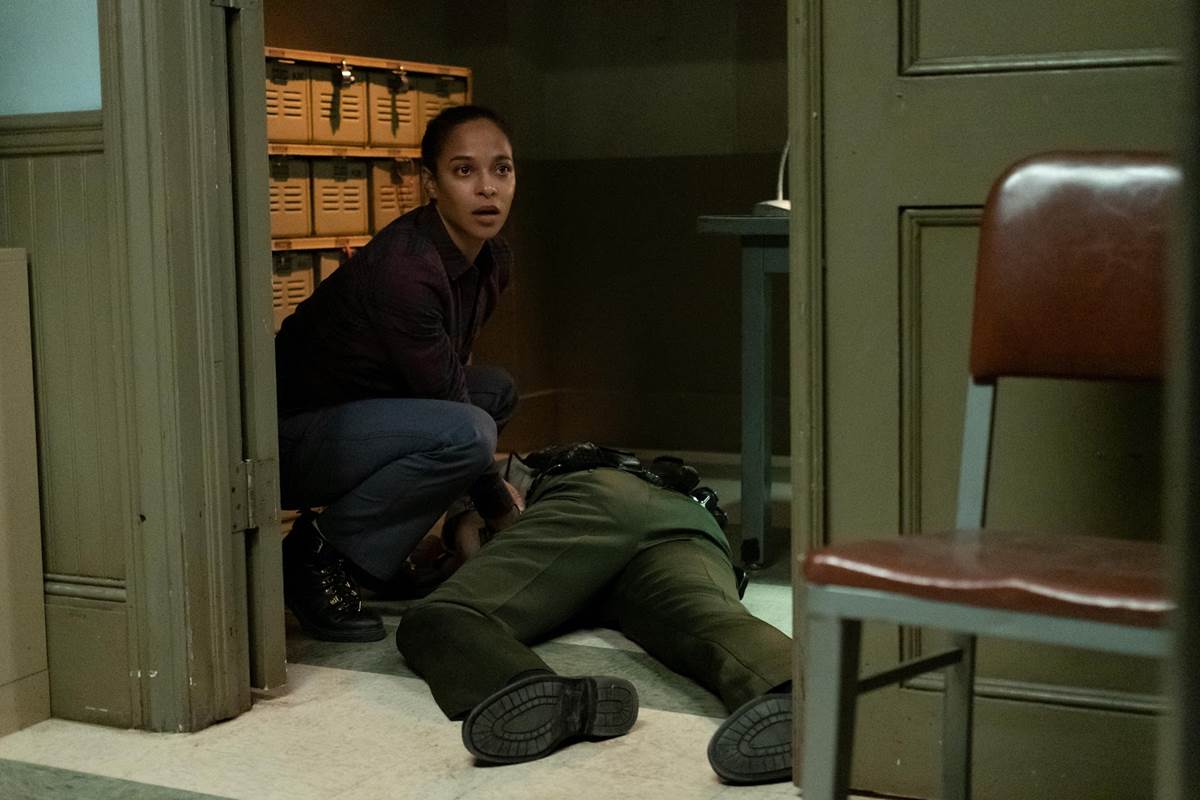 We even see Luna show what might be affection and obedience towards Esme near the end of the film, when she runs her hand through his fur, and then when he obediently walks into Miguel’s truck when she gestures to it. This means that from here on, Luna’s transformations might be a lot less stressful for Esme, as she now knows that as long as Luna gets fed, he will be relatively docile towards her. This promises to help greatly in their quest for normalcy and keeping Luna’s “condition” a secret from those around him.

Why Does Luna Not Attack Esme?

The movie opens with Esme having been attacked by, and subsequently killing, Luna’s werewolf father. We see that at the time, despite Luna being a baby, she still keeps him locked in a heavy-duty box. This might be for Luna’s own protection from his father, but also because Esme is scared that Luna, like his father, might attack her.

Later on, Esme says that she knows that Luna will not “intentionally” harm her, which tells us that she still does not know what might happen if she comes in contact with Luna while he is transformed. However, when that finally does happen in the climax, Luna does not attack her. There are two reasons why Luna does not attack Esme. The first is because she is his biological mother.

He possibly feels some form of connection to her even in his transformed state, a connection that he doesn’t feel with anyone else, which stops him from attacking her. Secondly, it is possible that his father’s blindly violent werewolf tendencies are not as strong in Luna since he is also half-human from Esme’s side. This could mean that Luna has more control over his violent tendencies than his father did and can (sometimes) choose not to attack.

It seems that Luna is wild and uncontrollable right after he transforms, possibly because of his bloodlust. We see this when he transforms whilst in the car and is not docile towards Esme at all. However, once his bloodlust is quenched, as we see in the police station after he has killed all those policemen, he seems to be more docile and “in control,” which is why he doesn’t attack Esme and calmly climbs into Miguel’s truck. This new dynamic between Esme and Luna promises to be a huge step forward in the two of them co-existing and possibly finding some form of stability in the future.