Is And Tomorrow The Entire World Based On A True Story? 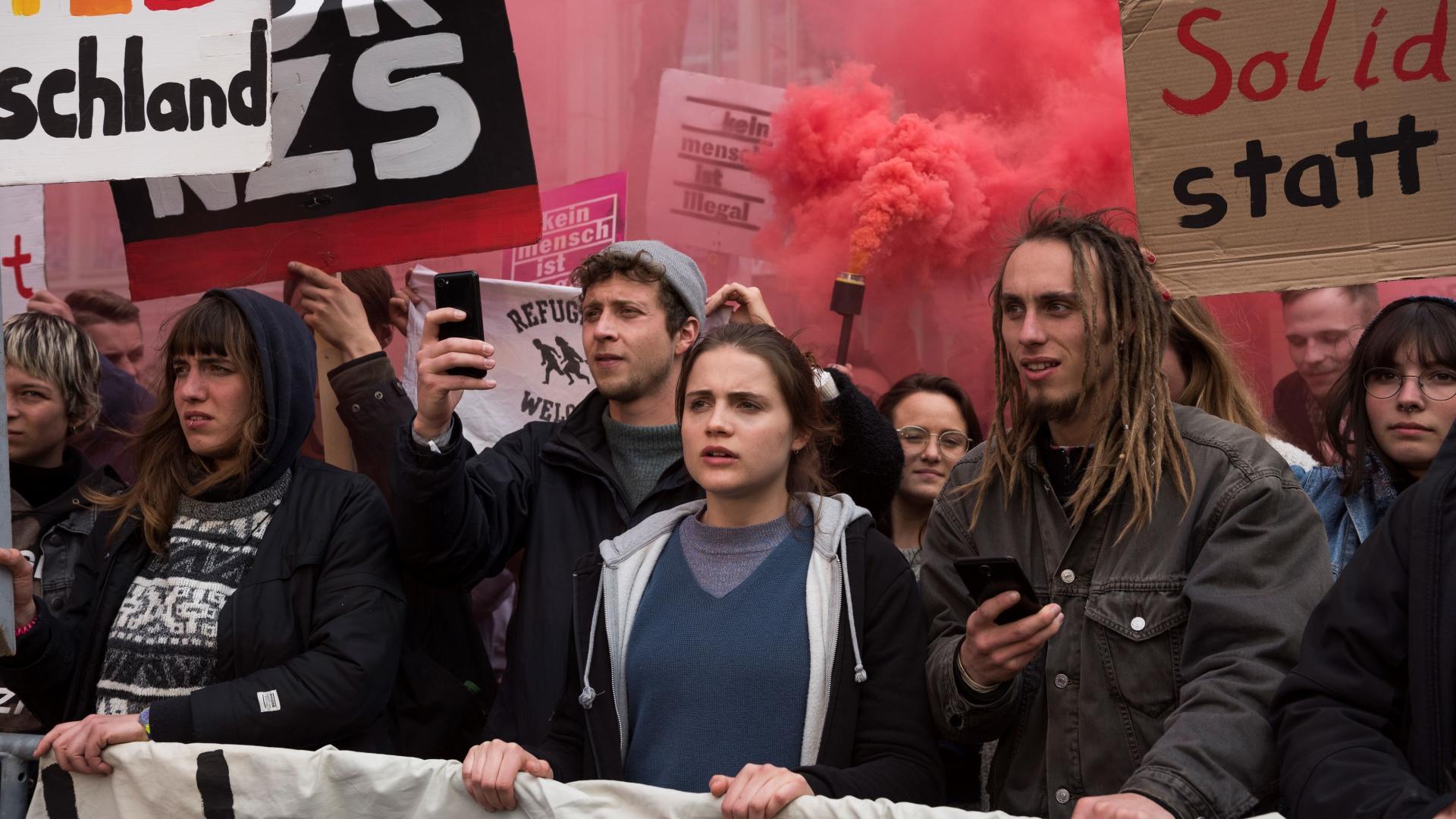 Helmed by young auteur Julia von Heinz, ‘And Tomorrow the Entire World’ (German: ‘Und Morgen Die Ganze Welt’) is a political thriller set in a politically polarized landscape of modern-day Germany, but the timely scope of the film transcends it beyond the national border and endows it with universal significance. Revolving around the student-led political organization P81, the film takes the viewer to a realm of suspicion and mistrust, as it unearths a country segregated by diverse sentiments. While the rebels strive to overthrow the established order, the effort and struggle get muddled in rivalries among their own group.

However, the central protagonist Luisa (through whom the narrative of intrigue unfolds), conceals within her a contradiction and suspicion that characterizes the directorial vision. The deranged state of affairs is not enough to put her off, and in the finality of events, the struggle within Luisa subsides and gives way to a breath of fresh air. The film was praised by the critics for brilliant acting on the part of the young actors and the nuanced story that maintains objective handling of its relevant theme.

However, the film may read like propaganda and polarize the viewers to an extent, especially if they are prejudiced towards one political leaning or the other. If you are made to question the credibility of the story and its resemblance to reality, let us investigate how much of the film is actually tethered to real-life incidents.

Is And Tomorrow the Entire World Based On A True Story?

‘And Tomorrow the Entire World’ is partially based on a true story. The German contender at 93rd Academy Awards, we are told, is a fictionalized account of the real-life experiences of writer-director Julia von Heinz, who became involved with an organization similar to the P81 in her days as a student. The script for the film was written collaboratively by John Quester and Julia von Heinz.

The film was decidedly meant for the politically polarized German audience, but a happy accident made the film relevant in the context of global politics. Owing to the nuanced vision of the director, however, maybe it was not an accident after all. Taking its name from Hitler’s threat to the world, the film itself speaks volumes about the care and insight with which the director approached the story.

Coming from the mouth of the director herself, the development of the film was a deeply personal endeavor for the director. The film is partially based on her own experiences in the politically turbulent Germany of the 1990s. The 1990s was indeed a troubled time for the nation, owing to the rise of right-wing extremist Neo-Nazis in the national political landscape. However, the film compresses the experiences of the director in a manageable duration of 111 minutes.

The director divulged that while the protagonist Luisa is seen to be going through her ideological transformation in a relatively short span of time, the incidents actually reflect a decade in the life of the director. For Julia, the intense period of transformation began from the early age of 15 and went on till 25. The director recounted the 1990s, which was a period marked by racial and ethnic hatred, right-wing ambushes, hate killings, but the situation subsided with the rise to prominence of a welfare democracy in the fin de siècle.

For the rational left, this time was marked by peace, trust, and hope that things would change for the better. But that was not the case. 2013 marked the establishment of the far-right political party Alternative for Germany, and they secured entry to mainstream politics in 2017. The anti-immigrant sentiments were dormant in the hearts of German ethnic nationalists, which saw the light of the day as the party gained media support by becoming increasingly vocal about their far-right agendas.

While the director initially thought to set the narrative in the 90s, disturbed by the resurgence of Neo-Nazis, she reformulated the story to set it in contemporary times. The fictional right-wing party “Liste 14” of the film is apparently modeled upon the real-life political party Alternative for Germany. All things considered, the realism of the film is adequately substantiated by the real-life events unfolding in the turbulent political climate of Germany.

However, if you are asking whether or not “Antifas” is a terrorist organization, they are not. They are more of a network of resistance spread throughout the world rather than a consolidated organization. Although their ways are obviously destructive, they seem more like a group of directionless teenagers at war with the state than gruesome and organized terrorists plotting for a coup.