Is Mike Holmes Married? Who is His Wife? 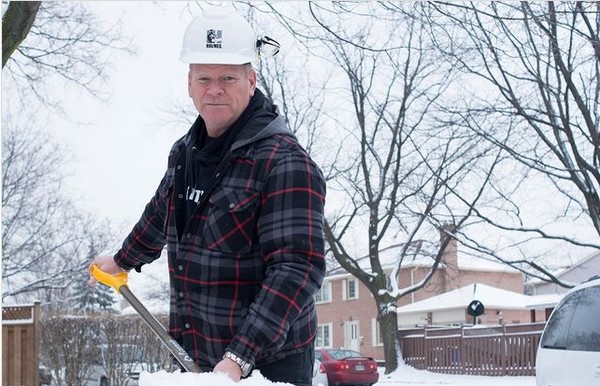 Mike Holmes is the person to turn to if unsatisfactory and shoddy work has been done on your home by contractors. In his show ‘Holmes On Holmes’ Mike visits homeowners who have been facing problems due to careless and substandard construction work. After being briefed by the homeowners, Mike investigates himself and starts correcting what the previous contractor has left behind.

In the process of rescuing the building, Mike and his crew are often required to rebuild entire houses from scratch. This fantastic contractor, businessman, and philanthropist has been a much-loved TV personality for almost two decades. Naturally, fans are eager to know the nitty-gritty of the contractor’s life away from the TV screen. Well, here is everything we found out!

Born on August 3, 1963, to Jim Holmes and Shirley Holmes, Mike is a native of Toronto, Ontario. He grew up alongside a younger brother and an older sister. Fascinated and curious about how things work, Mike’s childhood inspiration was his father. Jim Holmes, a plumber and an engineer with General Motors, was the one who irked Mike’s interest in the construction business. At six years of age, Mike was already showing brilliance as he helped rewire the entirety of their home’s second floor.

At just 19 years of age, Mike Holmes married Alexandra Lorex in 1982. Only two years later, in 1984, they welcomed their first child Amanda Holmes. The former couple had a happy married life. In a few short years, Mike’s family grew again when he and Alexandra gave birth to his middle daughter Sherry and his younger son, Mike Jr. Mike was a successful businessman and a father of three by the time he was 25.

At just 19 years of age, Mike Holmes married his childhood sweetheart Alexandra Lorex in 1982. Only a few years later, they welcomed their first child, a beautiful daughter Amanda. The couple had a happy married life, and in a few short years, Mike’s family grew again when he and his ex-wife gave birth to a daughter and son. Mike was a successful businessman and a father of three by the time he was 25.

In the 1990s, the recession hit the economy hard. It significantly affected Mike’s business and nearly wiped out his whole construction company. Mike went bankrupt and was forced to let his employees go after selling his business. This dire financial situation put a strain on Mike’s family, and his relationship with his wife suffered. Soon after, Alexandra and Mike divorced after around ten years of marriage. During this time, Mike also faced personal losses in the form of his parents’ untimely death.

Anna Zappia came into Mike’s life soon after his business, and his personal life was left in ruins. She supported him in rebuilding his construction empire and encouraged him to get into television when offered the chance. Anna has since stuck by Mike’s side, and the two share a beautiful and lovely relationship.

Even though it is unsure whether they have exchanged their marriage-vows, reports suggest that the couple has secretly tied the knot. Moreover, Mike describes Anna as his wife, and has also often said that Anna is the perfect partner.

Mike has three children from his marriage with Alexandra Lorex. Even after his divorce, Mike has maintained a loving and wonderful relationship with his children – Amanda Holmes, Sherry Holmes, and Michael Holmes Jr. All three of his children love helping their father in his work, even though Amanda prefers to remain behind the scenes. Sherry and Mike Jr. regularly feature on Mike’s shows.

The eldest daughter Amanda, who was born in 1984, i.e., just two years after Mike and Alexandra got married, chooses to live a private life and has reportedly married twice. Her first marriage was to a co-worker, Adam Belanger, which ended in divorce for unknown reasons. Presently she is married to a man whose identity is as of yet unknown. She is also a mother to two beautiful children, Wyatt and Emily. Amanda also made a few appearances alongside her father on his reality shows before departing to pursue other ventures. However, she continues working in the family business.

Mike’s other daughter, Sherry, is also happily married to her husband, Blake Steed. They got engaged in 2017 and share a beautiful daughter, Cali Kay Holmes Steed. According to Mike Jr., Sherry was never interested in her father’s work and instead wanted to make enough money to travel. However, in 2008, she joined her family’s collaborative project with Brad Pitt’s Make It Right Foundation and has since been pushing her limits in an experience she describes as “phenomenal.”

Mike’s only son and youngest child, Michael “Mike” Jr., is following in his father’s footsteps. Even though Mike Jr. never had any interest in construction, he fell in love with it after taking up a summer job with his dad. In 2017, Mike got married to Lisa Grant in a beautiful fairytale ceremony. He describes his dad as a perfectionist and says that the best advice he received from his father was to treat others the way you want them to treat you.

Read More: Who is Michelle Oakley’s Husband? Does She Have Kids?