Is Swallow a True Story? Is Pica a Real Medical Condition?

Director Carlo Mirabella-Davis’ psychological thriller movie ‘Swallow’ is a gripping tale of a woman’s journey to reclaim control of her life. It centers on Hunter, a housewife in an unhappy marriage who develops a habit of swallowing inconsumable objects. The movie stars Haley Bennett, Austin Stowell, Elizabeth Marvel, David Rasche, and Denis O’Hare in the lead roles.

The visually stunning female-centric film accurately portrays the tribulations of a woman who does not fit societal norms. Hunter’s emotional predicaments are hyphenated by a medical condition that complicates her life. However, is Hunter’s story and medical condition inspired by real events? We got curious and decided to get to the bottom of this question. Here’s everything we learned in that regard.

Is Swallow a True Story?

‘Swallow’ is partially based on a true story. Carlo Mirabella-Davis, the writer-director of the movie, sought inspiration from the life of his grandmother. In an interview with Syfy. Mirabella-Davis said, “I was inspired by my grandmother, who was a homemaker in the 1950s, who had various different rituals of control. She was in an unhappy marriage, and she developed obsessive hand-washing (as a compulsion).” 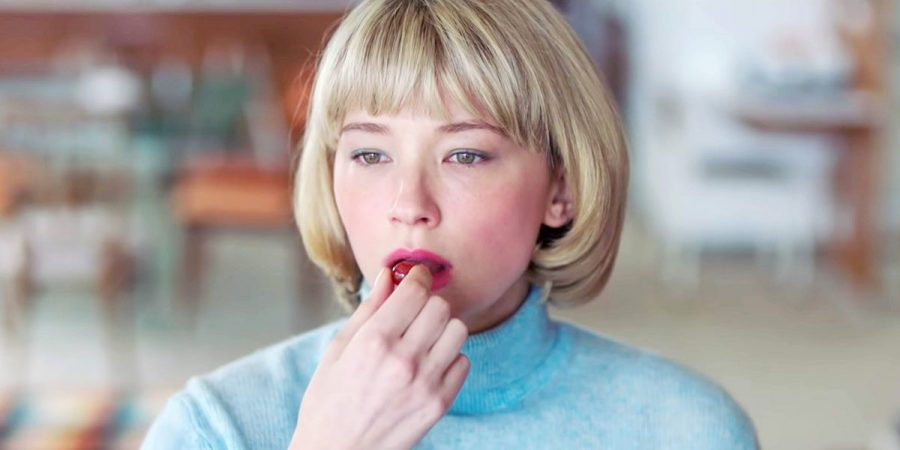 Mirabella-Davis’ grandmother, Edith, likely developed these habits to seek control in her otherwise unstable life, explained the director. Mirabella-Davis further added that Edith also had a mental illness and was institutionalized by his grandfather. He also noted that dealing with mental illness patients was drastically different during the era (the 1950s) and could be counterproductive.

“I always thought that it was very punitive — that she was being punished for not living up to society’s expectations of what they felt a wife or a mother should be. I wanted to make a movie about that,” Mirabella-Davis said, elaborating on the inspiration.

“It’s a quiet rebellion against a patriarchal system; it has something to do with this dark secret in her past. When someone is dealing with compulsion, there are a lot of factors that contribute,” Mirabella-Davis told Daily Freeman. These factors that the director alludes to (including the tragic backstory of her birth) are significant elements of Hunter’s story and help add a distinctive value to the movie without uprooting its sense of realism. It is safe to say that a large part of Hunter’s character arc and story are works of fiction.

Is Pica a Real Medical Condition?

Yes, pica is a real medical condition. It is a psychological disorder that can be described as a need or compulsion to consume non-nutritive items. Based on the types of things a person consumes, there can be various subcategories of pica such as acuphagia (sharp objects), Hyalophagia (glass), Metallophagia (metal), etc. Pica is commonly seen in children and people living with mental illness or, in some cases, physical disabilities. It is also common in pregnant women. The condition can also be caused by mineral or nutrient deficiencies. Treatment of the condition differs from case to case, and behavioral treatment is required in some cases. You can learn more about pica here.

Mirabella-Davis has said that he became intrigued with the condition after seeing a photo of all the objects from a person’s intestine laid out on a table. His curiosity led him to develop the story around the condition, and he took the help of a pica expert to craft a realistic on-screen depiction of pica. “I became curious what drew them to those artifacts, it was almost like a mystical experience like a holy communion, and I wanted to know more,” he said. The director has indeed succeeded in creating a realistic portrayal of the medical condition that elevates the movie’s unique and engaging story, which revolves around relatable themes.