Is Tacoma FD on Netflix, Hulu, or Prime? 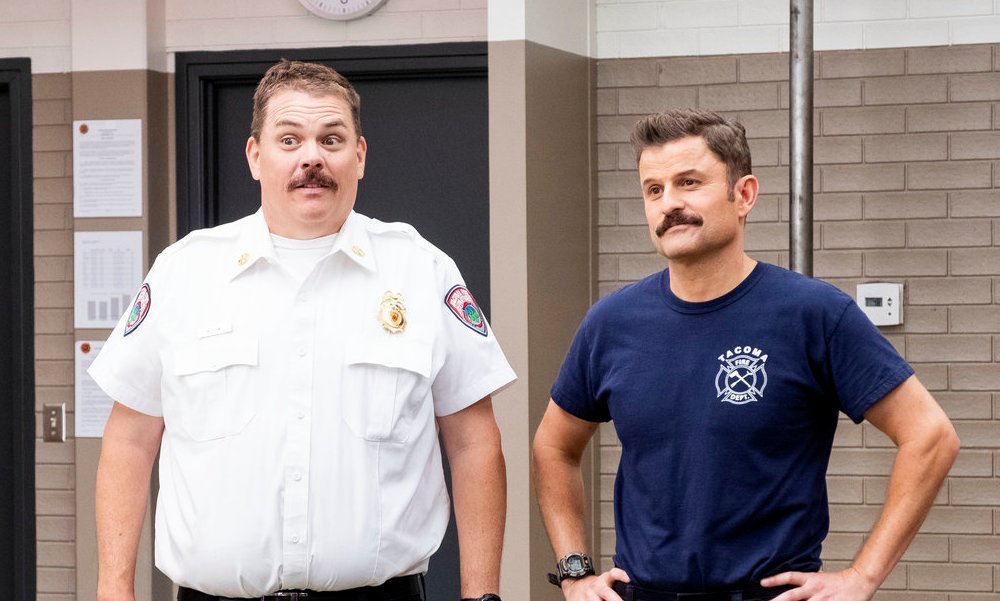 Featuring Kevin Heffernan, Steve Lemme, Eugene Cordero, Marcus Henderson, and Hassie Harrison, ‘Tacoma FD’ is a comedy series that primarily focuses on the hilarious misadventures of a group of firefighters who live in one of the rainiest cities in America. The show explores their everyday lives as they deal with a lack of inspiring work while navigating their lives through unexpected challenges on both personal and professional fronts.

The series is created by Kevin Heffernan and Steve Lemme, who also star in the scripted show as Chief Terry McConky and Captain Eddie Penisi, respectively. If you are looking for a half-hour of non-stop entertainment, then you must not miss out on ‘Tacoma FD.’ So, here’s everything you need to know about the comedy series and where you can watch it.

What is Tacoma FD About?

Located on the banks of Puget Sound, Tacoma is a mid-sized urban port city that receives high rainfall. Unfortunately, because of that, the crew at the Tacoma Fire Department, led by Captain Eddie Penisi and Chief Terry McConky, don’t really have much to do. So, to keep themselves preoccupied, the eccentric team of firefighters indulges in hilarious and creative competitions. The friendly rivalries not only kill boredom but also keeps the officers on their toes as they try to outperform their peers, who are just as competitive as them.

When they are not busy with their firehouse shenanigans, these brave men usually handle far less serious and less-glamorous tasks that do not match their job description. If you too wish to be a part of their topsy-turvy world and join them in their comical and absurd misadventures, then you have come to the right place. Here’s all the information you are going to need regarding how you can watch the series.

Is Tacoma FD on Netflix?

Netflix has some really good comedy-drama shows that you may like to watch, but ‘Tacoma FD’ is unfortunately not accessible on the streaming platform. People with a subscription can instead watch ‘Country Comfort‘ or ‘Paradise PD.’

Is Tacoma FD on Hulu?

‘Tacoma FD’ is available for live streaming on Hulu+Live TV. However, people with a basic subscription will have to look for other streaming options to watch the comedy series. But they can alternatively stream ‘Superstore‘ or ‘Brooklyn Nine-Nine‘ on Hulu.

Is Tacoma FD on Amazon Prime?

Amazon Prime does not include ‘Tacoma FD’ in its regular catalog of television shows and movies. But you can purchase your favorite episodes of the show right here. Each episode is available for $2.99, while one can also buy an entire season at a discounted price of $19.99.

Is Tacoma FD on HBO Max?

HBO Max subscribers who are looking for the series on the platform are in luck since ‘Tacoma FD’ is available on the streaming service. People who have a subscription can watch the first two seasons of the show here. However, you might have to check for the availability of the third installment at a later date.

Where to Watch Tacoma FD Online?

Since ‘Tacoma FD’  is a truTV show, it is accessible for streaming on truTV’s official website. Fans who wish to watch the series live can head to SlingTV and YouTubeTV. Platforms such as DirecTV, Spectrum, and Xfinity also have the series in their catalogs. Those who wish to watch the show at their convenience can use VOD services such as iTunes, Microsoft Store, Google Play, YouTube, and Vudu.

How to Stream Tacoma FD for Free?

If you wish to watch ‘Tacoma FD’ for free, there may be a few ways to do that. Platforms like DirecTV and Hulu+Live TV come with a 7-day free trial for first-time subscribers. YouTubeTV also offers a week-long and occasionally 14-day free trial. So, you can use the offer to watch the comedy show free of cost, provided you do so in the trial period. However, we encourage our readers to always pay for the content they wish to consume online.