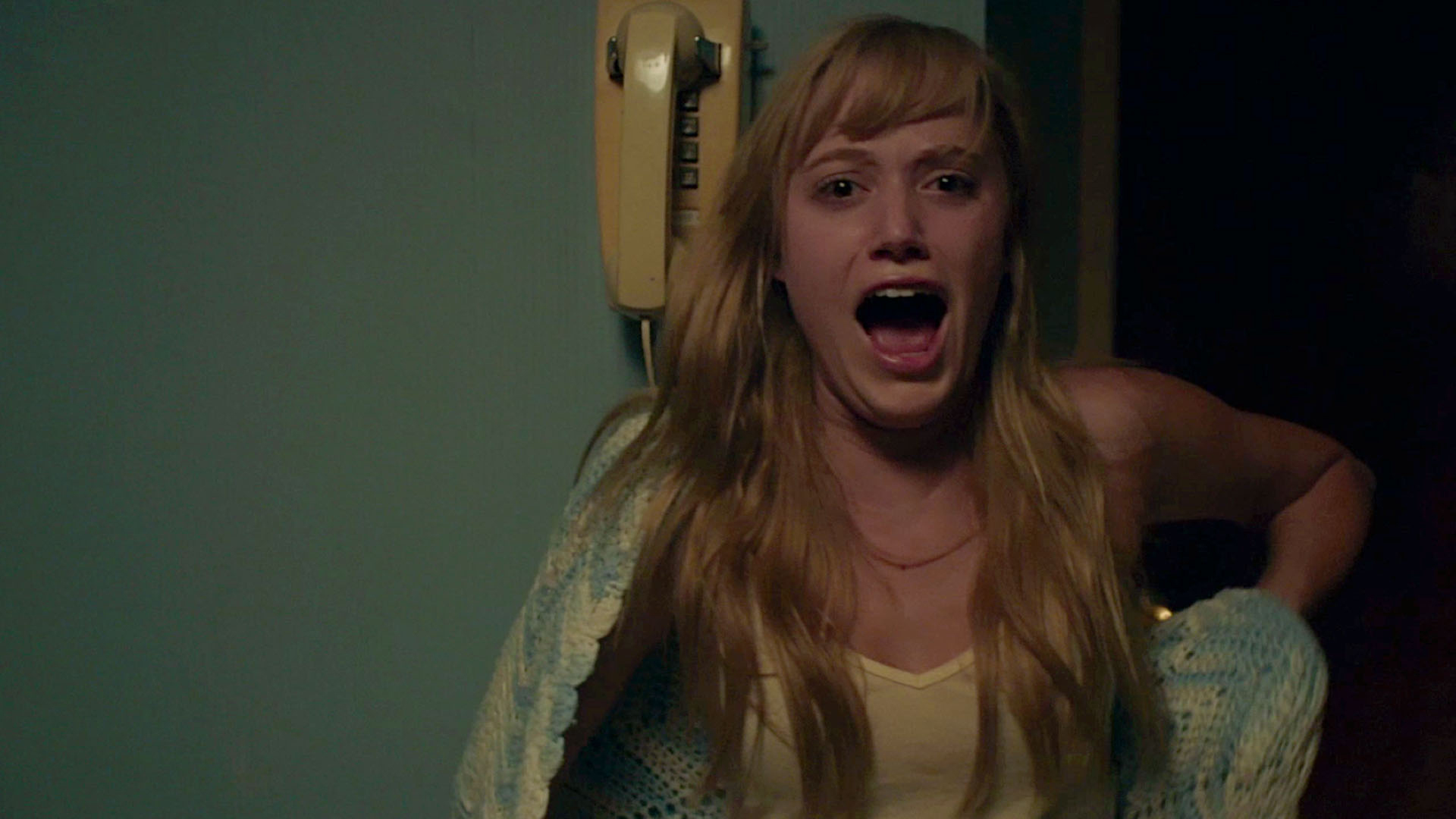 ‘It Follows’ is a 2014 psychological supernatural horror film that centers on a mysterious entity that relentlessly follows its victims. When Jay gets cursed after a sexual encounter, she finds herself being stalked and tries to grapple with the sinister entity that keeps changing its appearance and showing up unexpectedly.

The film masterfully follows a “less is more” format that leaves a lot unsaid but tells the audience just enough to make for a truly unsettling experience. In the film’s many tense moments, a lot of clues are sprinkled into the background that help make sense of the ominous ending. Are you ready to get under the skin of ‘It Follows’ and see what it’s trying to tell us? Let’s go! SPOILERS AHEAD.

The film opens in a peaceful neighborhood where a girl suddenly runs out of her house in fright. She refuses help offered to her by a neighbor and quickly gets into her car and drives away. We then see her sitting outside her car in a clearing, talking to her parents on the phone. The next morning, she is found brutally murdered, with her leg twisted and snapped at an unnatural angle.

We then meet Jay and her sister Kelly, who are childhood friends with Paul. Jay gets ready for her date with Hugh, and the two go to the cinema. While playing a game of spotting strangers, Hugh notices a woman in a yellow dress that Jay cannot see. He suddenly panics and implores her to leave the theater with him, saying that he feels sick.

Later, the two make love in the car, after which Hugh suddenly attacks Jay. When she comes around, Hugh tells her that by having sex, he has passed a curse on to her and that “It” will now follow her around. To prove his point, he shows her a naked woman that has mysteriously appeared in the distance and keeps walking towards them relentlessly.

Jay returns home and, sure enough, is soon accosted by grotesque strangers who no one else seems to notice. Finally, she convinces her sister Kelly and their friends of the danger, and they take shelter in her neighbor Greg’s lakeside hideout. Greg remains skeptical of the whole situation and eventually has sex with Jay. However, three days later, he ends up dead. Jay, Paul, Kelly, and Yara then come up with a plan to try and stop the entity and head to the community pool.

It Follows Ending: What is “It”?

Once in the poolhouse, Jay enters the pool while the rest place a variety of electrical appliances around its edge. They plan on luring the entity into the pool and then electrocuting it. However, when the entity — in the form of a middle-aged man — arrives, it begins to fling appliances into the pool without getting in. Eventually, Paul is able to shoot it, and they run away. We subsequently see Jay pass the curse on to Paul by having sex with him. The film then closes with the two walking hand in hand down the street, with the faint outline of an unknown person walking relentlessly behind them at a modest pace.

The film doesn’t go out of its way to tie things up and ends on a sinister note. The murderous, seemingly unstoppable entity, simply called “It,” remains as mysterious as ever, and its origin is never revealed. However, the film does offer clues as to what It can and cannot do, so let’s check those out.

We know that the entity is not a ghost and has a physical form. This is first hinted at when the group discovers empty soda cans hanging on the windows of Hugh’s abandoned house. These are meant to act as an alarm whenever the entity attempts to enter. Additionally, we see Kelly throw a sheet over the entity in the film’s climax so that Paul can see exactly where it is. Therefore, It is invisible but has a physical form.

The entity also seemingly stalks only one person at a time, as it doesn’t attack Jay until Greg (to whom she passes the curse) is dead. Lastly, the way the girl’s leg is snapped at the beginning of the film and how Paul goes flying when he tries to hit the entity with a lawn chair also tells us that It is very strong and can therefore eventually make its way through most barriers.

Does It Kill Jay and Paul? Who is It Following at the End?

For most of the film, Jay is directly targeted by It until Greg, skeptical of the danger, has sex with her. She then spends three days not being chased but scared, nonetheless, of the entity killing Greg, which eventually happens. After their plan to electrocute their tormentor fails, Jay has sex with Paul, and the film ends with her seemingly shielded by him (for the time being).

However, what is possibly the most sinister aspect of the murderous entity is that one is never truly safe from it. Since it relentlessly follows and kills whoever is most recently infected and then goes after whoever was infected before them, it is only a matter of time before Jay is in danger again. This is why even if Paul sleeps with a prostitute and passes the curse on (as is hinted), the entity could always just kill the prostitute, then Paul, and eventually come back to try and murder Jay.

Though it is left unclear whether Paul passes on the curse, in the end, it is irrelevant because we see the entity following him and Jay in the film’s closing scene. Therefore, Paul is most likely the person that the entity is following at the end, and if he dies, then Jay is next on the list of victims. There is also the possibility that Jay and Paul have sex repeatedly and are able to pass the curse between them, but once again, that only buys them time. Once cursed, they are doomed to forever live in fear of being killed by It.

Do Jay and Paul End Up Together?

Seeing as how Jay and Paul are seen walking down the street holding hands in the film’s closing scene, it looks like the two end up together. However, this can’t all be attributed to romance, and some very sinister factors have pushed them together. Even though Paul’s crush on Jay is evident from the start, the latter is clearly not interested in dating her childhood friend, who is a far cry from the hunky boys she seemingly goes out with. However, when Paul volunteers to let Jay pass the curse on to him, she eventually agrees, and the two have sex.

Therefore, the major reason the two are together is most likely so they don’t have to deal with the entity alone. Since everyone that’s been cursed can see It, both Paul and Jay are able to see the entity and seem to have decided to try and survive the curse together. Therefore, their relationship is not romance but more of a survival technique.

Does It Kill Greg? What Happens to Jeff (aka Hugh)?

Greg is gruesomely murdered by It, who accosts him in his room while taking the form of his mother. Initially skeptical of the curse, the boy seemingly never sees the entity following him until it is too late and it is atop him.

Hugh, whose real name is revealed to be Jeff, passes the curse from himself to Jay. Therefore, as long as Jay is alive, the entity will not come for him. Hence, the film ends with Jeff alive but, like everyone else who is cursed, living in constant fear of being attacked by It.

What is the Final Form It Takes? Why Does Jay Not Describe It?

In the climactic scene at the pool where the group tries to electrocute It, the entity appears as a middle-aged man. Jeff initially explains to Jay that It often appears as loved ones in order to catch its victims unaware. Therefore, Jay refusing to tell her sister Kelly who the entity resembles is a subtle hint that the man that It looks like is someone the girls know.

In a few brief scenes throughout the film, we see photographs of younger versions of Jay and Kelly with the same man that It looks like in the end. Therefore, we can piece together that the entity has taken on the likeness of the girls’ father. The layered clues continue if we consider that the man at the pool house looks exactly the same age as the one in the photographs.

This hints that Jay and Kelly’s father, who remains unseen throughout the film, likely died (or disappeared) many years ago, which is why the entity takes on the appearance of what he looked like when the girls were still children. Jay, therefore, doesn’t describe him to Kelly because she likely doesn’t want to disturb her sister even more than she already is.

Read More: Is It Follows Based on a True Story?