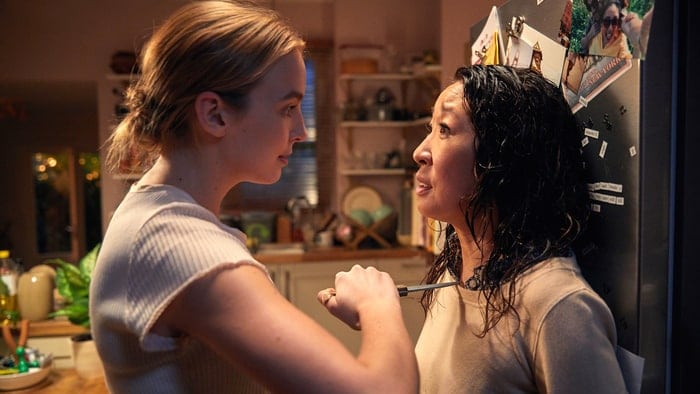 Critically acclaimed series ‘Killing Eve‘ gets a renewal for Season 3. BBC America’s announcement came in as a surprise in the morning after the second season of the show started rolling. British writer Suzanne Heathcote, known for ‘Fear the Walking Dead,’ takes over as showrunner from Emerald Fennell. Fennel replaces Phoebe Waller-Bridge as created of the show.

The news which arrived without any prior notice stuck the stars. BBC America’s top official, Sarah Bennet announced the renewal at a summit for AMC Networks, which includes BBC America and IFC. ‘We love having this show and the brilliant Sandra Oh, Jodie Comer and Fiona Shaw on our networks,’ Barnett said prior to the announcement. ‘Phoebe Waller-Bridge and Emerald Fennell have delivered two addictively entertaining seasons. As we did last year, we’re renewing Killing Eve right out of the gate, now with Suzanne Heathcote as lead writer, as a sign of confidence; we adore this show as much as our fans do. Killing Eve doesn’t do anything in a templated way; we love giving the opportunity to three genius women to make their mark,’ she explained.

The renewal announcement surfaces just one day after the premiere of the show’s Season 2. The first season aired on BBC America was a huge hit. The highly-anticipated Season 2 is being shown on BBC America and AMC. The plot is based on the ‘Codename Villanelle’ novellas written by Luke Jennings. ‘Killing Eve’ stars Oh and Jodie Comer as an MI6 operative and psychopath assassin. ‘I’m very excited that the Killing Eve baton is being passed onto another incredible writer for season three. We can sleep soundly knowing these characters are safe in Suzanne Heathcote’s hilariously murderous hands,’ incumbent showrunner Waller-Bridge is quoted saying in a THR report.

‘I’m very excited that the Killing Eve baton is being passed onto another incredible writer for season three. We can sleep soundly knowing these characters are safe in Suzanne Heathcote’s hilariously murderous hands,’ incumbent showrunner Waller-Bridge is quoted saying by THR.

The third season is executive produced by Sally Woodward Gentle, Lee Morris, Phoebe Waller-Bridge, Gina Mingacci, Damon Thomas, and Oh. Jeff Mevloin is the new addition in the executive producer bench. The series earned Oh a Golden Globe, SAG Award, Critics’ Choice Award and Dorian Award for her performance in the first season. On the other hand, Jodie Comer received the Royal Television Society Award and Broadcasting Press Guild Award for the same season. ‘Killing Eve’ is widely praised for its gritty portrayal of the woman protagonists and received the TCA Award for Best New Show and the Gotham Award for Breakthrough Series during Season 1.

The decision comes in the backdrop of AMC’s makeover plans. ‘Killing Eve’ renewal one of many announcements made by the company during the last couple of weeks. It also revealed details about a new ‘Walking Dead spinoff,’ the renewal of IFC’s ‘Documentary Now!‘ and the creation of nature centered micro-net on BBC America. The dedicated micro-net is reportedly more than a programming block or themed series of shows. According to the company, it is a full-fledged brand with its own logo and promotional playbook, featuring some 2,000 hours of programming. The major attractions of the micro-net are Sir David Attenborough’s upcoming ‘One Planet: Seven Worlds,’ ‘Frozen Planet II’ and ‘Planet Earth III.’

‘As the past, present and future U.S. home to this iconic BBC nature and wildlife programming, we know that epic documentaries about this spellbinding blue planet we all share pull people from all ages and all ages together in a transcendent way that’s unlike anything else,’ Sarah Barnett said.