What is Killdozer? What Happened to It? 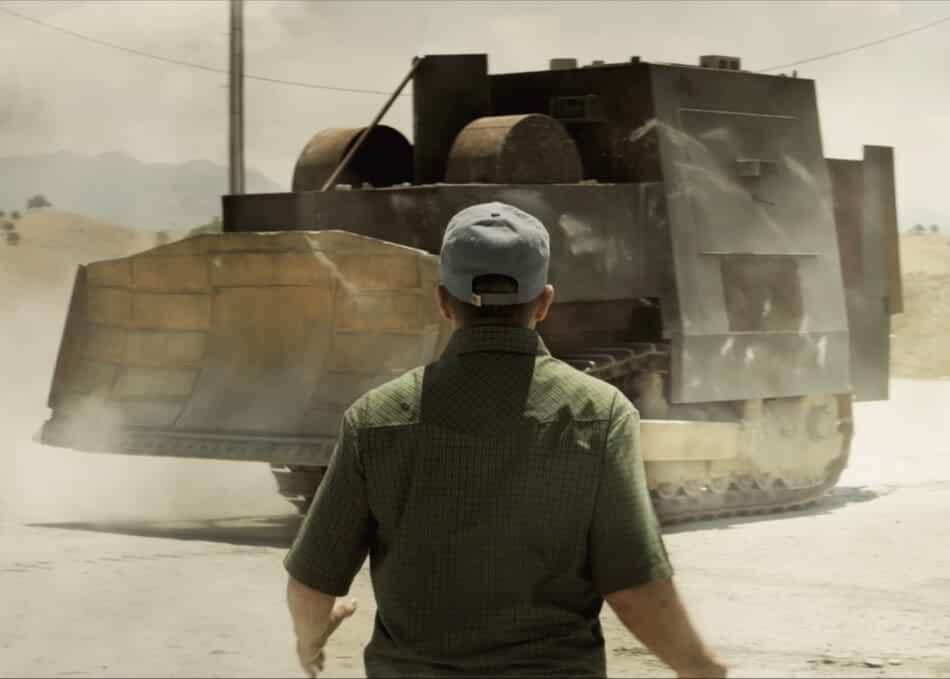 Netflix’s ‘Tread’ tells the story of a man named Marvin Heemeyer who decides to avenge the injustice done to him by the rich and the powerful of the town. At the beginning of the documentary, we are given a quick background of Heemeyer, focusing particularly on his art of welding. We are told about the changes he would make to his friends’ snowmobiles, and how he could fix and make whatever he wanted, with the guarantee that it wouldn’t break easily. This foretelling comes into play when we witness his ultimate creation- the behemoth that no one could ever forget. Justifying its title of “Killdozer”, the bulldozer that Heemeyer devised is something that hasn’t been seen before or since. Here’s all you should know about it.

The Killdozer is actually a Komatsu D355A bulldozer. When Heemeyer had bought it, the machine weighed 49 tons. By the time he was done with it, he brought it up to 61 tons. How did he do that?

It took about eighteen months for Heemeyer to create his masterpiece. The most important thing in it was to create an armor plating that would protect it from outside attack, something he had rightly anticipated. In the documentary, when he comes face to face with the cops, we watch them throw everything that they have at him, from all sorts of guns to even explosives. What they didn’t know at the time was that Heemeyer had created a two-layered steel plate armor with concrete poured inside it, the total of which was over one-foot thick. This protection made the machine impervious to anything the cops could possibly have.

The bulldozer had been packed from all sides, so much that the cops could not find a way inside it even when the machine had stopped. The reason for this was that Heemeyer had created it in such a way that there would be no entryway to it. He hadn’t planned to get out of it alive, so the day he decided to go forward with his plan, he lowered the armored hull over the dozer using a crane. Once the lid was shut, there was no going back for him.

This exceptional safety measure created the problem of visibility for Heemeyer. He needed to see where he was going, but he couldn’t with the tank he had turned the dozer into. For this, he fitted several video cameras that would show him the path on the two monitors on the dashboard. Because the cameras were also very crucial for him, he knew that in trying to stop him, the cops would try to aim for them. For this, he covered them with a 3-inch shield of bulletproof Lexan.

Since all the destruction and moving around town would create a lot of dust along the way, he also fitted compressed-air nozzles to blow the dust away from the cameras, to prevent any hindrances to visibility. Cramped inside the bulldozer, heat would be his next enemy, and to beat it, he fixed fans and an air conditioner inside it. To stave off attacks from the outside, he also fitted three gun-ports fitted with a one-half-inch-thick steel plate. He had access to a .50 caliber rifle, a .308 semi-automatic rifle, and a .22LR rifle, all of which he used to create as much chaos as he possibly could.

What Happened to the Killdozer?

Heemeyer’s killing machine had proved to be a challenge to law enforcement when they were trying to halt it in its tracks, and it also turned out to be absolutely impervious when it finally stopped. If it hadn’t been for the basement in Gambles hardware store, there would have been no way to stop it, as Heemeyer had built it with such strength that none of the explosives used by the cops could make a single dent on it. In the end, an oxyacetylene cutting torch was used to gain entry into it, which is where they found Heemeyer’s dead body.

Once the situation was contained, they decided to completely dismantle the thing. Heemeyer’s actions had garnered a lot of public and media attention, with a lot of sympathizers. Had the Killdozer been allowed to stay as is, the cops were afraid that someone else might be encouraged to pay a tribute to Heemeyer. As a result, it was scrapped in 2005, and its pieces were dispersed in separate scrap yards, lest someone would want to keep one as a souvenir.

Read More: Who is Marvin Heemeyer in Tread?