In March 1992, two young girls enjoying the start of spring break were murdered at a beach in Florida. At the time, the authorities struggled to solve the case because of a distinct lack of evidence. But that changed when a phone call came in, and a confession followed. Investigation Discovery’s ‘Swamp Murders: Point of No Return’ delves into the slayings of Megan Carr and Cherish DeSantis and how the police found out who was responsible. So, if you’re curious about what happened, here’s what we know.

How Did Megan Carr and Cherish DeSantis Die?

Megan Carr and Cherish DeSantis were both born in August 1975. They were the best of friends and lived in Thomasville, Georgia. While Megan was part of the band and drama troupe at school, Cherish was a cheerleader. The 16-year-olds were quite close to each other and were often seen together. At the time of the incident, Megan and Cherish were excited about their spring break and wanted to drive down to Alligator Point in Florida.

The girls left home in Megan’s car at around 10 am on March 27, 1992. The authorities believed they reached their destination sometime after noon. Then, at about 2 pm, a vacationing police officer and his wife found Megan and Cherish’s dead bodies at the beach. They were dressed in bikinis, and per the show, one body was found lying on top of the other. Megan and Cherish were each shot twice in the head with a .38-caliber handgun.

At the scene, the investigators didn’t observe any signs of a struggle. Furthermore, Megan and Cherish weren’t sexually assaulted or robbed; all their belongings, including the car, were still at the beach. The authorities questioned a few people who were in the area. However, that didn’t turn up anything worthwhile apart from one witness who remembered seeing a suspicious car at the beach around the time of the shootings. 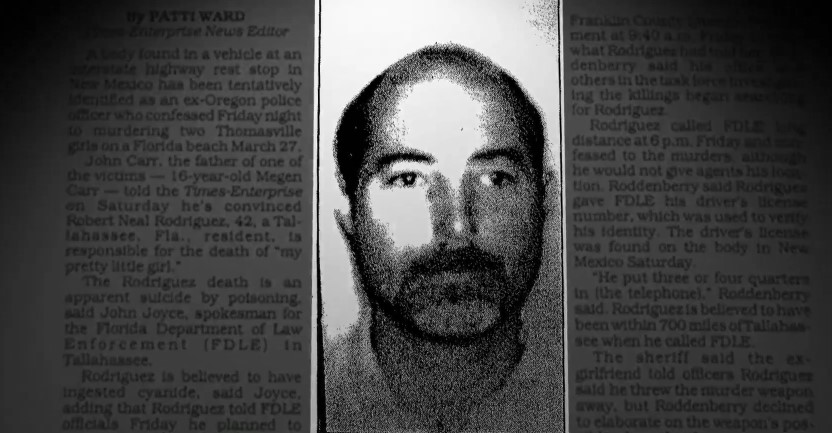 Then, the police ruled out a few potential suspects, including Cherish’s boyfriend. Just when the case felt like it was about to hit a dead-end, the authorities got a phone call. A woman said that her ex-boyfriend had confessed to killing Megan and Cherish. She identified him as Robert Neal Rodriguez. Robert was a police officer in Oregon for about two years, starting in 1975, before quitting. He was a Mormon and had done some missionary work in Guatemala.

At the time of the incident, Robert was living in Tallahassee, Florida, with his mother, who had died on Easter Sunday. A few hours after the woman’s call, Robert contacted the authorities himself. On May 15, 1992, Robert called in to confess to killing Megan and Cherish, sharing some details from the crime scene that only the killer would know. During that conversation, Robert also admitted to murdering Valerie Hunt, a 22-year-old woman who went missing in 1984, with her remains being found in a pond in Wakulla County, Florida.

How Did Robert Neal Rodriguez Die?

While the authorities tracked Robert down to New Mexico, they couldn’t get him to stand trial for the murders he confessed to committing. The 42-year-old was found dead on May 16, 1992, in his car at a rest stop in New Mexico. Robert had left Florida a few days after the murder when he was questioned regarding his car’s description matching the one seen at the crime scene. Robert had killed himself by taking cyanide; there was a vial around his neck with some white powder. A note said that he did this “for the sake of the girls’ parents, for their peace of mind, and to avoid a prison term.”

In the days after Robert’s death, a newspaper outlet received a letter explaining his actions. Part of it mentioned, “Whether they know it or not, I am wanted for three murders by the Florida Department of Law Enforcement. I don’t think they could prove any of the three, but I can’t live with myself if I’m going to act like this.” In the note found on his body, he also talked about sending the authorities a letter. Later on, the families of Megan and Cherish received similar letters from Robert.