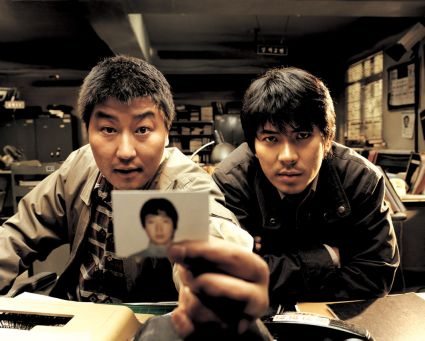 What drives a person to do terrible things? How far can someone go for the pursuit of truth, and who decides ‘how far is too far’?

‘Memories of Murder’ asks these questions throughout its narrative, but leaves the answers for the viewers to decide, never once insulting their intelligence.

Based on a true story, ‘Memories of Murder’ is a riveting crime-drama about South Korea’s first serial murders. Set during the times of military dictatorship in South Korea, the film is as much about the people involved in the investigation of the murders than it is about the murders themselves. Two young women are found raped and murdered in similar fashion, and the responsibility falls on the seemingly incompetent shoulders of Detective Park Doo-Man. The incompetence doesn’t spawn from ignorance; it is more of a procedural matter. His methods are not crisp, forensics are non-existent and he relies on stock police work-quick and brutal. The frustration is palpable, as he collects improper evidence which culminates in hasty decision-making. A scene in the fields — where it is revealed to the public that the suspect is still at large and the police hasn’t been as forthcoming as they should — is one of the best shot scenes in the movie, and possibly, cinema. A slow motion shot of the detective and his colleagues running through the fields trying to hide their ineptitude, as a possible re-enactment of the actual events turns into a farce.

Detective Seo –an expert investigator — is called from Seoul to assist Detective Park in the case. Thus starts a clash of methods, character and inevitably egos. While detective Park tries to get a confession out of a mentally challenged boy, Detective Seo tries to gather the clues and solve the jigsaw.

Once again, we get to see the desperation, and the frustration of our central protagonists. As they set their minds on a key piece of evidence-a song regularly played on radio, every night there was a murder-an uneasiness sets in. Detective Seo is convinced that he has found the murderer at last, even when the forensic evidence suggest otherwise. In another masterfully shot scene near a railway tunnel, the central themes of the movie play out like a song. Detective Seo almost kills the innocent boy, but Detective Park stops him. The genius of the film lies in the fact that the viewer too is convinced about the identity of the killer. Yes, the characters are that fleshed out.

In reality, the identity of the killer is still a mystery. And that too, is shown at the very end, when years later Detective Park visits the crime scene. He is told by a girl that another man visited this place and was remembering about a certain thing he did there.

The film is beautifully shot, and the pacing is perfect. The first moments are serene, and are a stark contrast to the horrors ahead. But what stands apart is the use of sound — it becomes quite clear that the film is made by a master craftsman; and Bong Joon-Ho is definitely one.

The importance of this film on cinema can’t be denied; there are crime-procedural dramas, and there is ‘Memories of Murder’. Its influence can be seen in the 2007 David Fincher film ‘Zodiac’ and most importantly, the highly acclaimed crime-drama TV series directed by Cary Fukunaga-‘True Detective’.

‘Memories of Murder’ is a gem of Eastern Cinema, and deserves a watch-if not two-to appreciate its scope and vision.

Read More: The 20 Best Hollywood Thrillers of All Time