Remembering Michael Cimino, One of the Most Polarizing Figures in American Cinema 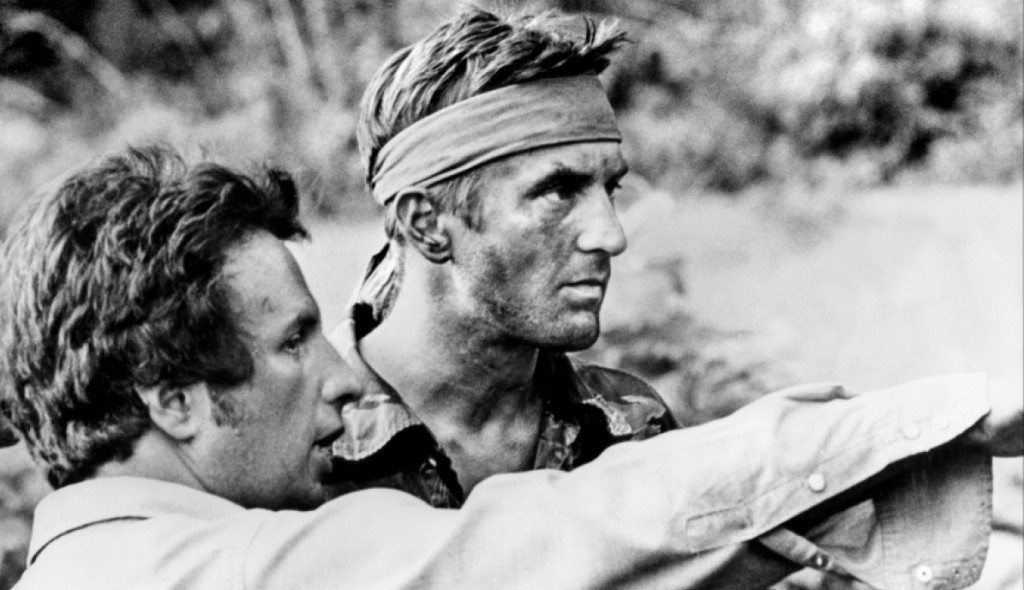 In hindsight, the images are pristine and perfect, sweeping the audience back into the Old West as few films before it or since have managed to do. With brash confidence, and a startling command of the flickering image, Michael Cimino made his mark in the late seventies with the Academy Award winning The Deer Hunter (1978) and two years later watched all his success turned against him when Heaven’s Gate (1980) opened and closed the same night, ravaged and torn to pieces by the critics, who were laying in wait for him.

Cimino, 77, passed away quietly Saturday in Los Angeles, the most polarizing figure of American seventies cinema at rest. Never before has a filmmaker ascended to the top of the industry, winning the Academy for Best Director and Best Picture, two years later ruined by the big budget failure of his dream project which would bankrupt a studio and end the directors era that so dominated the seventies. His arrogance and ego stormed out of control during the shooting of the western, so much so he blatantly disregarded the advice or demands of the studio executives making the picture, actually banning them from the set, and then forbidding them from speaking to him or looking in his direction. From an original budget of eight million dollars, the money Heaven’s Gate (1980) cost tapped out at forty four million dollars–in excess of two hundred and fifty million today–an insane amount to spend on a western running nearly four hours long and without a major star.

“I owe my career to Clint”, Cimino once remarked, crediting Clint Eastwood with giving him a chance to direct the crowd pleasing Thunderbolt and Lightfoot (1974). He and Eastwood remained lifelong friends, as did co-star Jeff Bridges, two of the loyal friends Cimino could always count on when his career failed.

In 1977, only a few people knew who Michael Cimino was. By the end of 1978, most of the major players in the film industry knew of him and respected him mightily as an artist for his new film The Deer Hunter (1978) which began screening in the summer, and by fall was the most talked about film of the year. Cimino had made a film set, partly in Viet Nam during the war, for the first time plunging film audiences into the madness that was Viet Nam. Writing from what he said was first hand experience, the result of being attached to a Green Beret until during the war, Cimino told the story of three friends from a small town who end up together in Viet Nam, in the same POW camp where the prisoners are forced by the Viet Cong to participate in playing Russian Roullette for cash. As a single bullet is loaded into the chamber, the weary men are forced to hold the gun to their heads and pull the trigger, perhaps landing on an empty chamber, perhaps blowing their brains out. Cimino said he had seen or been told of first hand accounts of this means of torture, and used it in his film. The metaphor “one shot” will come to mean so much through over the course of the film, weaved into the narrative beautifully yet with scorching power.

Though undeniably powerful on the screen, the truth be told, Cimino had not seen anything of the sort or been told anything of the kind because it did not happen. Further he had not been a Viet Nam veteran, he had never left the United States until he shot The Deer Hunter (78) in Thailand.

Plain and simple he lied. The Russian Roullette motif had been part of another screenplay given to Cimino by Michael Deeley a producer for EMI in hopes the director might make the movie. Instead he re-wrote it entirely, incorporating the motif into his story about three men in Viet Nam. So worse than lying, he stole the idea and lied about it.

He lied. To the studio, to the critics, to audiences, to his actors, to every Viet Nam veteran who saw the film.

Had it come out about Cimino before the years end he might not have (no…he would not have) collected the lions share of awards for The Deer Hunter (78) which included the aforementioned Academy Awards, the New York Film Critics Award, the Golden Globe, and the Directors Guild Award for Best Director. Had the story of his falsehoods broke a month earlier, The Deer Hunter (78) might not have won a single award and the years best film Coming Home (78) which also dealt with Viet Nam, though honestly, might have taken the awards it so deserved.

Further Cimino would not have signed with United Artists to make his next film, Heaven’s Gate (1978), his dream project.

The executives at United Artists learned the hard way that Cimino was not the most forthcoming fellow, not the most honest man, and did not play by the rules of the film games at all because all that mattered was his vision. Now, was Heaven’s Gate (80) as bad as critics of the time stated? No not at all, in fact it was a flawed masterpiece, and in the years since has been celebrated as such. It seems they were feeling betrayed by the lies of The Deer Hunter (78) and felt he needed a come-uppance, and boy, did they give it to him. Never before has a director gone from such heights to such lows, from the top of the mount to the lowliest sewer. The studio was bankrupted, left reeling with the impact of the film. To gain some insight, Cimino made a massive period piece for forty four million dollars. For the same studio, that same year Martin Scorsese made Raging Bull (1980) shot in black and white (more expensive), a period piece (forties and fifties) in New York City, which required Robert De Niro to train and be in peak fighting shape, recreate fighting scenes, and required Robert de Niro to go gain eighty pounds when the company shut down for six months, keeping everyone on payroll. The cost? Eight million dollars. Granted Cimino had some challenges Scorsese did not have, but so many of the challenges were brought on by Cimino’s own inflated ego and self-indulgence and blatant disregard for the studio suggestions.

He considered himself an artist and anyone in a suit to be less than he was. Banning them from his set, sending out memos that they were not to look or even speak to him? This to the men giving him the money to make his vision? He possessed no real respect for the studio men, until they threatened to take away his precious film, then he listened, then he worked to the schedule, but only then. When they threatened to take away the prologue to the film, the Harvard sequence, he capitulated and worked with them, not against him, but it took drastic measures.

Contractually obligated to deliver a cut of the film not exceeding three hours, the first print he showed the producers and studio heads was five and a half hours long, and he announced he had fifteen minutes or so to trim. Back he went and got it down to four hours, which is the version I saw in Toronto in 1980, gifted with passes from a professor I admired.

I stand by what I said earlier, Heasven’s Gate (80) was never the disaster it was said to be, there are some very good things in it, and as a visual entity it is rather stunning. The roller skating sequence is sublime, the outdoor sequences are breathtaking, Christopher Walken looks dangerous and haunted (despite mascara) and the ending is melancholy and sad, but so much of the film is tedious and tiresome. And the sound is atrocious, there are entire passages of dialogue that cannot be heard or deciphered. The Criterion Collection edition of the film restores it to its former glory, and again, there is much to be admired. Cimino had a hell of an eye, he knew what images to put on the screen, but at what cost?

After Heaven’s Gate (1980) he was virtually a pariah in the business, directing just four more films before leaving Hollywood in 1996, his last film, going straight to video. One film Year of the Dragon (1985) benefited from a fine Mickey Rourke performance but was littered with racist narrative throughout. He spent much of his time in Europe, addicted it seemed to plastic surgery, altering his appearance to the extent of Michael Jackson. The once burly, thick-necked Cimino, with a shocking mop of dark hair was reduced to a rail thin, elfin looking man, a shadow of who he once was.

It seems ironic that Heaven’s Gate (80) is now considered something of a masterpiece in some circles, one of the great American westerns. Maybe it always was. With the critical attack and assault so aggressive, United Artists pulled the film from release and demanded Cimino recut it, which he did. It was released a year later  and caused nary a ripple, already forgotten, just as he was. It was if he had never existed. Rumors came and went that Robert De Niro had a great deal more to do with the direction of The Deer Hunter (1978) than once thought, which I simply do not believe. Nothing in his early work suggested De Niro was a director or remotely interested in directing, though like all great actors I am sure he had opinions which he shared with Cimino, but nothing more. The seventies was a time directors had all the power, and Cimino exercised the power.

All the great directors of the seventies would falter with at least one box office flop and critical disaster, yet Cimino seems to be the only one ruined by his. Bogdonavich (At Long Last Love; 1975), Friedkin (Sorcerer; 1977), Lumet (The Wiz; 1977), Pollack (Bobby Deerfield; 1977), Scorsese (New York, New York; 1978), Spielberg (1941; 1979) and Francis Ford Coppola (One from the Heart; 1982) all suffered their failures, yet rebounded in one way or another, if even for a short time. Cimino was never given another chance, so great were his transgressions. One film, a single movie ruined a studio created in the silent era, and that is a lot to forgive…and they did not.

Cimino had talked about making another film as recent as three years ago, when the Criterion edition of Heaven’s Gate (1980) came out, but it never happened.

Filmmakers will mourn him, no doubt, others will hold in a sort of esteem with an asterix. Even in death he divides and polarizes. Perhaps the decisions about him will be made by future audiences watching his work, which is immortal…perhaps it is being done as we speak.