Michael Corleone is Cinema’s Most Tragic Hero. Here’s Why.

There is a beautiful scene in ‘The Godfather’ during the famous Connie wedding sequence where we are first introduced to the character of Michael Corleone. Amidst all the singing and dancing going on in the wedding, we are quietly taken to a couple sitting away from all the celebrations, having their own wonderful time in their own secluded spaces. With the scenes intermittently cutting between Connie’s Wedding party and Don Corleone’s meetings in his office, Coppola presents us with a character who feels he doesn’t entirely belong to the family or its “business”. When Vito Corleone demands that his youngest son, Michael, be present for the family photo, we see a smiling Michael walking towards the camera, pulling his gorgeously shy girlfriend into the picture. A pivotal moment to the film’s character development. Michael was a marine during World War II with a seemingly high sense of morality. He assures his girlfriend, Kay, that he is not what his family is. There is a palpable difference between the worlds of Michael and Kay and that of the Corleone family. The symbolism in the family picture scene makes it apparent that fate would have Michael pull Kay into the dark, tragic world of crime and violence, shattering their playful world of youth and joy. 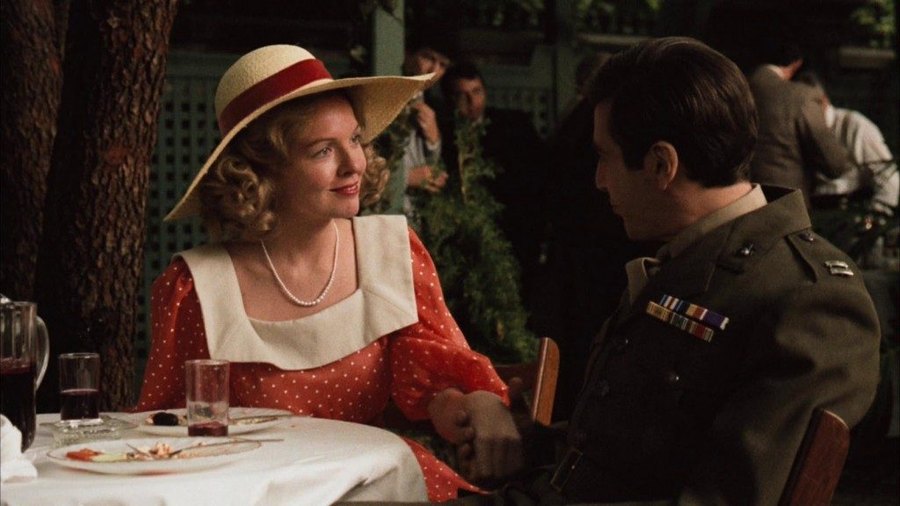 Although Kay’s character is given very less screen time in both the ‘Godfather’ films, it is only through her eyes we see the transformation in Michael’s character which makes her a big part of who he was. We are not given many clues about Michael’s past life. The ending scene of ‘The Godfather Part II’ tells us that Michael fought against his family’s objection to his joining the army. He stood out from his family as a rebel, opposing his brother’s views regarding politics and patriotism. Being the youngest son in the family, Michael was the most pampered and looked after kid among the others which gave him the freedom to make his own choices in his life and question the path that his family chose as their way of life. Michael was Vito Corleone’s most beloved son. Vito wanted Michael to be everything he could never be which is what makes Michael’s character and the film a tragedy of sorts. The underlying irony that seeps through the movie is that it is the same young, little boy taken care by his father to be brought up at a distance far beyond his reach of the family’s business, who turns out to be the most ruthless, immoral don of the family. 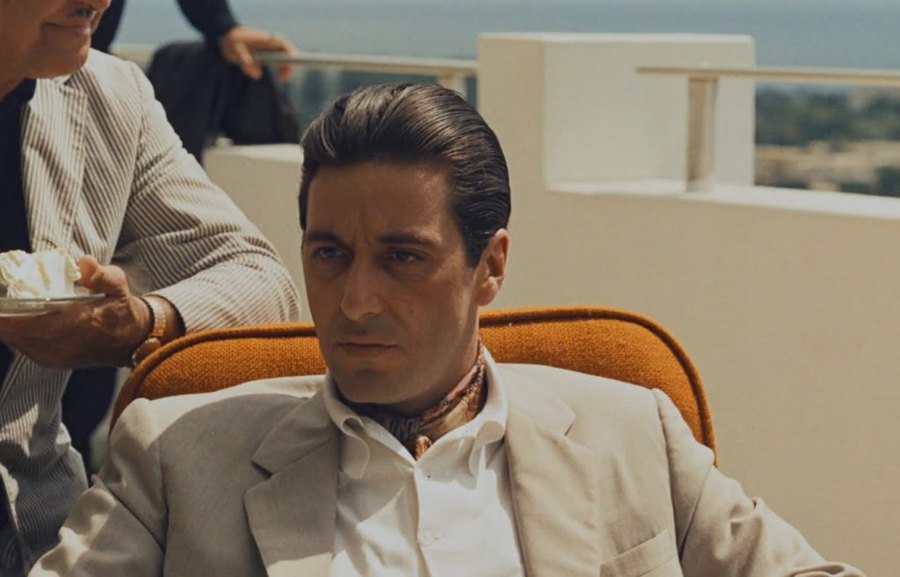 Michael made the unimaginable sacrifice for his family from being their hero into the monster he always feared would become one day. It was a sacrifice that cost him his life, the people he loved and cared about the most. Michael never expressed his true self ever since he became the head of the family business. Like his father, he took the utmost care to not involve his loved ones get mixed up in the family business. Michael’s defeat begins with him giving up his moral values and ends when he waits for his mother to die so that he can kill his brother who betrayed him. He doesn’t let people know what he is thinking. Not even to those who were close to him. In one of cinema’s most powerful yet heartbreaking scenes, he hugs his brother while signaling to his bodyguard that he should later be killed. In the end, Michael realizes that he emerged victorious in a war that has defeated him in every way. The people whom he fought for, were all gone and he was left behind, deserted. Deserted in a cold winter of memories and a lifetime of contemplation on his actions and choices.

Apart from the incredible amount of depth given to the character, what makes it more compelling is Al Pacino’s unforgettable portrayal of Michael. It is impossible to imagine any other actor portray Michael with such subtlety and intensity that Pacino managed to bring to the character. Every second on-screen, he is electrifying. It is a performance for the ages. One that never gets old. The one thing that blew me away about this performance is the manner in which Pacino uses his eyes to convey the most complex and delicate emotions. There is absolutely nothing that is showy about the performance which, at the hands of another actor, could have easily gone over-the-top but back in the 70s, Pacino was a true master.

Michael Corleone is one of the darkest, most complex and tragic characters ever written in cinema history. 45 years later, that final image of him sitting all alone by the lake at the family compound still haunts us. And will continue to for many years to come.

Read More: Why is ‘The Godfather’ Regarded as One the Greatest Movies of All Time, Explained