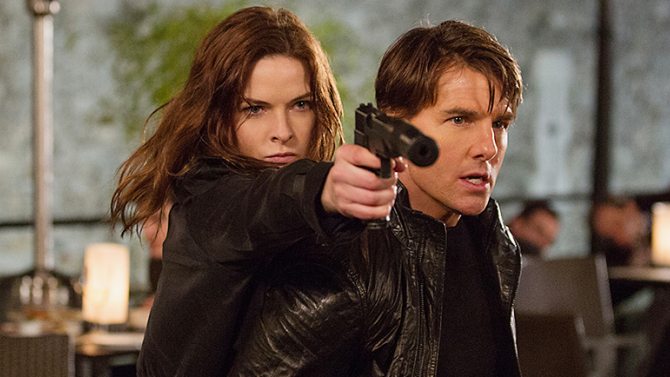 First and foremost, let’s get this straight: Ethan Hunt is no Jason Bourne. Or rather I should say, Jason Bourne is no Ethan Hunt. Hunt more than a spy is like a superhero. He may not be blessed with any superheroes, but he does super-human things — not very dissimilar to James Bond. So, when I went into watching ‘Mission Impossible – Rogue Nation’, I didn’t expect to watch a gritty spy thriller — which by the way it isn’t — but a well-executed action film. And I got exactly that: a sleek action film with some thrilling action-scenes, bike-chases, car-explosions and some underwater adventure. So, if you keep your expectations in check, just like I did, there is no reason you won’t like the film.

Having said that, ‘Mission Impossible – Rogue Nation’ is also plagued with issues that usually such a film suffers. Makers are more busy on creating and imagining action scenes than paying much attention to story or plot. And therefore, as long as action scenes are playing in front of you, you will find yourself at the edge-of-the-seat and involved. Everything else is full of cliches and seen-that-before moments. Dialogues are straight out any James Bond film, or even the previous MI films. To its credit the film picks up every-time you start to think that you are going to lose interest. And this is mostly done by interspersing the film with a lot of action at every step of the way, one more thrilling than the other. I would like to point out here that motorcycle-chase sequence in the film is as good as than any chase sequence I might have seen before.

In terms of the plot, as I already said, it is not something that you may not have seen before. Bearing close similarity to Bourne series of films, ‘Rogue Nation’ also has a spy — Ethan Hunt (Tom Cruise) in this case — on a run from CIA. He, with his IMF team, are after the Syndicate, an International terror organization of ex-secret agents who have gone rogue. Meanwhile, CIA believes that no such organization exists. In the quest to nab the man running Syndicate, Solomon Lane (Sean Harris), Hunt runs into Ilsa Faust (Rebecca Ferguson), who claims to be part of the syndicate, but is actually working for British spy agency. What follows is a one impossible mission after another for Hunt across several countries.

As I mention in the title of this review, you should watch this film for Ilsa, played by Rebecca Ferguson, more than anybody else — yes even Tom Cruise. The reason being, not only is she exceptional in all the stunt and action scenes, but she is also the most interesting character of film. As an audience, you keep guessing which side she is on right till the end. Without her, ‘Rogue Nation’ won’t be the film it is.

I would like to give credit to the makers of the film — and even Tom Cruise — for giving enough room for Ilsa — and Rebecca Ferguson — to flourish, and not make this just about Cruise. All throughout the film, I was waiting for Cruise and Ferguson to break into a love-making scene. But surprisingly [spoiler alert], there was none. They don’t even share a kiss. That, usually, doesn’t happen often in Hollywood action films — where women are there just for eye-candy. Yes, there is a trademark coming-out-of-the-water-bikini-scene in the film, but let me tell you this: Ilsa i.e. Rebecca Ferguson kicks ass in every other scene. She rides motorcycles like a racer, she single-handedly runs down several men in fist-fights, and she even saves Ethan Hunt’s life twice, while herself not even incurring a bruise. After ‘Mad Max: Fury Road‘, this is second movie this year, where a woman is given such prominence in an action film. A refreshing and welcome change, I must say, for Hollywood.