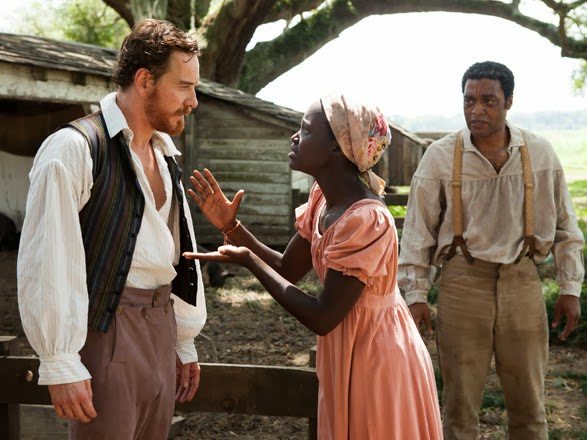 In a glimmer of hope that flickers, when there’s nothing to bind to, except a desire to live, that desire alone can be enough to wither the toughest of storms. That desire to live, became the hope to which Solomon Northup clung to, in his quest for freedom. We take our freedoms for granted, until its taken away from us. Only then we realize how invaluable it is. Even as small a freedom as free will to take leave from work, if taken away from us, feels insufferable. Now, imagine, if someone takes away all your freedoms – Freedom to speak what you want, freedom to live as you wish, freedom to go where ever you want. The only freedom that you are allowed is freedom to breathe, and that too can be taken away any moment. It’s dreadfully inconceivable to lead such a life, but truth – as harsh as it is – there have been times, in past and even in present, when humans have bestowed this misery upon their own fellow beings by making them lead a life stripped of all the freedoms that everyone is rightfully entitled to. The most blatantly brutal form of this , commonly referred to as ‘slavery’, was practiced in America decades ago. As shameful as it might sound, but the truth is it’s still practiced all over the world, only not in the same unabashed or obtrusive way as it was done in the past.

Therefore, 12 Years A Slave, feels so relevant to present even if it is based in the past. The film is about a free black man who was wrongfully kidnapped in Washington D.C. in 1842 and sold into slavery. Brutally honest in its rendering, and unflinchingly told, 12 years A Slave, never shies away from its motive which is to show us [humans], the mirror in which we can see the extremities of cruelty that humans are capable of comitting on other fellow humans. 12 Years A Slave, can be a no easy sit for many, but that’s also its basic goal to make us realize the pain which generations of African Americans had to go through. But at the same time, scope of the film doesn’t end there, it also forces us to question ourselves. Do we have the right to take away anyone’s freedom ? What if someone takes away our freedom and subjects us to such brutality ? And the painful fact is, what ever we see on screen isn’t plain fiction, but just a fictional depiction of what happened in reality.

It is important to note, that gruesomeness shown in the film is not to be equated with goriness, because both are vastly different. While goriness may be difficult to watch, the intention is always to provide sadistic pleasure but in 12 years A Slave, the intention of gruesome scenes is to show us the truth. That ugly truth, which has never been so honestly portrayed on-screen in spite of the fact that everyone in America is either consciously or sub-consciously aware of it.

Steve McQueen in short career of three films, has gone from strength to strengths. While many might call 12 Years A Slave his crowing glory, which it might very well be, but it won’t be wrong to state that he was born with a keen sense of human suffering, and that is very evident from his first film Hunger. His next, Shame carried forward with the same theme, albeit in a different form, and I believe it still remains his most complex and intimately beautiful work, though 12 Years A Slave is definitely film-making of highest order. McQueen’s style is all pervasive in the film, right from letting the camera linger on his subject, till the time you start feeling uncomfortable with it. While at other times, he won’t focus on the subject but let you imagine first with help of sound, and then slowly and unhurriedly reveal the truth. One scene in particular is worth mentioning. This whipping scene is excruciatingly brutal but at the same time fascinating in the manner in which McQueen raises the tension and further raises it, till the time your reaction changes into a shock, and ultimately, into devastation.

The film couldn’t have the film it is, without the powerful, affecting work of its actors. Ejiofor has been in the industry for more than a decade, but this is the film which is going to launch him into stardom. As the Central character, Solomon Northup, he is not only effective but renders a deeply moving and exceptionally carved performance. In many scenes, he communicates only with his eyes, conveying everything what Northup is feeling or thinking. Lupita Nyong’o plays the most tragic character, Patsey who happens to be the subject of interest of the evil plantation owner Epps. She, in the debut performance, is unbelievably good and holds her own fort. The scenes in which she is in, couldn’t have been easy to play especially where Patsey is whipped nearly to death. Last but not the least, Michael Fassbender as Epps, plays the most reprehensible character you would have seen in a while on-screen with amazing confidence and purpose. Just because his character is evil doesn’t mean his acting is not likeable. He chews every scene he is in. At the same time he brings a palpable sadness to his character, which is different from playing it just evil. One can clearly perceive how his character, Epps has become slave to his own compulsions as slave owner, and finds himself torn from inside, between his compulsions and his love for Patsey. Masterful portrayals.

Technically too, film is an example of supreme workmanship. Be it, the Score of the film or its beautiful cinematography and production design. Everything top notch. Only one minor qualm with the film is that story doesn’t feel like it happened for 12 years. It feels more compact, like it happened within 1-2 years. But, then it hardly matters.

12 Years A Slave, over and above its technical, directorial, and acting merits, is a brave film. In the end, 12 Years A Slave may not be the pleasureful viewing experience. But it doesn’t need to. It achieves more than what a purely entertainment film does. It provokes mind and touches heart.