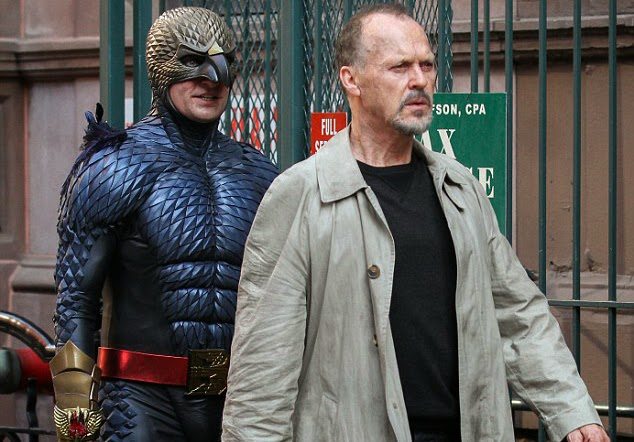 Having loved/liked every film that Alejandro González Iñárritu has made till date, it was but obvious that I was awaiting Birdman with childlike enthusiasm and eagerness. One fine day about a decade back, I had stumbled upon Amores Perros, Iñárritu’s debut film, and was blown away by its rawness and the rest as they say, was history. 21 Grams, Babel, Biutiful; film after film he kept impressing me, though, I have to confess, my fondness of his films was on a declining curve (I loved 21 Grams, and just about liked Biutiful). Not to mention the fact that all his films were similarly themed — based on human suffering, in general — and were showing signs of weariness. So, when it was announced that he was doing a dark comedy next in the form of Birdman, it immediately re-kindled my expectations and re-energized my hopes of seeing something uniquely entertaining that I had known Iñárritu for.

Birdman is about Riggan Thomson, who once played the superhero Birdman, but now is in washed-up state, and wants to reinvent his career by directing and starring a play, an adaptation of Raymond Carver’s short story What We Talk About When We Talk About Love. The play is produced by Riggan’s best friend Jake (Zach Galifianakis) and stars Riggan’s girlfriend Laura (Andrea Riseborough) and actress Lesley (Naomi Watts). Riggan’s daughter Sam (Emma Stone), a recovering drug addict, is also part of the production as Riggan’s assistant. But in the days leading up to play, the lead actor of the play gets injured and is replaced by a famous method actor Mike Shiner (Edward Norton), who himself is supercilious and high-headed. As the rehearsals carry on, Riggan is faced by one challenge after another; but primarily he has a difficult time adjusting with Mike who taunts him, and shatters his inflated ego. Whether he’s able to recover or goes further down into the slump is what you have to see in this darkly humorous and satirical tale.

Bursting and bristling with raw energy, Birdman plays around with the art of movie-making as you know it, and gives a new dimension to it. It surprises, challenges, and dazzles; sometimes all at once. It is zany, exhilarating, and an experience that you, in all likelihood, would have never had at cinemas. A caustic, and darkly funny look at the instant fame culture and celebrityhood in this day and age of facebook and twitter, it mocks at those who are prisoners of their own image.  But that’s not all. Birdman — if you can guess from its title — is sharply critical of the comic-book movies, and their makers/actors, who have abandoned  any real creative and artistic endeavorment for the sake of quick and easy money and fame.

Iñárritu and his maverick cinematographer Emmanuel Lubezky (Oscar winner last year for Gravity) create a sort of magic by which the whole movie from start to finish appears to be one single take. The camera, in Birdman, is a character in itself, flowing seamlessly with the story, wherein, sometimes it acts as the point of view for us, the audiences, and at other times, it appears to be residing inside the head of the characters — mostly Riggan’s. To add to this whole effect of razzle-dazzle, the background score is solely made up of drums, again completely synchronized with the story and its several moods (Note: I didn’t use the word scene since technically there’s only one). Irrespective of the techniques that were used to create this effect, the results are astounding (and in all likelihood it will be rewarded with Best Cinematography; come Oscar time).

As much as Birdman is a technical marvel, it would have been rendered a soulless piece of beauty without the extraordinary work of its actors. There isn’t a single frame where actors miss a beat, as if they are not acting, but rather performing to the tunes of  synchronized rhythm of an orchestra. And the leader to this group of chameleons is Michael Keaton, who in his career best turn as confused, frustrated, egotistical washed-up actor is thrilling to watch. Edward Norton, who plays his nemesis, is equally good, if not better. It is unfortunate that we had to wait so long to see both of these great actors in something that truly justifies their talent. Among the actresses, who don’t have as much to do as their male counterparts, Naomi Watts is brilliant and shows again why she, at 46, still remains one of the most sought-after actresses for high-prestige films in Hollywood. Arguably, she steals every scene (alas, there aren’t many) she is in. Emma Stone, Amy Ryan, Andrea Riseborough are all good.

Whether it be the innovative use of camera and music, or the stupendous performance of its actors, or just as a completely different movie-viewing experience, Birdman gives you several reasons to not miss it. So, in spite of a climax that might leave you slightly befuddled — I found it interestingly complex  – I highly recommend this once-in-decades cinematic experience.