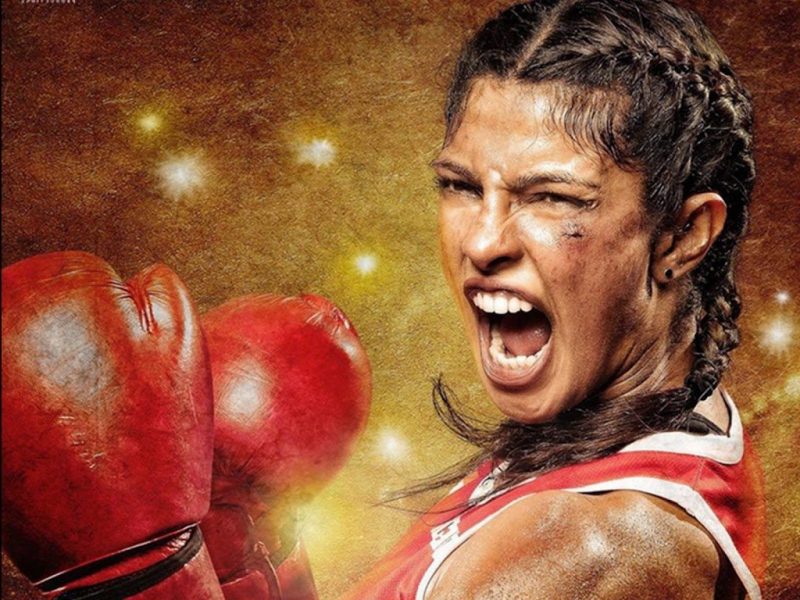 “Is there Salman Khan hiding somewhere behind ?” I said to myself.

Mary Kom is a film that exemplifies what is wrong with Indian cinema. The greed (or the fear) of box-office success has made Indian film-makers wimpy and myopic, so much so that even an inspiring real life-story couldn’t shake them out of their comfortable bubble that they have been living in. So, what do they do: stuff the film with over the top dialogues, slow-motion action scenes accompanied by loud music and a happy ending. And lo and behold, you have a hit film.

Hopelessly relentless in its hope to make senseless look sensitive, and fake look believable, Mary Kom is not just bad film-making, it’s also a shamelessly corrupt attempt at filling up the money-coffers by (pretense of) showcasing a life of struggle and courage. It’s one thing to take up an inspiring story to make a film out of it, and another, to actually make it look believable without going overboard or schmaltzy. At a time when masala films rule the roost in Bollywood and among audiences, it was only a matter of time when reality based films would also start getting treated with tinted glass of escapism, however ill-conceived it may look, sound or feel. It’s not that I don’t enjoy watching escapist cinema. It’s just that I don’t like watching respected real life figures distorted into caricatures.

Oh, did you think that’s this is one of those times when Bollywood gets serious ? Forget it. Mary Kom is no different from the countless Salman films you might have seen in recent years: bombastic, self-congratulatory, reality-effacing, and effortlessly dumb. Not only that, Mary Kom is replete with scenes that made me cringe in my seat. The scenes that have played so many times in hindi films before that instead of making a hero out of Mary Kom, they actually somehow belittle her gallantry.

Making a biopic in itself is no easy task, and when sports is thrown into the mix, it becomes doubly difficult. Pulling off sporting events realistically has to be one of the most, if not the most, challenging tasks in film-making, because audiences already know what a sports event looks like on-screen. To my mind except Chak De India and Lagaan, no Indian film has done it convincingly. Paan Singh Tomar did pull off the biopic part exceptionally well, but the portrayal of the racing events left a lot to be desired. So, just like Bhaag Milkha Bhaag last year, Mary Kom relies heavily on histrionics — most of the times unnecessary — of its character, forcefully created situations, an out-of-nowhere to-be-perceived villain. While Bhaag Milkha Bhaag at least carried a great leading turn by Farhan Akktar, Mary Kom has a miscast Priyanka Chopra, who more often than not, looks too glamorous for the part (Please note, I wrote “glamorous” and not “beautiful”. Mary Kom is beautiful but not glamorous). Not to mention, her all over the place North-Eastern accent is off-putting. I am sure makers could have found someone from north-east to play Mary Kom, if they wanted to, but then, that’s a little too much to expect — of course, any small actor wouldn’t have set the cash registers ringing — and anyway, who cares about authenticity. Right ?

At the end of the day, film-making is not a charity business. And neither, good intentions guarantee a good film. Had that been the case, every Mahatma Gandhi film would be a masterpiece and every Hitler film, a piece of trash. So, just because Mary Kom is such an inspiring figure who has overcome countless obstacles to bring glory for the country and herself, doesn’t mean Mary Kom, the film, gets a free pass. The only good thing about Mary Kom is that its a female-led film, which is a rarity in Indian cinema. But then, good intentions are one thing and artistic merits, another. Though, it seems the only intention of Mary Kom is to make money; which surely it will.