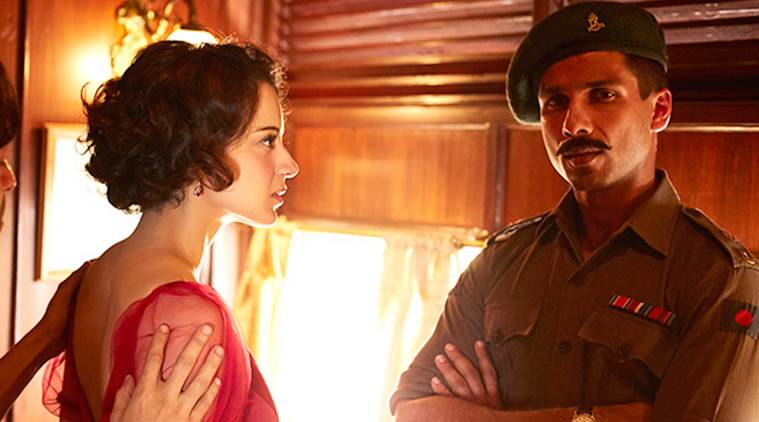 The film starts on a sombre note – with WW II in its full force and the Indian war of Independence gaining momentum – and an Indian soldier fighting for the British is captured by the Japanese on the battle field. The action very soon shifts to Bombay and its glamorous film industry where an action star Julia rules the box office and the hearts of the people. The opening sequence introducing Julia is one of the many highlights of the film. Rustom Billimoria, a former action star turned producer/mentor/lover to Julia, whom he bought from her mother for 1000 rupees when she was 14. The third angle in this love story is Jamadar Nawab Malik, an undercover INA cadet on a secret mission. From the trailer and promos you might have guessed by now what is the crust of the story and all you need to know that it involves a royal sword on which the lives of many people are dependent.

However it is when the journey to Burma starts via a train journey that the confusion starts to creep in. One has to assume they are taking the journey through the north eastern part of India as they pass through people speaking in Assamese, sceneries which reminds us of Arunachal Pradesh and a war torn village with a destroyed church, supposedly somewhere in Manipur. It will be an easy viewing if you don’t bother to care for the exact locations where the actions are happening. Speaking of locations the majority of the film is shot in the never before explored regions of Arunachal Pradesh, which almost becomes like the fourth major character. The story gets its look, mood and depth from the wild beauty of Arunachal’s flora and fauna.

To put it simply ‘Rangoon’ is a love triangle set in a war zone but it works on many different levels. As a period costume drama it is spectacularly glamorous and very effectively captures the 40s Bollwood era when free spirited women and not so broad minded men ruled the roost. The biggest achievement of the film is the story itself. Probably for the first time in cinematic history the Second World War gets an Indian interpretation and highlights the contribution and sacrifice of the Indian soldiers from the Northeastern region in the fight against the British Empire. The films also works as a reminder of the times we live in where freedom of expressions are curtailed and the film industry people unflinchingly insists on remaining diplomatic and more often than not give in to the demands of the suppressing force.

Coming to the actors, Kangana Ranaut is the real show stealer of ‘Rangoon’. Compared to her other roles she might seem a bit meek here but you have consider the fact that she is playing an Indian woman of the 1940s who was yet to learn about feminism and women empowerment and was just about starting to develop a mind of her own. Shahid Kapoor is in the prime of his career and can play almost anything with conviction now. Saif Ali Khan fits into the role of Rusi just like he fits into those tuxedos and looks effortlessly elegant. Richard McCabe who plays a Hindi speaking British officer gets some of the best lines in the film – “If the British ever left India this is going to be one of the most corrupt societies in the world”. Japanese actor Satoru Kawaguchi gives a heartfelt performance as a soldier to whom war is just a duty. Manipuri actress Lin Laishram makes an impressive Bollywood debut as Mema, the nurse. The music by the director Vishal Bhardwaj is as per the demand of the script and the background score is soulful and touching – in particular an Oriental/Japanese sounding tune which plays on regular intervals.

‘Rangoon’ is engrossing, romantic, colourful and heartfelt but suffers from the curse of the predictable climax and a poor ending, which seems to be a new trend in Bollywood by the way. If the ending was presented in a more clever way this could have been a perfect film. In what seems like an intentional shift, this is director Vishal Bhardwaj’s most conventional film till date but his auteur touch can be felt in the way he presented his characters and their yearnings. The best film of 2017, so far.