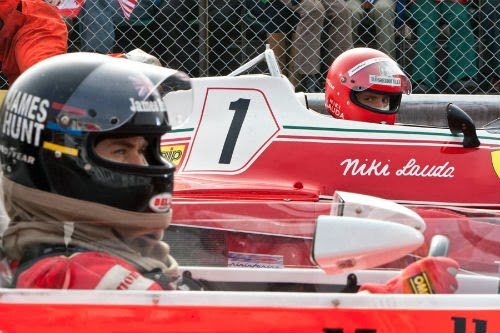 I am not a die hard Formula 1 fan, though I certainly am aware of racing know-hows and every once in a while indulge in the pleasures of this adrenaline kicking sports. On the other hand, I generally abhor films simply based on racing of any form since those are an apt playground for blowing up cars or bikes and filling the screen with all forms of junk. Therefore, even though I was looking forward to Rush, I was a little skeptical of its outcome. But now, having seen the film, I am happy to inform that Rush turned out to be the best [non-documentary (or rather, apart from Senna)] racing film I have ever seen. Period.

Having said that, I am also a little disappointed to report that all the effort in the film has gone towards the racing scenes, leaving rest of the film feeling starkly lightweight in comparison. Even though Rush is based on a true story, the plot feels contrived and situations manufactured, at times even outrightly predictable. Without a shred of doubt Rush is a technical marvel with its spell-bounding visuals and authentic, incredibly done sound design. You would not have seen or heard a more hair-raising sequence this year as the last couple of races in this film. But the question will linger, if that’s enough ? That will depend on how much are you willing to believe and submit to the characters in the film. And more often than not, especially during initial reels of the film, the “been-there-done-that” scenes prevent you from getting completely involved. And obviously, the conversations which quite clearly feel made-up, doesn’t help either. Though what does help is the fact that whatever happened or is going to happen, at large, is based on true story. Therefore, it’s the final third act, which mostly consists of three thrilling races will suck you in and even overwhelm you as it did to me.

All in all, Rush is triumph for director Ron Howard, for he managed to achieve some great, never seen before racing sequences. I think that’s what he went for, and that’s what he got; even if that meant side-lining the script. The film has quite a few winning moments, and it’s must-see for all the adrenaline junkies out there.