Movie That You Haven’t Seen, But Should: ‘The Shootist’ 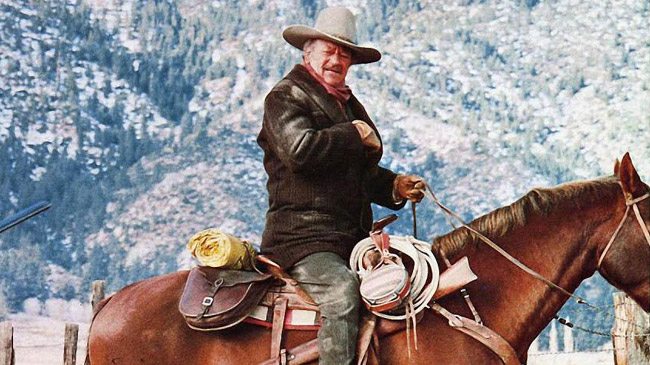 One of the great ironies of being an actor is that you are often not appreciated in your lifetime for being the artist you are. This is often worse if you are a major box office star, the critics tend to focus on the popularity rather than the art and miss what is often obvious to peers and directors. Such was the case with John Wayne, one of the greatest icons in film history, but who critics often disparaged for always playing himself, never evolving. Oddly after his death there seemed to be a rush to appreciate Wayne and his work, with at least ten performances singled out. Perhaps what the elitist critics forgot was that Wayne, as an actor, believed in the truth in his performance long before the method became popular, it meant everything to him to plant his feet, and tell the truth, in the words of James Cagney. Very aware of his limitations as an actor, knowing he would appear silly in a Shakespearean film, he stuck closely to what he knew best, making a few forays into other genres, sometimes with success, sometimes not. But in his element, usually the American western, he had no equal.

Wayne at six five, was a massive human being, with a deep rumbling voice and alpha male personality. Actors loved him because despite his star power and presence he was friendly and kind, and directors, those who knew and understood how to use him in their films adored his working habits, which was to do what they bid, trusting them. His best work came with John Ford, with whom he had a close relationship most of his career, Howard Hawks and Don Siegel. 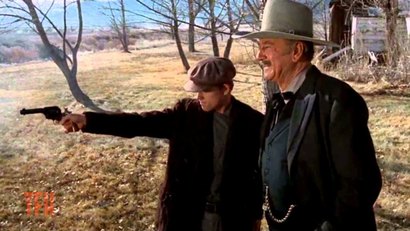 Though he would win his only Academy Award for his performance as Rooster Cogburn in True Grit (1969) it is commonly known around the business he should have won another for his work in The Searchers (1956) his greatest performance and earned at least a final nomination for his work in The Shootist (1976) one of the last great Hollywood westerns. Paramount dropped the ball on releasing The Shootist (1976), throwing into theaters during the summer months, mostly in drive ins, and very likely cost him an Oscar nomination. He was bitterly disappointed when he was not nominated believing he had given one of his finest performances.

It was also his final and perhaps most heartbreaking.

How ironic that Wayne portrayed a gunfighter dying of cancer when he himself was being ravaged by the disease once again. The shot was demanding on him and the director did his best to work with the actor to make it easy on him, but those who were there speak of the difficulty Wayne had throughout and of his courage in forging on when in terrible pain. As JB Books, Wayne is simply brilliant, portraying an old gunslinger who comes to a fast growing modern western town to visit a doctor he knew from his gunfighter days. Doc Hostetler (James Stewart) confirms what Books has been told by another doctor, he has cancer, advanced, and a few weeks to live. The pain has started and will get much worse, and though they control it with laudanum it will eventually become so bad Books will scream and beg for death. Telling him if he were a man like Books, he would not die a death like that plants a seed in Books mind and he leaves to find a room. 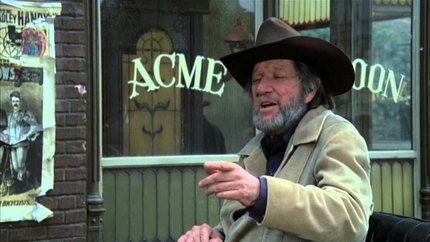 Making the decision to end his days in this town he takes a room with Mrs. Rogers (Lauren Bacall) under false pretense, but her reckless son Gillom (Ron Howard) finds out who Books really is, and idolizes the man. When an attempt is made on Books life he defends himself and kills the men in the room, which causes the other tenants to leave in fear. Mrs. Rogers demands that he leave and he tells her he is dying, which causes her to relent, and allow him to live out his few days in her room, under her care. They become uneasy friends. He becomes a surrogate father to the wild Gillom, teaching him how to shoot, not to drink and how to be a better man. Meanwhile Books is formulating a plan to avoid the pain he knows is getting worse. There are in the town three nasty characters, all known to be good with a gun. He challenges them all to meet him one morning at the local bar, in hopes he will be killed in a hail of gunfire. They all meet him and the older man kills them all, though not without being shot himself. However the bartender, shoots him in the back with a shotgun despite Gillom’s warning. The younger man picks up the weapon and shoots the bartender dead, then throws the gun across the bar in disgust, causing Books to nod his head in approval before he dies.

Wayne is superb in the film, portraying in his characters words a dying man afraid of the dark. He is vulnerable, afraid, haunted, sad, and incredibly brave as Books, finding joy in the smaller simpler things in life for perhaps the first time. There is a lovely scene where he invites Mrs. Rogers to take a ride in the wilderness with him in a carriage that is filled with hope and lost hope of what might have been in another time.

The casting of great actors around Wayne lends to the sense of nostalgia and melancholy within the film. There us a gentle and honest chemistry between he and Bacall that is lovely to behold, something suggesting in another time they might have fallen in love. Their goodbye scene is filled with sadness and longing. The film however belongs to Wayne and perhaps he knew this was his last movie when he was making it. He gives the part everything he has, and displays emotion and feelings we had not seen from him before. He is fearless to appear vulnerable and even weak on screen, and makes his character all the more human for doing so. He deserved that last nomination and the Academy should be ashamed not giving it; his two greatest performances both went without nominations.