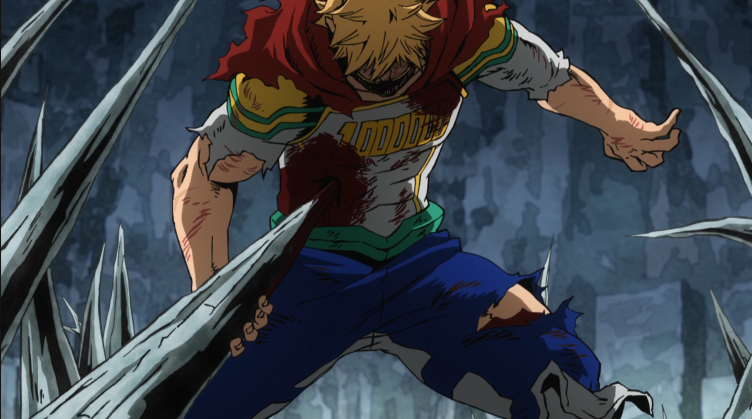 Unlike the previous episode, instead of taking a disoriented approach and drifting between several different narratives, episode 11 primarily focuses on Togata’s character, who finally catches up with Overhaul; bringing us the battle that we’ve been waiting for since the past 3 episodes now. But instead of being jam-packed with hefty action scenes that one would expect from a showdown between two of the most crucial characters, the episode almost takes a backseat with the animation and brings in more of an emotional appeal.

It cannot be denied that it is by far one of the most moving episodes of this season, but it’s almost surprising how compared to the previous action scenes—which were not even as consequential as this one—this one was heavily driven by stills and no actual movements.

The episode kicks off exactly where the previous one left. After being chivied by Toga and Twice, Mimic lashes out on the heroes and surrounds them with a stormy of flying debris. Meanwhile, Togata is finally able to catch up with Overhaul and unlike the last time, he does not hold himself back from protecting Eri. Overhaul just stands in shock and warns Eri to come back to him. But Mirio does not let her go and decides to face him head-on. This is when he unleashes his quirk and attacks Mirio. However, Mirio being in full control of his quirk, is able to dodge all of his attacks while protecting Eri.

Soon, even Kurono teams up with Overhaul and joins the battle. Mirio’s quirk works perfectly against the two of them and single-handedly he deals with them. But that’s when Kurono decides to trick him by firing at Eri instead of directly shooting him, and just to save Eri from the bullet, Mirio takes a hit. With this, he falls prey to Overhaul’s quirk and is eventually broken down with each hit.

Almost the entire first half of ‘Vermillion’ is dedicated towards Toga and Twice, and sheds some light on how they came to be members of Overhaul’s league of villains. Their dynamic duo adds some much-needed comical scenes to a very serious part of the story. At the same time, all this foreshadowing around their alliance with Overhaul will certainly become a major plot point much later. But apart from this, there are surprisingly no other character pairings in this episode. When it comes to Deku, he hasn’t really been spotlighted in any of the episodes so far and even in this one, he only gets to shine for a few minutes as he tries to break free from all the flying rubble that mimic throws at him.

The highlight, of course, is the titular character Togata, who stays way ahead of the squad and proves that he, too, was worthy of acquiring One For All from All Might. In fact, the kind of bravery that he shows, it makes you wonder if Night Eye was right all along about him. Togata selflessly puts the life of the little girl first and makes sure that Overhaul does not lay his hands on her again.

Through flashbacks, it is also revealed how much of a struggle Mirio has gone through just to master his quirk. If you think about it, compared to other heroes, his quirk is practically useless as it only allows him to pass through objects. It is, by and large, only a defensive quirk. But through a lot of work and determination, Mirio has made it an asset and he uses it in the best possible way to attack Overhaul. Unfortunately, in the end, he is forced to throw it all away for Eri.

Speaking of Eri, one can see how Overhaul has been brainwashing her all this while and has made her believe that she is nothing but a curse. Overhaul also finally confesses that she is not his daughter, which again, presents her origins as a mystery. Overall, I personally don’t expect every battle scene to have top-notch animation, but it was a little disappointing to see how this particular battle, which seemingly had a lot of gravity in context with an overarching plot, fell flat. Even so, the episode manages to portray a pleasant vitality around Mirio and his noble acts of heroism.