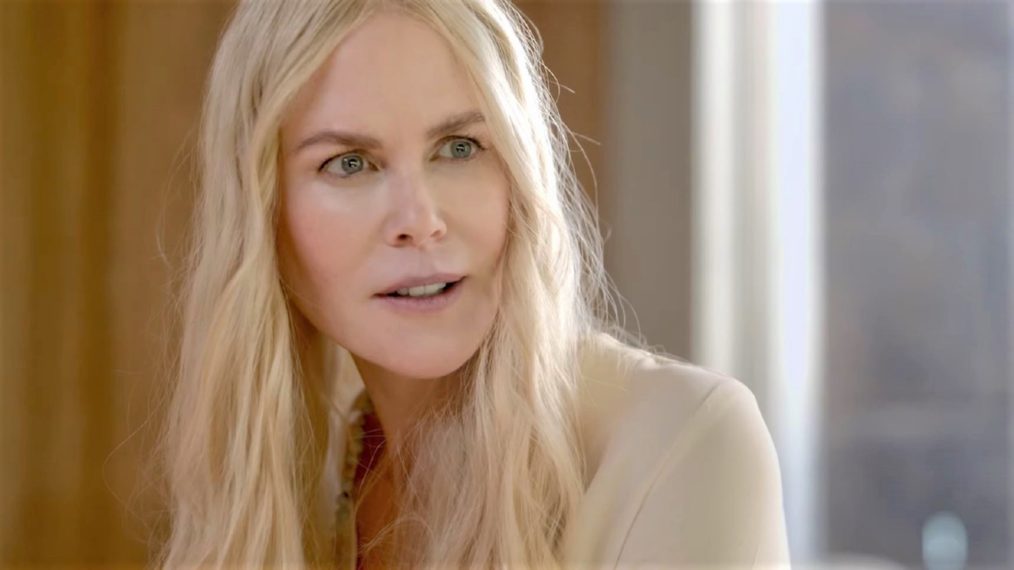 ‘Nine Perfect Strangers’ is a mystery drama on Hulu that centers around a mysterious retreat and the nine individuals that come there to attend a 10-day session, hoping to quell their internal demons. However, their expectations of spending languid days at a luxurious retreat are dashed when their guide and group leader, Masha, is revealed to be dosing them with drugs and hallucinogens as part of their treatment.

Things are beginning to get truly surreal in episode 5, and each of the characters begins to face truths that they have tried very hard to keep suppressed. The show is also exceedingly good at raising the stakes at the end of every episode, and the climax of episode 5 is possibly one of the best closers yet. Ready to dive in and untangle the mysteries of ‘Nine Perfect Strangers’ episode 5? Let’s get to it. SPOILERS AHEAD.

The episode opens on Zoe’s 21st birthday, where she is greeted in the morning by an apparition of her dead twin brother Zach. Calming her initial shock and fear, he wishes her a happy birthday, tells her that his death is not her fault, and asks her to stop telling people that they were not close (as Zoe often does whenever the subject of her late brother is broached).

At breakfast, the other group members discuss the surreal dreams that they’ve all been having, including Lars, who describes giving birth to Tony’s child in his dream. Frances, who comes in late for breakfast, appears visibly dazed and passes out at the table. She hallucinates a visit from Paul, the man she had an online romance with. In her vision, Paul blames Frances for being a phony who only writes lies.

The rest of the day remains surreal, and each member grapples with their demons that are now making themselves increasingly obvious. Tony admits to Frances that he doesn’t want to deal with the pain from his past and that he might not “make it.” Ben and Jessica think about giving up all their money and going back to the simple times when they first started dating.

We also see Masha and Delilah share an intimate conversation, where Delilah asks the group leader to stop sleeping with Yao and then kisses the surprised Masha on the lips. Finally, after seeing Ben and Jessica making love in the common pool, Carmel lets out her frustration about every other couple being happy and “normal” except for her and is comforted by Lars.

Evening comes around, and the group collects to celebrate Zoe’s birthday. Everyone seems relatively relaxed except for Heather, who is still a little shaken from hearing her son’s voice and then jumping off a cliff into the lake with Napoleon. After Zoe’s birthday speech, Napoleon begins to sing a song, and slowly, the guests begin pairing up and dancing.

Amidst the light atmosphere, Zoe notices her brother sitting some distance away, holding a candle. Masha notices Zoe staring away at a distance and seems to realize what the young girl is seeing. She comes over and whispers in Zoe’s ear, and the episode closes with a vision of Zach sitting, holding a candle. So what exactly does Masha whisper into Zoe’s ear?

Though she speaks in Russian, her words are translated as: “It’s You. You’re the key.” These simple words, and Masha’s expression of surprise and pride before, seem to tell us that she actually knows that Zoe is hallucinating and also that she can see her dead brother Zach. More importantly, she calls Zoe “the key,” meaning that Masha has been searching for a specific person who seemingly has the powers to see spirits.

Though we don’t know the reason behind her search, this opens the plot to a much deeper level and throws some light on Masha’s possible motivations behind setting up Tranquillum House and dosing her clients with drugs. Perhaps this whole time, she has been looking for a person who is “the key” and has finally found it in the unlikely character of young Zoe. Of course, what Masha will do with this “key” remains an ominous question that will likely be answered in upcoming episodes.

Is Zach Marconi at Tranquillum House?

At the beginning of the episode, Zach tells Zoe that she shouldn’t blame herself for his death. Therefore, we know for certain that Zach is dead. The fact that in addition to Zoe, even her mother repeatedly hears Zach’s voice seems to hint at the possibility of something unnatural going on. However, this could all be attributed to the effects of the psilocybin, which also results in Frances having a vivid hallucination about Paul.

What makes things truly spooky is when Masha, at the end of the episode, asks Zoe whether she can see “him” (referring to Zach). This means that Masha, too, is aware of the dead boy’s presence and seems to hint that Masha, apart from all her mysterious and experimental procedures, also dabbles in aspects concerning the spirit world. This could be a result of her near-death experience. Alternatively, we see a brief flashback of a man dying at Tranquillum House, and though his fate is not revealed, it is possible Masha delving into the spirit world is somehow related to a death that took place at her retreat.