The Underrated (VI): ‘Nixon’ is an Excellent Biopic on America’s 37th President 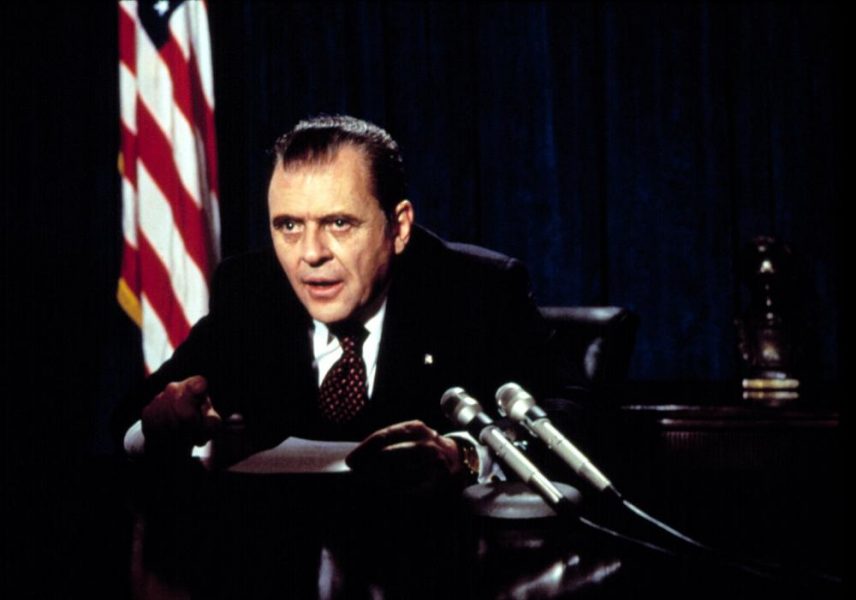 A biographical film should be so much more than just a mere greatest hits of the subjects life; it should be willing to explore their life warts and all, showing their weaknesses and dark side because it is those as aspects that make us human. And forget physical resemblance, you want someone who is going capture the soul of the subject, not necessarily their looks. Though acclaimed with eight Academy Awards, Gandhi (1982) to me is not a great film because there were entire aspects of the Mahatma’s life left out of the film, and what was presented was essentially a man who did everything short of walking on water! While Ben Kingsley was terrific in the movie, director Attenborough did not believe enough in his subject to think audiences could handle anything that painted him in less than a saintly light! Such things as Gandhi sleeping between two teenaged girls to test his celibacy, or not allowing his wife life saving medication would have given greater insight into the man, but the director was not interested in making an honest film. That is the trouble with many biographies made through Hollywood history, they do not dig deep into the character.

Spike Lee did with Malcolm X (1992) which seemed to give others the courage to do the same. It was nothing but refreshing. The film was brutally honest about its subject, something Attenborough had not been about Gandhi (1982).

Oliver Stone did not have that trouble with his outstanding film about disgraced President Richard Nixon, casting Anthony Hopkins as Nixon. Looking nothing like Richard Nixon, Hopkins went deeper, capturing the stoop, the eyes, that world weary manner in which he spoke, and the fact he never felt quite good enough for office, forever in the shadow of the Kennedy’s. And of course there was that dark side, that paranoia that not even Nixon could seem to control, and which would bring about his downfall.

The film explores Nixon’s life while in the White House via flashback, focusing on such moments as his defeat to Kennedy, the move to the Presidency in 1968, winning again in 1972 by the greatest landslide in American political history, Viet Nam, the famous Checkers speech, and of course Watergate. For all his flaws, and there were many, Nixon was a great President, opening both communist China and Russia, and ending Viet Nam (after he had escalated it). He did often the impossible, things the common man, which he considered himself could not accomplish but did. It was often said about Nixon that he had greatness in his grasp but was undone by his own demons. I believe that, but history has shown he was a great President. Every single man who followed him as President would at some point seek his counsel on matters of foreign policy, remembering his staggering gifts in that area, remembering he opened China and Russia. At his funeral five US Presidents eulogized him, thus bringing to light Kissinger’s prediction that history would remember him as a great man, a great President.

He was by all accounts a cold and distant man, not one to show affection or appreciation easily, yet he felt it. On the eve of his resignation from the Presidency he and Henry Kissinger (Paul Sorvino) fall to their knees and pray in the White House, Nixon fearful his legacy will be one of lies. How could he know worse would follow him (George W. Bush)?

Hopkins does what a great performer should — he finds the wounded soul of the character and makes it visible to us. It is never that he looks like Nixon, though there are moments you would swear it is Nixon you are watching, it is that he finds the soul, that broken ashamed soul of the man who could never believe he was good enough for the life he led. There is a telling moment when he stands in front of painting of Kennedy and says out loud, “When they see you, they see who they want to be, when they look at me they see what they are.” At a startling sequence based on a true happening, Nixon slips out of the White House alone before dawn, to the Lincoln Memorial where he encounters a group of hippies who question him about the war, one young woman saying candidly, with growing knowing, “You cannot stop can you, even if you wanted too.” Yet he is most like Nixon during the quiet moments with his wife Pat (Joan Allen) who wanted to love him, and wanted to be loved by him, but was kept at a distance. Their’s is a strange marriage, more of a partnership than anything else, but she stood by him, through all of it.

Told in flashback the film utilizes various forms of film, video and stock footage from the past in its presentation, and it cut together with speed. At the center of this is Hopkins as Nixon, struggling to see his faults, unable to understand why when given the chance his enemies come at him.

In the end, Stone gives us a deeply moving portrait of a man who rose to the highest office in the land, perhaps in the world, and in moments of weakness, lied, when all he had to say, “yes, I did what I felt I had to do”. There was always something sad about Nixon, something we did not understand him, and Hopkins does a magnificent job bringing that to the character.